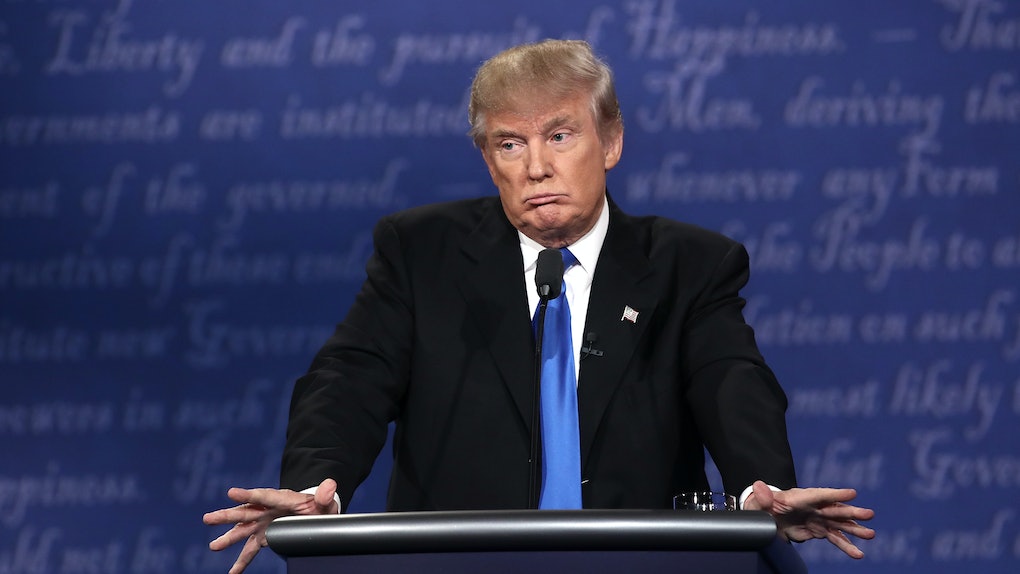 The possibility of presidential impeachment has been a hot topic since President Donald Trump took office back in January 2017. Since then, the president has tirelessly defended himself from criticism, denying any and all wrongdoing that could lead to his removal from office. However, there's a new situation that appears to have him so rattled that Donald Trump thinks impeachment is a "real possibility," according to a new CNN report. Elite Daily reached out to the White House for further comment on the report, but did not immediately receive a reply.

On Monday, Dec. 10, a source told CNN that Trump has been concerned about what might happen when Democrats take the House in January. While the source noted that the president isn't totally sure that impeachment proceedings are a guaranteed thing, there are reportedly growing concerns in the White House that his sex scandal could lead to such an outcome.

The scandal has become a fresh topic as of late, spurring from a Dec. 7 filing from prosecutors in the Southern District of New York. The filing alleged that, in 2016, Trump directed his then-lawyer Michael Cohen to make illegal payments to two women who claimed they'd had affairs with him in an effort to save his presidential bid. (Trump has denied the claims, but admitted to reimbursing Cohen for the payment.) Trump, reportedly referred to in court filings as "Individual 1," has come under scrutiny for a plan to build a Trump Tower in Moscow which, per Cohen, continued on past the point when Trump was the presumptive 2016 Republican presidential nominee. While the real estate deal was not illegal, it does provide evidence that Trump had interests in Russia while a presidential candidate. The White House did not reply to Elite Daily's request for comment regarding the plea deal including Cohen's claims.

On Dec. 7, prosecutors recommended Cohen receive a "substantial sentence" — and naturally, talks about possible repercussions for the president soon followed. Democrats have since suggested that Trump committed "impeachable offenses" and could also be jailed after his term is up. As of Dec. 11, there have been no formal moves to impeach Trump.

It has also been speculated that Trump could be impeached for matters related to Special Counsel Robert Mueller's ongoing probe into potential collusion between Russia and members of the 2016 Trump campaign. However, Trump has repeatedly denied any wrongdoing, calling the investigation an unfair "witch hunt" against him and accusing those involved of "presidential harassment." In an August interview with Fox & Friends, he questioned the calls for his impeachment altogether, saying, “I don’t know how you can impeach somebody who’s done a great job.” Trump added:

If I ever got impeached, I think the market would crash. I think everybody would be very poor because without this thinking you would see — you would see numbers that you wouldn’t believe in reverse.

It seems like he might've been on to something, as there are also concerns in Congress of what may happen if there's a move for impeachment. “I think it’ll help the president get re-elected,” Senate Majority Leader Mitch McConnell speculated to the Associated Press on Dec. 11. “This business of presidential harassment may or may not be quite the winner they think it is.” A source also told CNN that the president's alleged role in the sex scandal might not be significant enough to ignite a bipartisan vote for impeachment in the Senate.

It's anyone's guess where it'll go from here, but if Trump is as shaken up as reports say, there's some real drama ahead. Get ready.