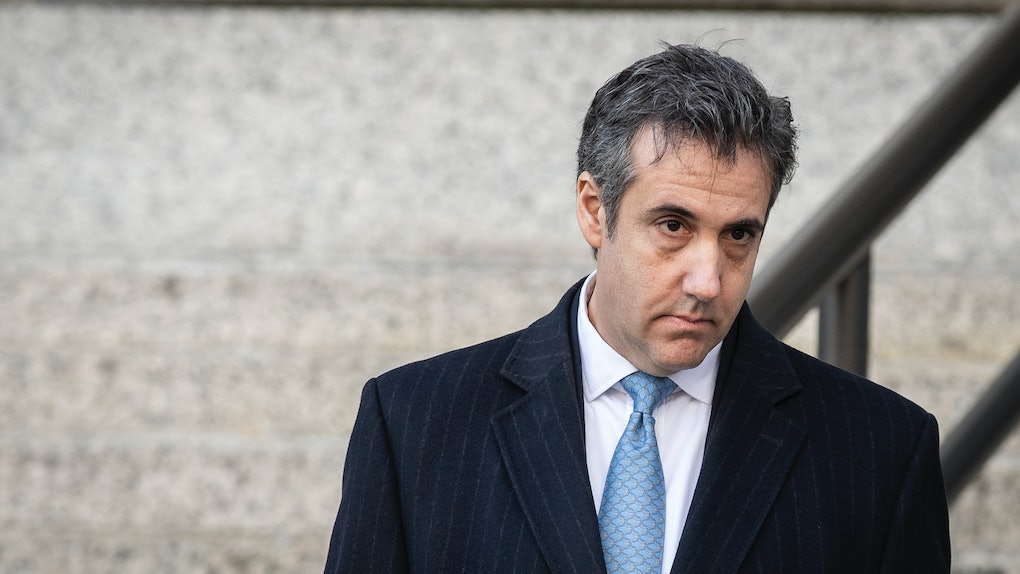 What Does The Cohen Sentencing Memo Mean For Trump? It Could Be Bad

It's probably safe to say that it's been a wild few weeks for President Donald Trump. His former longtime lawyer Michael Cohen and his legal drama has dominated headlines as of late — and things haven't changed as of Dec. 7. On Friday afternoon, federal prosecutors turned in a sentencing memo for Cohen that not only provides more details of the attorney's apparent crimes, but also appears to implicate the President. So, what does the Cohen sentencing memo mean for Trump, you ask? It might not be good.

At first, you'd probably think it doesn't mean much, because prosecutors from the Southern District of New York recommended a "substantial" prison sentence for Cohen, despite the damning information he shared on Nov. 29 regarding the ongoing Russia investigation. However, the Dec. 7 filing from the Office of the Special Counsel reveals Cohen's cooperation in the Russia investigation.

Cohen's guilty plea from Nov. 29 included admissions from Cohen that he made false statements to the Senate Intelligence Committee about plans for a Trump Tower deal in Moscow, which Cohen said ended before the presidential campaign, although it continued well into 2016, per The New York Times. Neither Cohen's representatives nor the White House had responded to Elite Daily's requests for comment about the guilty plea as of publication.

The Dec. 7 filing is a recommendation from the SDNY prosecutors based on one guilty plea from Cohen regarding campaign finance violations and other financial crimes, and a second guilty plea about lying to Congress regarding Trump Tower Moscow plans in 2016. (The Office of the Special Counsel [OSC] did not give a specific recommendation regarding Cohen's sentencing.) In the OSC filing on Dec. 7, Cohen's false statements to OSC about his discussions of Trump Tower Moscow were described as having "obscured the fact that the Moscow Project was a lucrative business opportunity that sought, and likely required, the assistance of the Russian government." With "Individual 1" known as President Trump, the OSC writes,

The fact that Cohen continued to work on the project and discuss it with Individual 1 well into the campaign was material to the ongoing congressional and [OSC] investigations, particularly because it occurred at a time of sustained efforts by the Russian government to interfere with the U.S. presidential election. Similarly, it was material that Cohen, during the campaign, had a substantive telephone call about the project with an assistant to the press secretary for the President of Russia.

Basically, the OSC contends, "If the project was completed, the [Trump Organization] could have received hundreds of millions of dollars from Russian sources in licensing fees and other revenues," and Donald Trump was apparently in the loop concerning the discussions, per the memo. Elite Daily reached out to the White House for comment on the OSC's claims regarding Trump Tower Moscow, but did not hear back at the time of publication.

The OSC memo from Dec. 7 also details an incident in 2015 when Cohen spoke to a Russian national who claimed to be a "trusted person" who could offer Trump's campaign "political synergy," per CNN. Additionally, a September 2015 appearance on Sean Hannity’s radio show saw Cohen claim, "There’s a better than likely chance Trump may even meet with Putin when he comes here [for the UN General Assembly]." Per OSC's Dec. 7 memo, Cohen reversed his initial claim at the time that it was a "spontaneous" statement, telling the OSC that it actually came about after discussing it with Trump, per CNN. That meeting with Putin never happened, but per CNN, Cohen relayed to the OSC that it never happened because he was discussing the Moscow project "with a different individual who Cohen understood to have his own connections to the Russian government." Elite Daily reached out to the White House for comment on Cohen's claims in the OSC memo, but did not hear back at the time of publication.

As for the campaign finance issues, the SDNY filing on Dec. 7 suggests that Trump had a role in Cohen's illegal payments to two women who claimed they'd had an affair with the Trump ahead of the 2016 election. Trump has vehemently denied both alleged affairs, but admitted to reimbursing Cohen for the payment. According to The New York Times, however, the document says Cohen "acted in coordination and at the direction of" an unnamed person, seemingly referencing Trump, which echoes previous claims made by Cohen. In part, the incidents "bare the most direct evidence to date linking Mr. Trump to potentially criminal conduct," the NYT reports. Elite Daily reached out to the White House for comment on the reports that Cohen apparently acted at the direction of Trump, but did not hear back at the time of publication.

It's unclear what that could totally mean for Trump, but for Cohen, along with some separate charges, SDNY prosecutors have recommended a "substantial" sentence of four years in prison. Oof.

Trump, however, appears to be all but startled. On Friday evening, he took to Twitter to dismiss the news, writing, "Totally clears the President. Thank you!"

White House Press Secretary Sarah Sanders also brushed off the filing, saying in a statement shared with the NYT on Dec. 7,

The government’s filings in Mr. Cohen’s case tell us nothing of value that wasn’t already known. Mr. Cohen has repeatedly lied and as the prosecution has pointed out to the court, Mr. Cohen is no hero.

Elite Daily reached out to the White House for further comment on Mueller's sentencing memo regarding Cohen but did not hear back at the time of publication.

If you somehow missed it, this whole saga is about Cohen's campaign finance violations and other financial crimes, as well as his alleged lying to Congress about Trump's business affairs ahead of the election. To summarize, it's been nothing but a rollercoaster for the past few months with really wild turns in between.

That said, Cohen will be sentenced on Wednesday, Dec. 12 for his crimes, but I have a hunch that that won't be the end of this drama. We'll see.