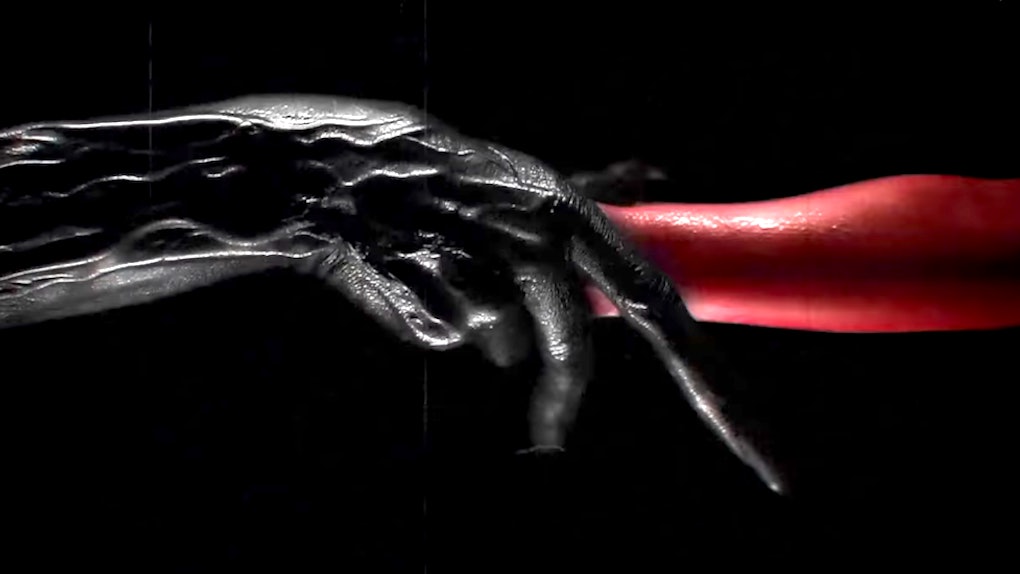 Who Is The Black Hand In 'AHS: Apocalypse'? Fans Have A Theory About The Mysterious Figure

The details about American Horror Story: Apocalypse are finally starting starting to come together, but one enigmatic force that has been at the center of all the new season's promo art and teasers is still shrouded in mystery. The upcoming season just dropped its second teaser trailer recently, which features a veiny black hand reaching out to grasp the hand of a baby. This black hand was also featured in the first teaser and all of the promo art for the season... so who is the black hand in AHS: Apocalypse? Fans are starting to theorize about whom that mysterious hand belongs to.

Two of the images that have been constant throughout all of the promo for American Horror Story: Apocalypse are a newborn baby and a demonic looking pitch-black hand. In the first trailer, which was released earlier this week, this black hand seems to be the force controlling the apocalypse, as it flips over an ominous hourglass containing a mushroom cloud and a deluge of skulls. Before that trailer came out, the promo art showed this same black hand interacting with a blood-red baby. Now, we are seeing this hand reach out to the baby yet again.

In the newly released second teaser for AHS: Apocalypse, the black hand reaches out to grasp a baby's hand, and once the two hands touch, a nuclear explosion goes off in the background and the baby's arm turns red. Check out the new teaser for yourself below:

From everything that we have seen so far, it seems pretty clear that the titular apocalypse in AHS: Apocalypse will come about due to an interaction between this baby and this black demonic creature... but who could these characters be? Well, the baby seems pretty self-explanatory: Ryan Murphy has already confirmed that Michael Langdon, the antichrist born at the end of AHS: Murder House, will star in the new season. Although we last saw Michael as a child, he will be an adult in Apocalypse, played by Cody Fern.

Obviously, having an antichrist confirmed for the season immediately points to him as the person bringing about the apocalypse. The babies that we have seen throughout the Apocalypse promotion cycle are very likely meant to represent Michael Langdon. But this most recent teaser seems to suggest that Michael may not full realize his malevolent potential until he me meets up with this mysterious black being.

This malevolent force that will help Michael Langdon truly become the antichrist and bring about the end of the world definitely does not appear to be human. Many fans are assuming that the black hand belongs to Satan, which seems to make the most sense from what we currently know, but that is not for sure. Since we have seen the hand nurturing the baby throughout the promotion, it may also be representative of a character who has nurtured Michael's evil since birth... like Constance Langdon, perhaps? Jessica Lange is confirmed to reprise that role, so it is possible that Constance could be the one who aids Michael's apocalyptic efforts.

We will find out the truth when American Horror Story: Apocalypse premieres on FX on Sept. 12.

More like this
This 'Stranger Things 4' Theory About Eleven's Past Is Super Dark
By Ani Bundel
The 'Cruel Summer' Season 1, Episode 5 Promo May Hint At That Mirror Theory
By Rachel Varina
Lana Condor's Career Goals Are All About Representation — EXCLUSIVE
By Rachel Varina
Stay up to date