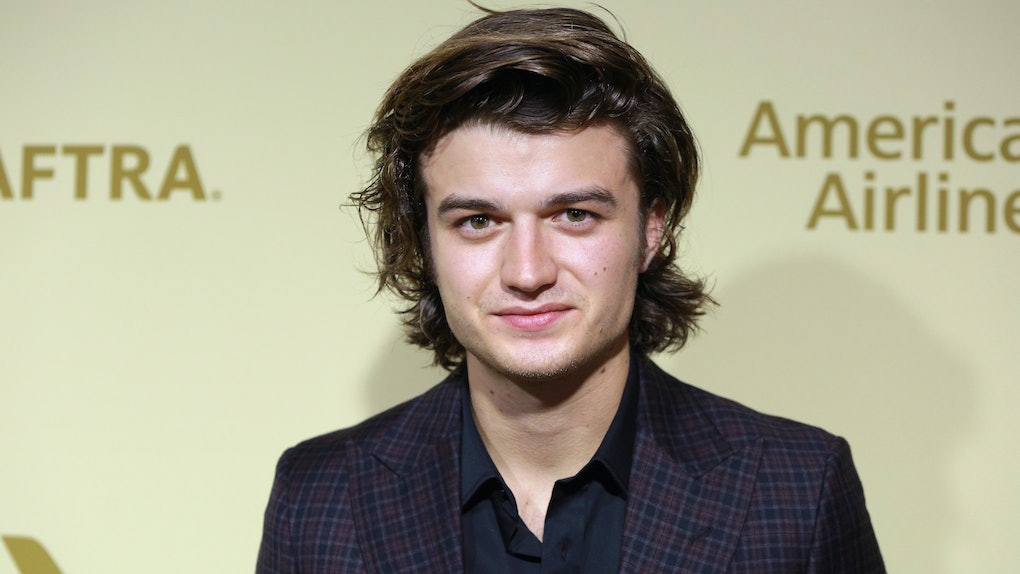 Who Is Steve On 'Stranger Things'? 11 Things To Know About Joe Keery

It's almost time to say goodbye to everyone you know in order to lock yourself in your room to binge Season 2 of Stranger Things. Season 1 proved to be a knockout and fans are obsessing over the amazing cast. Whether you seek #JusticeforBarb or snack on frozen waffles like Eleven, it's hard to pick a favorite character. Fans have definitely been obsessing over Nancy Wheeler's boyfriend, Steve Harrington. He has proven to have more layers than the typical high school bully and people are here for it. Who is Steve on Stranger Things IRL? His name is Joe Keery and his hair is just as breathtaking as it is on screen.

With Season 2 of Stranger Things premiering on Oct. 27 — and a love triangle brewing between Steve, Nancy, and Jonathan — I'm sure we're going to be seeing a lot more of Keery. Get to know him before the big premiere. Below are 11 things to know about real-life Steve.

1. He Loves The Internet As Much As We Do

A fan theory started circulating that Steve on Stranger Things is actually a young Jean-Ralphio from Parks and Recreation. Yeah, the show with Amy Poehler. The theory started because they look exactly alike and have similar, douchebag qualities. Plus, both fictional towns are located in Indiana, so there's no reason they couldn't be connected.

Well, this theory made it all the way to the top because Joe Keery and Ben Schwartz (who plays Jean-Ralphio) actually met, took pictures together, and made everything feel right in the world. Ben Schwartz went on The Late Show with James Corden and confirmed Jean-Ralphio is indeed Steve's father.

2. He's Close With His Co-Stars

Keery is constantly posting pictures with his Stranger Things co-stars. His social media accounts are full of him and various cast members hanging out and doing weird sh*t. For example, above, Keery and Finn Wolfhard (aka Mike on Stranger Things) are hanging out with a couple of dogs, looking stoic AF.

Keery told The Boston Globe in 2016 that he didn't have to do much research to get into character. He said he was already well-versed in popular '80s movies like The Goonies and E.T. He even admitted,

All of the John Carpenter movies scared the crap out of me when I was a kid.

It's funny because many of those classics helped to inspire Stranger Things.

Besides Stranger Things, Keery was featured in a Ferris Bueller's Day Off-inspired ad for Domino's and killed it. Everything from his hair to acting to his running montage was spot on. Bueller? Bueller?

Turns out Keery is more than just a pretty head of hair — he's a seriously gifted musician. Keery plays drums for Post Animal, a psych-rock band based in Chicago. Although he's not in recent band photos (I'm assuming because he can't tour and film Stranger Things), I'm sure he's always invited back for a jam session or show. If Keery wasn't dreamy enough, being in a band scores him some major points.

6. Newburyport, Massachusetts, Is His Hometown

Just a small-town boy. Keery grew up in Newburyport, a city just north of Boston, Massachusetts. According to The Boston Globe, he graduated from Newburyport High School in 2010 and went on to DePaul University — which explains his Chicago and Post Animal ties.

According to Keery's Wikipedia page, he was born on April 24, 1992 — making him 25. His zodiac sign is Taurus. JUST LIKE MINE, NBD. Will someone who knows anything about zodiac signs tell me if this is a good thing?

8. He Loves His Fans

No amount of fame can change the love he has for his Stranger Things fans. Besides the kind words, Keery actually replied back to basically everyone who commented on his original tweet above. Classy.

9. He Plays An Amazing Bad Boy Who We All Love

We all know Steve started off in Stranger Things as a huge *sshole. Let's just get that in the open right now. However, he really began to redeem himself — it's tough to play a character with so many layers. I think his brush with the Upside Down put some things into perspective. Let's see if Steve can behave himself in Season 2.

10. He Credits His Sister For His Acting Career (And Twitter Skills)

Keery told The Boston Globe in 2016 that he credits his sister Caroline for getting him into theater and acting. He said, "She did high school plays. She’s kind of was the one who dragged me along.”

11. He's Starring In An Upcoming Movie With Chance The Rapper

According to IMDb, Keery is starring in the movie Slice alongside some big stars. Zazie Beetz and Chance The Rapper are just a couple of his talented co-stars. The description of the plot reads,

When a pizza delivery driver is murdered on the job, the city searches for someone to blame: Ghosts? Drug dealers? A disgraced werewolf?

Hmmm... sounds juicy. According to the page, Slice is in post-production, so we should be seeing more about it in 2018.

If you weren't obsessed with Joe Keery before, you definitely should be now. Check him out in Season 2 of Stranger Things that's coming out so, so soon. Also, you're welcome for you new celebrity crush.

More like this
These Tweets About Regé-Jean Page Leaving 'Bridgerton' Are Royal Bummers
By Cianna Garrison
Colton Underwood Is Reportedly Making A Netflix Show After Coming Out As Gay
By Dylan Kickham
'He's All That': Premiere Date, Cast, Trailer, Filming News, & More
By Dylan Kickham
Stay up to date