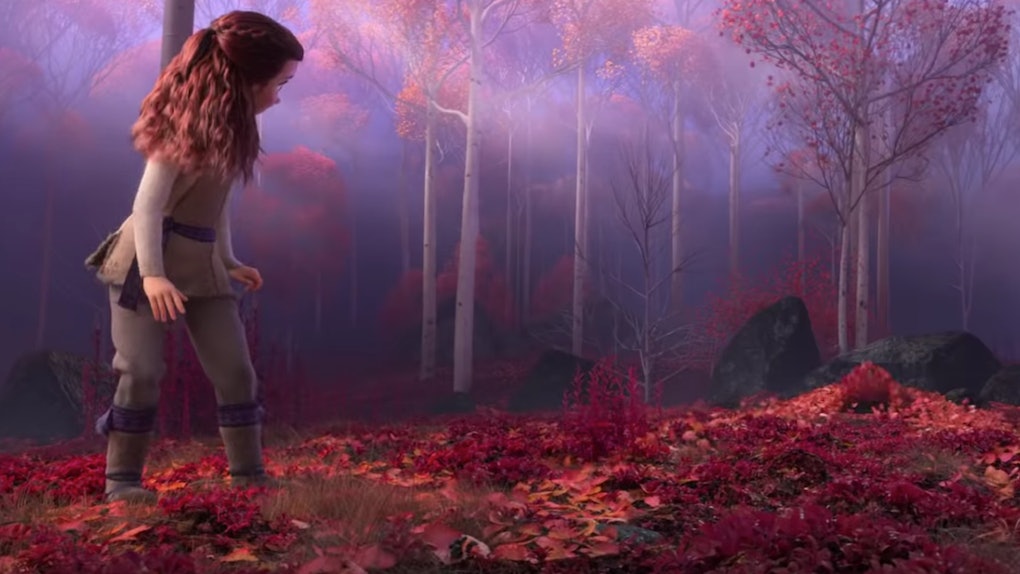 Who Are The New 'Frozen' Characters? 2 New Faces Were Revealed In The Sequel Trailer

The first Frozen 2 trailer dropped, which means just one thing: Disney fans everywhere are rushing to mine the two-minute video for as many details about the sequel as possible. One major detail that popped right out is the appearance of two brand new characters. But, who are the new Frozen characters? Fans who watched the trailer have a bunch of theories.

The trailer doesn't offer many specifics about the plot of the new movie, but it does set a truly epic tone. The first movie's main characters Elsa, Anna, and Kristoff, set off on what looks like a high-fantasy adventure far beyond the walls of Arendelle. The majority of the trailer features shots of the trio we know and love, along with Olaf the snowman and Kristoff's trusty reindeer buddy, Sven. But, there's also one blink-and-you'll-miss-it scene that offers audiences a glimpse at two never-before-scene characters. While the first movie had an icy blue color palette, the trailer for Frozen 2 shows a much more autumnal-themed landscape. In one of the many fall forest scenes of the trailer, there's a quick shot of a curly red-haired girl turning to watch a blonde boy get catapulted from a pile of leaves. You can spot them at minute 1:24 in the trailer below:

Disney hasn't confirmed any details about these characters' names or who will be voicing them, although there's a possibility that they're the new characters voiced by Evan Rachel Wood and Sterling K. Brown. Fans took to Twitter right away to throw their theories about the identities of the characters into the mix. Many noted that the girl and boy look fairly similar to the Frozen franchise's resident lovebirds.

Since the new characters do share the same hair colors as Anna and Kristoff, respectively, there is the possibility that they are their kids. But, then again, unless there's a huge time jump at some point in the movie, it doesn't really make sense that their kids would be so grown. But, the family resemblance between the new character and Anna could point to another possible answer. These characters could be Anna and Elsa's parents in a flashback, when they were young.

Frozen songwriter Kristen Anderson-Lopez said to Variety last year the sequel will dig into more of Elsa and Anna's identities and their family history. She specifically said, "We know the parents a lot better.” Could that mean that audiences will learn more about the king and queen of Arendelle through flashbacks? Besides the fact they disappeared at sea during a storm, the first movie didn't give much info about their backstory. There seems to be some magic surrounding the mysterious characters (since when do non-magical piles of leaves shoot people into the air?) so perhaps Elsa and Anna's parents' had some magic that they passed on to their daughter.

There's one more fan theory about the characters that also focuses on what seem like some seasonal magical powers: The female character in question is Elsa's girlfriend, and they can control the weather together.

Fans have been practically begging Disney to give Elsa a girlfriend since the first movie premiered, so it's not unexpected many folks jumped at the possibility that a new female character could be Elsa's love interest.

No matter who the new characters are, it's exciting to see the lore of the Frozen world expand beyond the wintry scenes in Arendelle. This trailer shows brand new lands for the characters to explore, while hinting other people in the world can possess the kind of magic Elsa has. I know I'll be first in line to see how all these characters interact when Frozen 2 hits theaters on November 22.