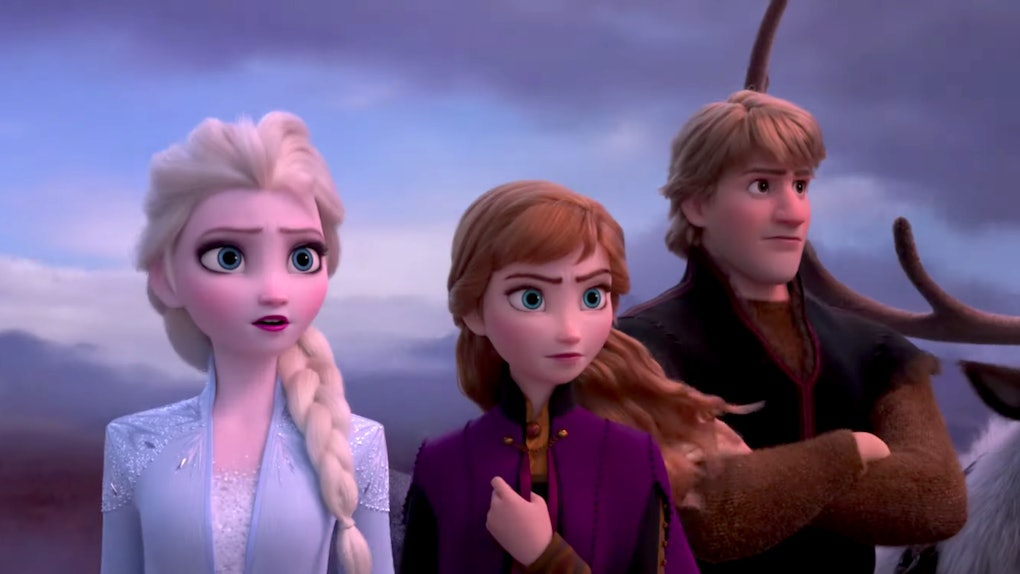 If you thought the sequel to Disney's 2013 hit Frozen was going to be another relatively lighthearted princess movie, think again. The animation studio just released the first trailer for Frozen 2, and it is way more epic than anyone could have predicted. The two-minute trailer feels more like a high-fantasy, apocalyptic epic on the scale of something out of the Marvel sector of Disney rather than the animation side. Elsa uses her icy powers to run across a dark and unforgiving ocean, Kristoff leads a heard of ferocious reindeer into battle, and Anna leaps off an ominous cliffside covered in fog and darkness. Yeah... this is definitely not the Frozen that anyone was expecting!

While the first Frozen film definitely had its moments of darkness — parents dying at sea, a daughter isolated by her inability to touch others, and a double-crossing prince who feigns love in order to steal power — Frozen 2 looks like it will double down on the edginess of the franchise. The trailer seems to be hinting at more of a perilous action-adventure feel than anything else, full of grand and dangerous scenery unlike anything in the first movie. The trailer ends with a majestic shot of Elsa, Anna, Kristoff, Sven, and Olaf looking out over a far-reaching autumnal forest.

Check out the newly released Frozen 2 trailer below:

Although this new trailer will definitely give fans a feel for the exciting new direction that Frozen 2 will take in terms of genre and style, it does not reveal much in terms of what the movie's plot will be. The first movie saw Elsa mastering her ice powers and bonding with her sister Anna, as the two ended the film ruling over the now peaceful kingdom of Arendelle. It seems clear that Elsa and Anna will be far from Arendelle in Frozen 2, though. The trailer suggests that the sequel will follow more of a journey or quest narrative, as the sisters along with Kristoff, Olaf, and Sven traverse dangerous lands for some reason.

Adding to the excitement for Frozen 2 are the still mysterious new characters that the sequel will introduce. Westworld star Evan Rachel Wood and This Is Us lead Sterling K. Brown are both signed on to voice undisclosed characters in the upcoming sequel. There is a brief clip of a young girl and a man swept up in a gust of leaves in the trailer who appear new to the franchise, but of course, there is no way of knowing yet whether those could be the new actors' roles. Frozen 2 will likely introduce some new villain, as is customary in Disney's animated princess films, so perhaps Wood or Brown will be voicing Elsa and Anna's new adversary.

Thankfully, fans have less than a year to wait for Frozen 2. The upcoming Frozen sequel is slated to be released on Nov. 22, 2019. Hopefully we will get more details about what the new movie will be about in the coming months while we wait.

More like this
Emma Stone's 'Cruella': Premiere Date, Trailer, Cast, Plot, & More
By Abby Monteil and Dylan Kickham
The 'Zola' Movie Trailer Will Have You Reliving The Iconic Twitter Story
By Dylan Kickham
Where Is The 2021 Oscars Ceremony Being Filmed? The Location Is So Different
By Umber Bhatti
Stay up to date