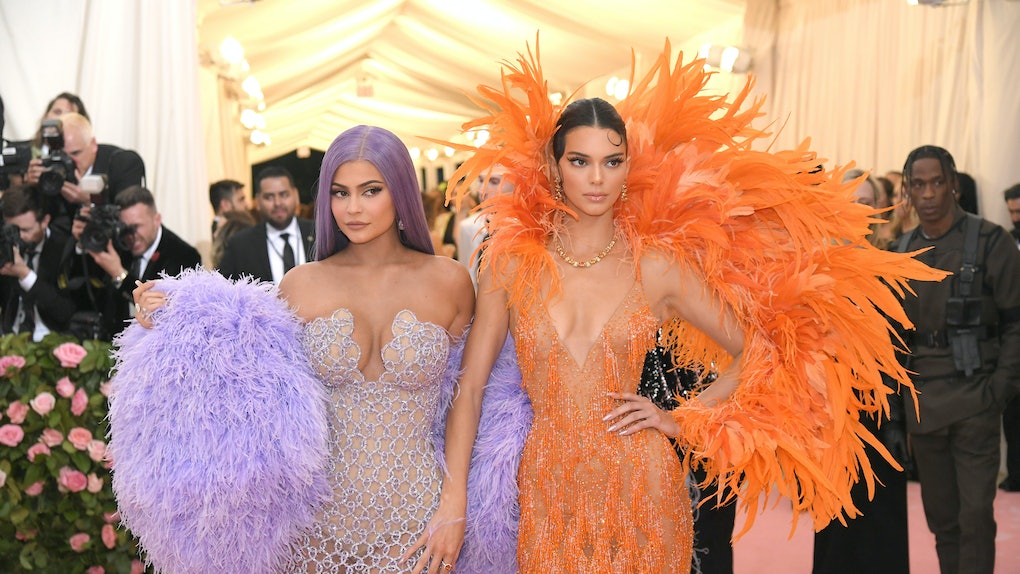 If you haven't seen Kylie Jenner's "A Day In The Life" vlog just yet, you're depriving yourself of 20 minutes of high-quality, Jenner-packed content. The video shoes an inside look at Kylie caring for baby Stormi, calling boo Travis Scott, partying with friends, and of course, attending photoshoots and meetings for her two beauty brands, Kylie Cosmetics and Kylie Skin. Early on in the vlog, Jenner meets up with her sis to discuss some products coming soon, and now everyone is asking the same exact question — when does the Kendall x Kylie Cosmetics collab drop? The duo didn't spill all the deets just yet, but read on for everything we know so far about the long-awaited collab.

Even though Kendall and Kylie have teamed up together on books, accessories, clothing, et cetera, Kendall has never collaborated with Kylie when it comes to beauty. Despite the fact that each of the other sisters has done so (Khloé and Kim have each had two collections, in fact!), Kendall never got the chance, most likely due to the fact that she was at one point the face of Estée Lauder's short-lived millennial brand, Estée Edit, and couldn't be the face of a competing brand like Kylie Cosmetics. That's all over and done now, though, and fans were delighted to see Kendall and Kylie in a meeting discussing their future collab.

"What is this" Kendall asks in a monotone voice as her sister approaches her, vlog camera in hand rolling:

She then uses the camera as a mirror to zhuzh her hair, which is funny:

From there, the two went into their Kylie Cosmetics meeting. "I really don't know exactly what we're doing today," Kendall declares. "But we have a collab coming," Kylie insists, to which Kendall responds, "Okay, well yeah. We have a collab coming, but..." She then gets mad at Kylie for showing up in full makeup without warning her to get glam herself, and I'm reminded I should probably go fight with my sister about something, too.

Such is the nature of sisterhood, people! I'm glad they kept the bickering in the video:

Anyway, let's jump to the important part, aka the discussions regarding their collab:

Once seated at their meeting, another employee tells the duo they'll be choosing the color palette for the components and the deco for the collab today. Exciting stuff! Viewers don't get to see much, but based off of their questions and comments, a rough idea of what the products will look like can be pieced together using the ~imagination~.

"What about cream?" Kylie asks Kendall:

Neither sister seems sure:

At one point, Kylie asks to see "Kendall" written in gold on a particular component, and Kendall requests to see it in black, too. At this particular moment, Kendall is using either a contour or bronzing stick on her forehead, but I can't figure out if it's part of the drop or if she's just getting ready for the day with her own supply of makeup, since she yelled at Kylie earlier for coming in full glam. Maybe it's a cream contour stick, and that's the "cream" Kylie mentioned earlier? Perhaps it had nothing to do with the color palette at all!

I would love a Kendall x Kylie bronzer, personally:

After that, Kendall's portion of the meeting is over and she leaves. It's not until this moment that I notice her "69" phone case. Maybe I do think Kendall is funny:

So there you have it folks — a collab is coming! Possibly a cream, gold, and black collab, possibly with a bronzing or contour stick, but at this point, not much is confirmed. If you're as curious as I am, be sure to follow Kylie Cosmetics on Instagram in hopes that the duo spills the deets sometimes soon.