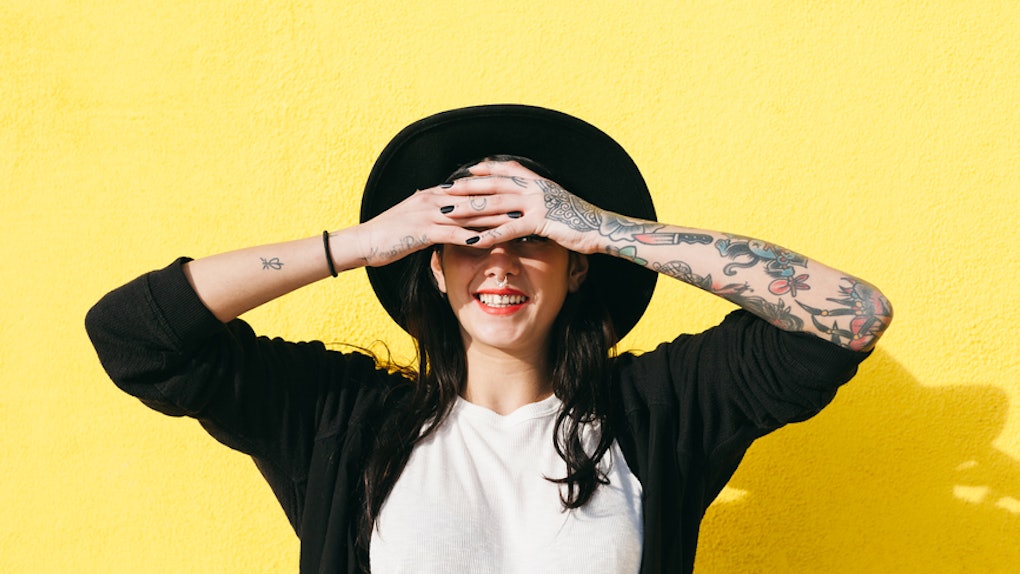 When Dates Google Me, Things Get Awkward... Because I Write About Dating For A Living

"Promise me one thing?" My latest dating app match texted, just after we'd made plans to grab drinks the next week. "Don't write a story on Elite Daily about me. Or at least, keep it anonymous if you do." And while I kind of expected this to happen if and when dates Google me, I definitely didn't expect what came next...

Let's rewind for a second.

First off: Sorry, bro, I'm writing a story about you (anonymously, as you wished!). Second, as this article might indicate, I write about dating for a living. So, a cursory Google search of my name yields articles about jetting off on travel dates with strangers, sexting, and that one time I used Tinder to get a hot guy to bring me pizza during a snow storm. Not, like, a quote I gave my college newspaper about how I can't wait for my sorority's chili cook-off (though I'm sure that's out there, too).

Consequently, the guys I go out with often roll up to our first date knowing more about my romantic history than my own grandmother (whose online savvy is limited to posting "Happy Birthday, Genevieve. Love, Grandma" as her Facebook status; thank goodness).

Is it weird? Absolutely. But, as anyone who's read my stories will know, I'm a pretty open book — an open book who sometimes asks strangers for presents on Tinder — so it doesn't hurt for guys to have that head's up before meeting me and my crazy eyes. Or so I thought.

I didn't anticipate that learning I'm a dating writer would give guys the proverbial balls to lay out their personal dating dilemmas — 15 minutes into our first meeting — for my "professional advice."

But alas. That's exactly what it did.

Which brings us to my first date with Mark*, the fellow who'd texted me a few weeks back asking that I do, well, the opposite of this. (For the record, I never agreed...)

Full disclosure: I wasn't all that jazzed about my date with Mark — my week had been hectic and I had a two-for-one pizza coupon that was about to expire. But he seemed nice and invited me to a specialty cocktail bar, so I figured I'd bite the bullet, wash my hair for the first time in five days, and meet him on a Friday night.

Mark turned out to look a smidge like Eddie Redmayne and had a very charming British accent, so I felt pretty good about my decision to go out. Until he started talking.

"Have you ever had sex on a plane?" he asked, maybe five minutes into our date. I nearly spit out my drink.

"Have I... What?!" I asked, with mild horror, before remembering that a story I'd written about the mile-high club had run earlier that day. (For the sake of any future dates who Google me, no, I'm not a member.) "Oh, nope. No. But wow, you've really been doing your research, huh."

This was just the beginning. The rest of the evening was spent listening to his various dating trials and tribulations, answering questions about what constituted "a fling" versus "a relationship," and helping him arrive at the eventual conclusion that yeah, he was still hung up on that girl he'd slept with last month.

Virtually every question was book-ended with, "I wouldn't ask this if you weren't a dating writer, but..." (Pro tip, gents: This is akin to saying "No offense!" before making an undeniably offensive statement. It doesn't really negate the fact that you're about to ask a really effing weird question.)

And it's not even a rarity.

In the four-ish months that I've been writing about dating, at least three different guys I've gone out with have either googled my name and made wild assumptions ("So, do you have to test out all of those sex moves yourself?") or asked me to offer advice on their dates with other women ("In your professional opinion, how long should I have waited before going home with her?"). That's not including the dating app matches who ask me to review their profiles, of which there have been many.

Don't get me wrong: I'm all about openness, honesty, and talking through the madness of modern dating. But I'm also all about going on dates that feel like dates, not wildly inappropriate therapy sessions. And I couldn't help but wonder — did Carrie Bradshaw ever have to deal with this? I think not.

I mean, if you went out with a doctor, you wouldn't ask her to check out that weird mole on your back, right? So maybe don't ask a dating writer if she's done it in an airplane bathroom.