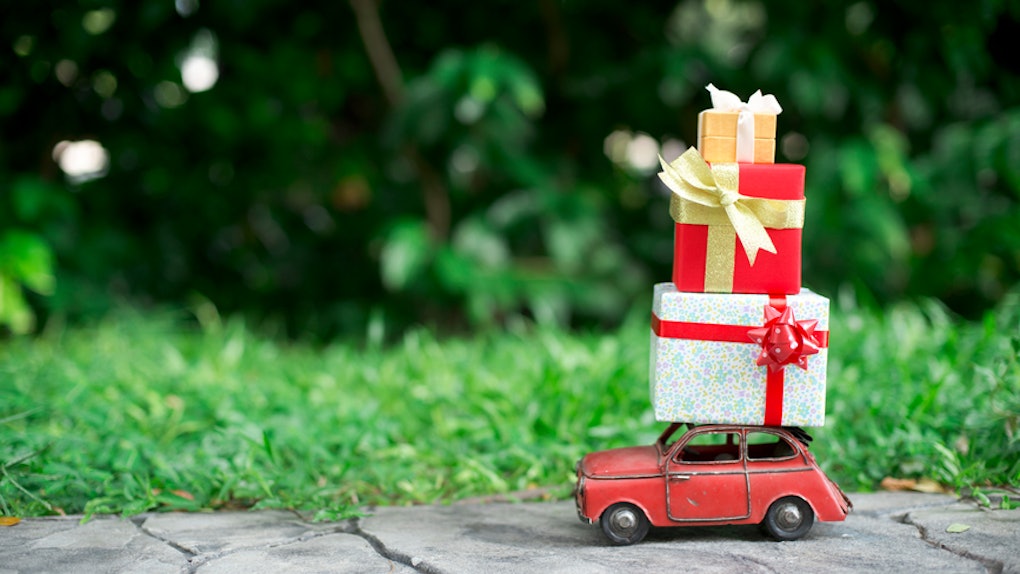 I Sent My Amazon Wish List To Random Guys On Dating Apps & Like, Where Are All My Santas At?

This past weekend, with a terrible cold and several inches of snow outside my window, I decided to do what any cooped up and self-respecting young woman would: I sent my Amazon wish list to guys (read: strangers) on dating apps. And, unsurprisingly, things got weird.

I was asked if this sat well with my conscience, told that dating apps were not the place for such propositions, and accused of using my sexuality to manipulate men (ah, if only we had a dollar for every man who played that ridiculous card — am I right, ladies?). One gentleman actually came through and sent me a book. Oh, and then there was the guy who sent me a matching pajama set, tried to video call me five times on WhatsApp, and promptly cancelled his order when I did not respond. It was a roller coaster of mixed signals and allegations.

But let's start at the top.

Historically speaking, I actually have a bit of a complex when it comes to accepting gifts (or anything) from men. In high school, my boyfriend used to use my debit card to pay for our meals. The next fellow I dated asked if we could open a joint PayPal account so I could deposit funds, but he'd always look like he was paying (we broke up before this ever became a thing). Covering my partner's costs just seemed to be the expectation, and when I started dating more casually, that policy shifted to always, always, always going Dutch.

Needless to say, the thought of asking guys I'd never met for gifts felt both foreign and exhilarating.

And so, I created an Amazon Wish List that reflected the kinds of presents one might buy for their girlfriend — perfumes, fresh orchids, an array of feminist literature (I'm interested in dating #FeministsOnly) — and basically switched my settings to be limitless. Maximum distance: 100 miles. Age range: 23 to 55. No man was too far, nor too old, to send me gifts this year. After all, Santa is like a million and lives all the way in the North Pole. I even threw the link to my wish list with the simple question "Buy me things?" into my bio, just so these guys would know exactly what they were getting into when they swiped right.

Turns out, they didn't quite know what they were getting into... And neither did I.

First up was Nadeem, whose bio indicated that he worked as a CEO in the fashion industry. Surely, he would gift me that Jo Malone set I'd asked for, right?

Apparently not. As it turns out, Nadeem thinks it's "inappropriate to ask strangers for Christmas gifts."

Of course, I questioned the validity of that statement by asking if he'd ever met Santa (shout out to my roommate for her quick thinking there!), but I guess Nadeem's got a personal relationship with the big guy. Maybe he's responsible for designing that red suit? IDK. Whatever, Nadeem...

Like Keanu Reeves, Jae was ageless, and his anthem was "Finer Things" by Jon B. and Nas. So I was hopeful that he'd be down to send a few finer things my way. But alas, Jae explained to me that dating apps were not the right place for this (not unless I was willing to "spread my legs," that is). Such charm, such chivalry!

Josh got a little salty after I sent my wish list his way.

I think it's really unfair to say that I was using my sexuality. We've all been conditioned to believe that women asking for anything means they're manipulating men with sex, which is untrue and a perception that definitely needs to change. (And for the record, the most suggestive item on that list was a pair of silky pajamas.)

That said, I think Josh was just looking to meet and chat with some nice people, and I did straight-up ask him to send me presents... So, apologies on that front, Josh.

I'd tried to shift gears and set this one up as low key and research-related, to see if that might convince Cris to click "buy." It did not.

I think what he was trying to say is, "There is no way I'm going to spend money on a woman who I met a couple of minutes ago ONLINE."

Fine, Cris. But there's no way I'm going to let people call me "darling" before they've sent me gifts through the internet. Checkmate.

By this point in the experiment, several men had started cursing and aggressively un-matched me, so my patience was wearing thin. Enter Alex. He built me up (buttercup!) just to let me down...

...so I decided to go off-script and broke the fourth wall. I explained to Alex that this was for an article, and I could write him as a semi-anonymous hero if he came through. And it worked.

Alex sent me a copy of Chimamanda Ngozi Adichie's We Should All Be Feminists, which should be arriving in three to five business days.

So like, thank you, Alex. You're still a hero. And my roommate and I still approve.

Jason was also ageless, and apparently concerned about paper trails connected to Amazon Wish Lists — both of which should have been red flags (OK, I knew they were red flags... but like, presents!).

What I should have said was "Nothing. The guys get nothing." But I wanted to seem cool and mysterious to see how this all played out... So, I gave Jason my WhatsApp number (FYI, you can block WhatsApp contacts super easily!) and he quickly informed me that the pajama set I had picked out was on its way. Then he video called me five times in a row. And when I didn't answer and blocked his number, I noticed that the PJs he'd purchased quickly slipped back into the "Unpurchased" portion of my list. Fair enough.

Now, as mentioned, a lot of fellows quickly unmatched me after I shared my wish list, or sent replies that I can't exactly publish here, so I'll leave those conversations to your imagination. What I can tell you is that the people I was sure would play along did so with strings attached, and the ones I thought might be amused got pretty offended.

Like, the 50-year-old men whose profiles showed them zipping around in sports cars made it clear that they would happily send gifts if I sent explicit imagery in exchange. And the guys closer to my age usually thought I was a bot, a prostitute, or just unworthy of their time (which they often made clear with some colorful language before hitting "Unmatch"). What's even crazier to me is that half of the items on my list cost less than a pint of beer, and yet, the mere act of asking was enough to send these men into a tailspin.

So, would I recommend sending your Amazon Wish List to people on dating apps? Probably not. Stick to asking good 'ole Saint Nick. Unlike a lot of the guys I talked to, I'm sure you made the nice list this year.