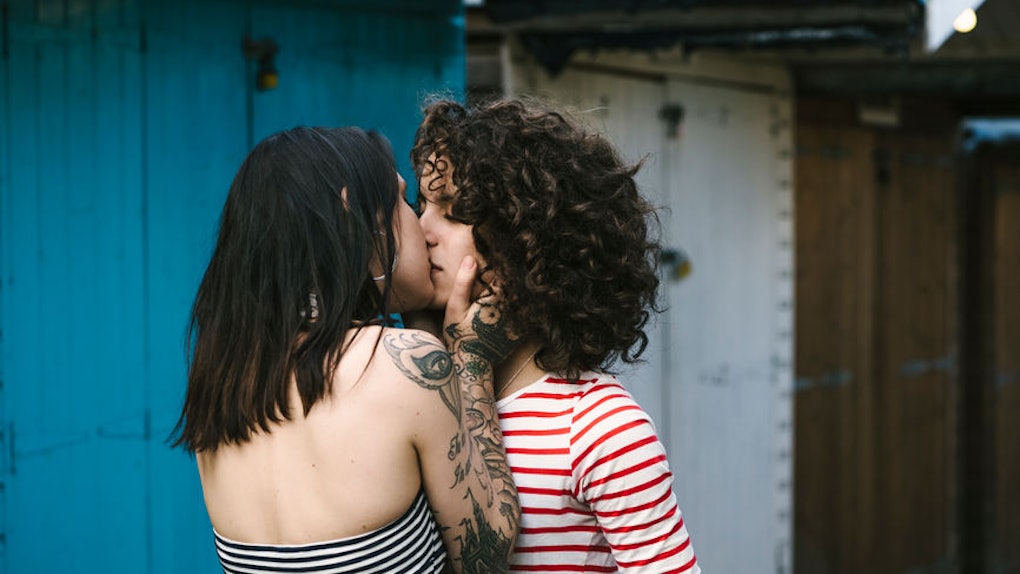 In the movie 500 Days Of Summer, Tom (played by Joseph Gordon-Levitt) dances in Central Park to "You Make My Dreams" by Hall & Oates, right after hitting it off with his work crush, Summer (played by Zooey Deschanel). By the end of the song, everyone in the park has joined in on the synchronized dance. I now realize that the likely culprit behind Tom's sunny jaunt in the park was New Relationship Energy (NRE), the phrase psychologists have given the cocktail of brain chemicals that your brain releases at the start of a new relationship. Put plainly, NRE can have you feeling like Tom in that very scene: like all of your dreams are coming true.

"NRE is one of life's most exciting feelings," says Dr. Laurel Steinberg, Ph.D., licensed psychotherapist and adjunct professor of psychology at Columbia University. "It's that very alive and upbeat feeling so many of us experience at the beginning of a relationship when we realize that someone special knows that we are alive and thinks we are great." NRE may explain why you may feel such a rush to the head every time you develop a crush, as well as why you may also feel absolutely terrible when a fling doesn't end up working out.

If a new relationship ends really early, you may beat yourself up about feeling sad, since you technically didn't "date for that long." But the truth is, whenever the NRE floodgates open, they can feel incredibly difficult to close. Dr. Steinburg explains that New Relationship Energy is particularly disarming because it's such a specific feeling that only comes from experiencing extreme passion or excitement, like at the start of a new relationship.

Personally, I've experienced New Relationship Energy time and time again without realizing what it was. For years, I felt really embarrassed about a "situationship" with a woman who shattered my heart. We didn't date exclusively or officially, but during the two months that we saw each other, I experienced an absolute exhilaration in a way that I hadn't before. When she ended it, I felt incredibly hurt, but I also felt ashamed for being so devastated when we were never really "a thing."

According to Dr. Steinburg, my mental state could have partly be credited to NRE, because my brain had released so much dopamine, serotonin, and endorphins early on in the 'relationship' that had made made feel incredible. However, when she suddenly ended things one night, all of those hormones were immediately cut off as a result of the rejection. Dr. Steinburg explains that going from one extreme to another so quickly may be the reason I was so crestfallen when it suddenly didn't work out. While plenty of breakups after long-term relationships have also devastated me, the fallout hadn't occurred during my NRE phase. Thus, while they did feel painful I didn't experience extreme emotional whiplash.

"A new relationship represents the possibility for a huge change in your life," she says. "It's so exciting to begin a new 'life' with someone and to get to know each other over time as you building something beautiful." She also explains that it's human nature to value and cherish relationships, which is why NRE can unlock such a bounty of brain chemicals. "Our thoughts about what's happening stimulate the creation of dopamine, serotonin, and endorphins in the brain," says Dr. Steinburg.

While feeling really good at the start of a new relationship isn't revolutionary, being able to put a name to an experience can be useful and validating. For instance, if you feel like you've been soaring higher than usual and it's making you anxious, perhaps NRE is to blame. In this case, Dr. Steinburg shares that there are a few things that you can do to take your mind off these heightened feelings. Hanging out with friends, taking up a craft, or trying an exercise class that is just for you, could help to keep your mind focused elsewhere.

Feeling so potently about something can be scary because of the innate vulnerability that comes with embracing your emotions. But I liken it to running downhill super fast and feeling like you might fall if you try to stop — the only thing you can do is to keep going. Dr. Steinburg assures that it's valid to feel such a strong surge of emotion. Practicing centering and mindfulness techniques, like taking deep breaths and assuring yourself that you are "in like," even though it may feels like your heart might explode, can keep your brain in check until you're sure that you've fully fallen in love.

Being at the precipice of a new relationship can come with a lot of excitement. So, if you need to lean into that inner urge to dance and sing about your new crush in the middle of Central Park, have at it! If the sunniness of this new relationship dims tomorrow, try not to sound the tornado alarms just yet. NRE can make you feel like you're simultaneously super elated and totally fragile. Remember: Your new emotions are valid, and the world will not collapse if this crush changes shape or goes in a different direction. At the end of the day, NRE can be a wonderful experience to indulge in and celebrate, as long as you recognize that its strong emotional impact is temporary.