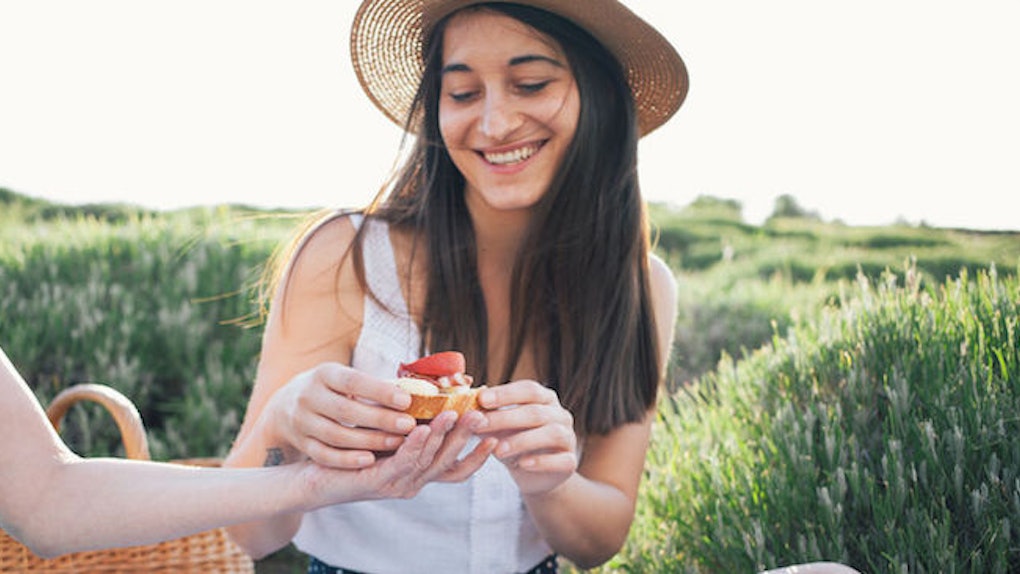 5 Easy Ways To Practice Mindfulness In Your Everyday Routine, According To Experts

When you think of mindfulness, I'm willing to bet some of the images that immediately pop into your mind include yoga mats, people humming "om," and weird, transcendental music. And yeah, practicing mindfulness can include all of those things, but it can also be way less complicated than all of that. Mindfulness doesn't have to entail hour-long meditation sessions or ancient mantras that you say aloud over and over again. There are plenty of easy ways to practice mindfulness in your everyday life, because the thing is, you can be mindful at any time, anywhere — no yoga mats or spiritual guides required.

According to Lisa Sussman, LMHC, clinical director at The Palm Beach Institute, a Delphi Behavioral Health Group, mindfulness is the practice of being fully aware and grounded in the present moment, while taking into account your feelings and thoughts without judging them. Being ~in the moment~ without judgment is a skill that requires ongoing, repetitive practice, Sussman tells Elite Daily over email, but to some people, it can seem like a ridiculous amount of work that they aren't exactly willing, or even able, to take on.

Pax Tandon, a mindfulness expert and author of the book Mindfulness Matters: A Guide to Mastering Your Life, says mindfulness can sometimes be challenging for beginners because they've never actually stopped to be in the moment before. It's pretty likely that your mind is constantly running or craving stimulation of some kind, she says — you've just never realized that that's how your brain works most of the time. "But we're human beings, not human doings," Tandon tells Elite Daily over email. "We need to learn to slow down and just be present to the miracle of being alive."

The good news is, mindfulness can easily be integrated into your routine because so many of the daily tasks you might take for granted — eating, walking, listening to music — are all primed for more mindfulness. But it's up to you to challenge your mindset and truly place yourself in the present moment as you're doing these things.

According to Tandon, walking mindfully simply means concentrating your attention fully on the act of walking — so yes, scrolling through Twitter while you walk doesn't count. "This is best done in a contained space, like a garden, where you can walk about 10 feet in one direction, turn around, and walk back again," Tandon tells Elite Daily.

Walking mindfully, she says, will allow you to move the focus away from where you're going directionally, and shift it toward the act of walking itself. "Try placing your attention on each element of your stride — from when you step forward and feel your leg muscles activate, to when your heel hits the ground, to the forward action of your foot as it lowers to the ground," Tandon explains. She recommends tuning into specific sensations here, like the feeling you get as the ball of your foot makes contact with the ground, "the counterposed action of your toes first relaxing onto the ground, and then the pressure as you push off of them."

Write Down Your Feelings In A Diary

It's far too easy to discount your feelings, bury your emotions, and push your thoughts aside when they're, you know, not exactly the way you want them to be, or when they're simply inconvenient to deal with in the moment. However, if you're trying to be more mindful of how you feel in the present moment, Sussman recommends writing your feelings down somewhere so you can track them over a period of time and look for patterns.

Try not to go into this exercise with any expectations, Sussman tells Elite Daily. Simply observe, day after day, without judgment, your candid emotions, and write them down as they come to you.

Eat Mindfully During Your Next Meal

According to Tandon, the simple act of not scarfing down your food while answering emails on your "lunch break" is an example of mindfulness — wild, right?

"At your next meal, slow way down with the process of imbibing your food," she tells Elite Daily. "Allow each of your senses to savor the meal, not just your taste buds."

First, Tandon suggests, just take in your meal by sight: Observe the variety of textures and colors on the plate. Then, she continues, take it in by smell: Take a big whiff and enjoy the stimulation. "Then, as you raise your first fork- or spoon-full to your mouth, notice if the glands in your mouth actually salivate in preparation," she says. "Once the food reaches your mouth, really take note of temperature and texture. Chew each bite slowly, and mindfully."

Use The STOP Technique

Sussman tells Elite Daily that a big part of mindfulness involves the development of "distress tolerance skills," which basically just means finding and working on strategies that help you cope with uncomfortable situations, whether it's a messy breakup or a salary negotiation with your boss. One of Sussman's personal favorite strategies is the STOP technique. "The STOP technique would require stopping, taking a step back, observing one's feelings, and proceeding mindfully," she tells Elite Daily.

Sounds easy enough, right? Try it out the next time you're about to impulsively say something snappy to a co-worker or text something irrational to your SO.

Listen To Your Favorite Playlist

Another simple way to practice mindfulness, Sussman says, is to use self-soothing and distraction techniques such as taking a bath, reading a book, or even listening to music.

Putting on your favorite playlist and doing nothing else but listening to the music is an incredible mindfulness technique, Sussman tells Elite Daily, because usually, you're probably multitasking when you pop in earbuds and listen to your favorite tunes. But when you focus on the rhythm, the beat, the lyrics, the singer's vocals, and nothing else, believe it or not, you're practicing mindfulness.