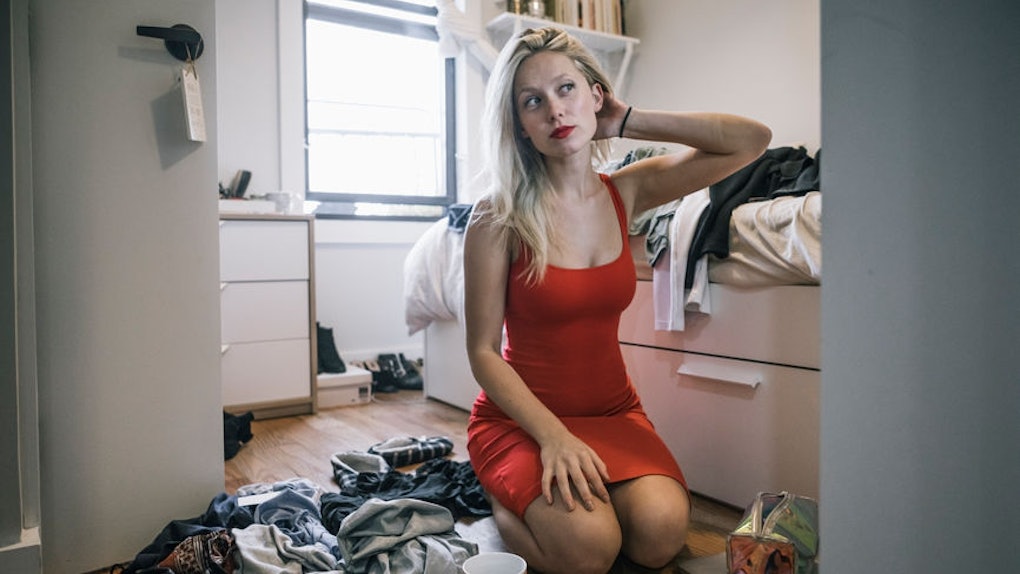 Picture this: You wake up to a bunch of dishes in the sink, and you can’t find the remote because it’s buried under a pile of clothes on the couch (are those even clean or what?). You know your SO is to blame for all the mess, and TBH, you’ve just about had it. As for what to do if your partner is too messy — it's important to loop them in on your frustrations and give them the opportunity to do something about it.

Among the many differences that two partners can have, messiness and tidiness are perhaps one of the most glaringly obvious, particularly when you share digs. Whether you live with your boo or you just happen to be at each other’s abodes on a regular basis, however, it’s an issue that’s not only worth addressing — but also totally possible to resolve.

According to relationship and etiquette expert April Masini, it’s totally natural to feel irritated by a significant other’s messy ways.

“This can feel as if there is a lack of respect going on,” she tells Elite Daily. “They just don’t invest their own time and energy into tidying up.”

However, your boo may be totally clueless as to how their habits are having a negative impact on you. So it’s crucial to bring the issue to their attention.

Masini advises discussing your frustration with your partner directly. Most importantly, she recommends bringing it up ASAP — before you get too resentful or angry about it.

“It’s important to focus on the problem and not on your emotions — if you’re so steamed, you can’t see straight, and you’re not going to be a great communicator,” she explains. “Dropping hints tends to become passive aggressive, and that’s why I like the idea of approaching the issue head-on.”

Also, you’ll want to be mindful of your tone — avoid any judgmental remarks. After all, you and your significant other may have contrasting tendencies, but that’s OK. And the last thing you want to do is put them down.

“Don’t denigrate someone for being different than you,” says Masini. “Instead, talk about how you really like a neat and tidy home, and you’re looking to your partner for some help in that regard so you’re comfortable. Likewise, don’t denigrate yourself for being neat and today — and don’t let your partner do that either. You’re different. Let that be.”

Once you’ve brought it to bae’s attention that neatness is important to you, it’s time to come up with a game plan. Telling your partner that you value tidiness may be too vague — but if you can offer up some specific strategies or actionable goals, your boo is more likely to do their part.

“Don’t just point fingers or talk about the problem,” adds Masini. “Offer some solutions, whether it’s a chore wheel, a housekeeper, boundaries on who uses which bathroom, or divvying up cleaning responsibilities.”

In an ideal world, this discussion will go smoothly AF, your SO will step up to the plate, and you’ll both be happily washing dishes together in no time. Who knows? It may be something that’s been on their mind, too.

“You may be surprised to learn that your partner is just as upset as you are with his or her own messy behavior,” explains Masini.

But of course, there’s a chance that there’s a little pushback. After all, your boo may have had these habits since childhood, which means they’re going to take a little time and effort to break.

“If you’re with someone who is chronically messy and derives creative juice from living in chaos, their lifestyle may be integral to their identity,” says Masini. “If this is the case, stop trying to change the other person and focus on yourself. Consider changes you can make that don’t require a partner to participate. For instance, you could live separately and get together at one or both of your places, or a hotel room. You could hire a housekeeper or maid service.”

In other words, all hope is not lost if you’re in a relationship with someone who’s messy at heart. Try bringing the issue to their attention in a calm, non-accusatory way while offering up some different steps they can take to help resolve it with you. If your SO knows how much their habits are frustrating you, they’ll hopefully be willing to work on changing their sloppy ways.