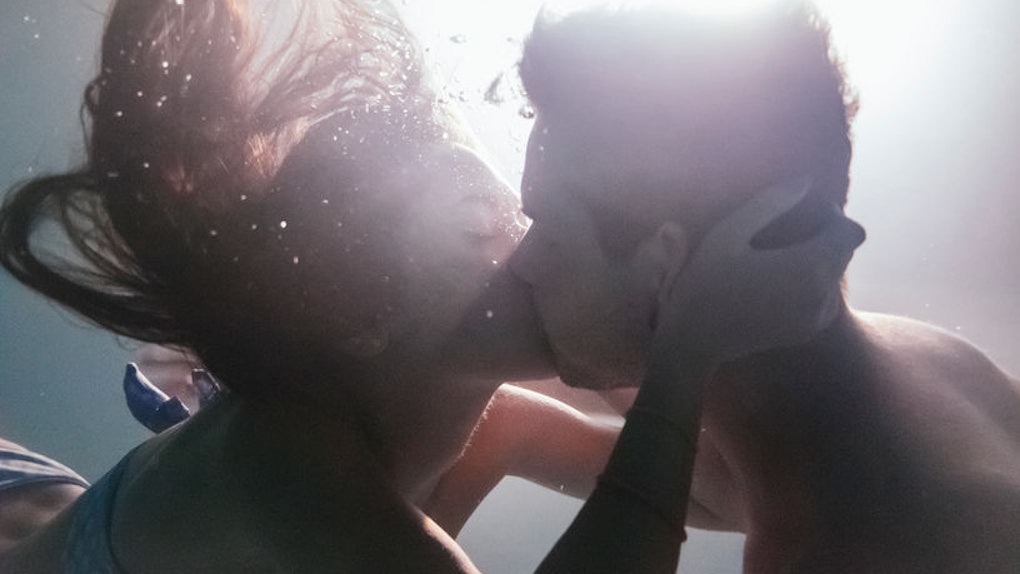 Is there anything sexier than a full moon? Surprisingly, there is, and it's called a lunar eclipse, which is exactly what will infuse the night sky with blood-red hues on July 27, 2018. The fact that a lunar eclipse is breathtaking in its beauty alone should be enough to send your mind wandering. When I tell you that a blood moon is essentially the energy of a full moon amplified with infinite power, you'll know that something major is bound to happen on this night. If you're feeling way more passionate than usual, then what the full moon in Aquarius 2018 will do to your sex drive will have you biting your lower lip in no time.

Think of it this way: When a new moon takes place, it wipes your slate clean and plants a fresh intention like a seed. By the time the new moon grows ripe and bright into a full moon, that intention is ready for harvest. All the thoughts, feelings, and desires you've been having are intensified, so that you may reap the benefits of all the internal and external work you've done. Your secret self is brought to the forefront, bearing reward and revelations. And let's be honest here: Is there anything more rewarding than mind-blowing sex? On the upcoming blood moon, it could be all you're thinking about.

In mythology, werewolves transform into their true form on the full moon, howling with wild fury at the night sky. The same thing essentially happens to us, except instead of the full moon, we're howling at the object of our desire.

The full moon makes us hungrier for more. It drags all our lust, passion, intensity, and emotion to the forefront. When your deep-seated needs come knocking at the door, it's not unthinkable for it to result in sexual desire burning through your body. While raw emotion is often a mess we like to keep secret, colliding and conflicting with our surroundings if set free, it definitely makes things sexier when it bulldozes through all the pleasantries. In fact, how often has an argument resulted in some of the best sex of your life? It's when things are really heated that your instincts are activated. On a blood moon, there will be no cage to contain your animal self.

Complications And Disagreements In The Sheets

However, just because you feel like tearing apart the sheets doesn't mean the sex will go as planned. When this full moon forms a conjunction with Mars, things may become a bit too intense, and there is such a thing as too much of a good thing. When two planets form a conjunction, it means that they're both in the same zodiac sign, which allows their energies to combine and overflow. Mars is the planet of sex, wildness, aggression, and intensity. While you'd think that this conjunction would just make the sex incredible beyond belief, I'm sorry to report that there happens to be one major problem: Mars is in retrograde.

Since Mars retrograde is known for suffocating libidos and cooling the heat, it could make this blood moon an evening of highs and lows; of unpredictable reactions and shifting feelings. Try not to get your hopes up too high, because there is a chance everything will crash and burn.

A Change In Your Desire And Sexual Expression

While Mars retrograde adds an unpredictable twist to the sexual energy of the upcoming blood moon, it doesn't guarantee that things will go awry. However, since blood moons are known for bringing swift change to our lives, there's a huge chance that you'll want something different in bed. Perhaps you'll find yourself attracted to someone you never considered before. Maybe you'll want to try something even kinkier and outside your comfort zone with your partner. Whatever sexual changes you're feeling, trust that they're ultimately bringing you closer to your rawest self.

The sign of Aquarius is known for individualism, eccentricities, and everything strange and off the wall. When both Mars and the moon are in this sign, you can expect the sex to be, above all things, unique.