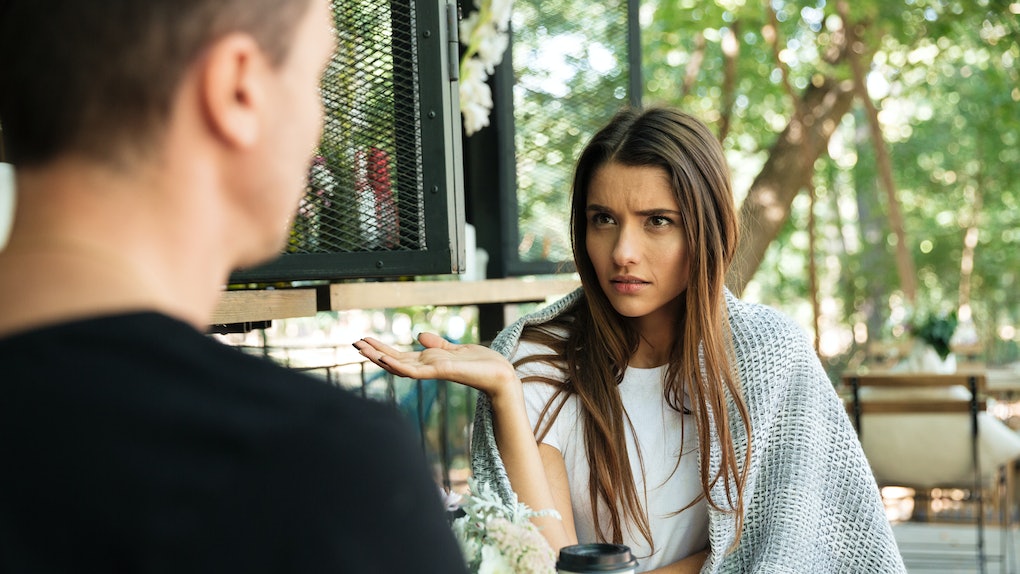 What Does It Mean To Bicker Like A Married Couple? Experts Say It's Not Necessarily A Bad Thing

“You guys bicker like an old married couple.” It doesn’t exactly sound like a compliment, TBH — but it’s definitely a common observation. And if someone has used this phrase to describe you and bae, you may have wondered about the implications of the expression. So, what does it mean to bicker like a married couple? And is it a good thing, or a bad thing?

First of all, let’s clarify the distinction between bickering and full-on fighting. According to the Cambridge Dictionary, the definition of bickering is to “argue about unimportant matters.” Whereas a fight might revolve around something that actually bears significance in your relationship (and tends to be more heated in nature), bickering is generally reserved for the trivial day-to-day stuff. As such, it rarely escalates and passes quickly. Maria Sullivan, dating expert and VP of Dating.com, notes that if you’re squabbling over who’s turn it is to take out the trash or do the dishes, that’s an example of bickering.

And there’s a reason why bickering “like a married couple” is a specific expression. Think of it this way: Married couples spend a lot of time around each other. So, it’s only natural that they occasionally, they’ll annoy the crap out of each other (hence, the bickering over silly stuff).

Not only that, but spending all that time around each other means they typically reach a comfort level with each other that non-married couples might not have. As such, they may feel more comfortable bantering and teasing and nitpicking while knowing that it probably won’t turn into a real fight. Bickering is almost like a dance — rarely are these comments or jabs hurtful in nature, and in fact, they may have a certain predictability about them.

Some may perceive bickering to be a bad thing — after all, it’s associated with conflict. But in actuality, it can have a positive connotation.

“Bickering like an old married couple can be a good thing if you and your significant other can laugh about it moments after and you move on rather quickly,” explains Sullivan. “The only time you could be concerned about it is if it results in insulting one another. It should also be a concern if you don’t come to a resolution fast and have it ruin your mood for the day.”

What a relief, right? But that’s not to say that all bickering is healthy. Gregory Kushnick, a licensed New York psychologist, previously told Elite Daily that as long as you respect each other’s differences and avoid keeping score, there’s nothing wrong with a little bickering — in fact, he says it’s inevitable in any relationship. But according to Dr. Gary Brown, a prominent relationship therapist in Los Angeles, if the tone or frequency of your bickering changes dramatically, then it’s worth bringing it up with your partner. He previously told Elite Daily that if you suddenly find that you’re bickering constantly, it’s best to address that ASAP to prevent it from spiraling into a more serious situation.

So, to recap: Bickering only signals a larger problem if it’s suddenly happening a lot more often, isn’t resolved quickly, and/or results in hurt feelings. As for bickering like a married couple, it’s not necessarily a bad thing. In fact, it suggests that the two people not only feel comfortable with each other but also that they are willing to face their differences. Because if you can have a tiff over the meaning of some Post Malone lyrics or where to grab takeout tonight and then quickly move on like nothing happened, then you probably feel pretty darn secure in your relationship.

More like this
18 Celebrity Couples Who Got Married In Secret
By Corinne Sullivan
This Couple Met On BLK & Shares A Deep, Spiritual Connection
By Veronica Lopez and Hannah Orenstein
When Are Ariana Grande & Dalton Gomez Getting Married? Here's The Reported Tea
By Corinne Sullivan
Stay up to date