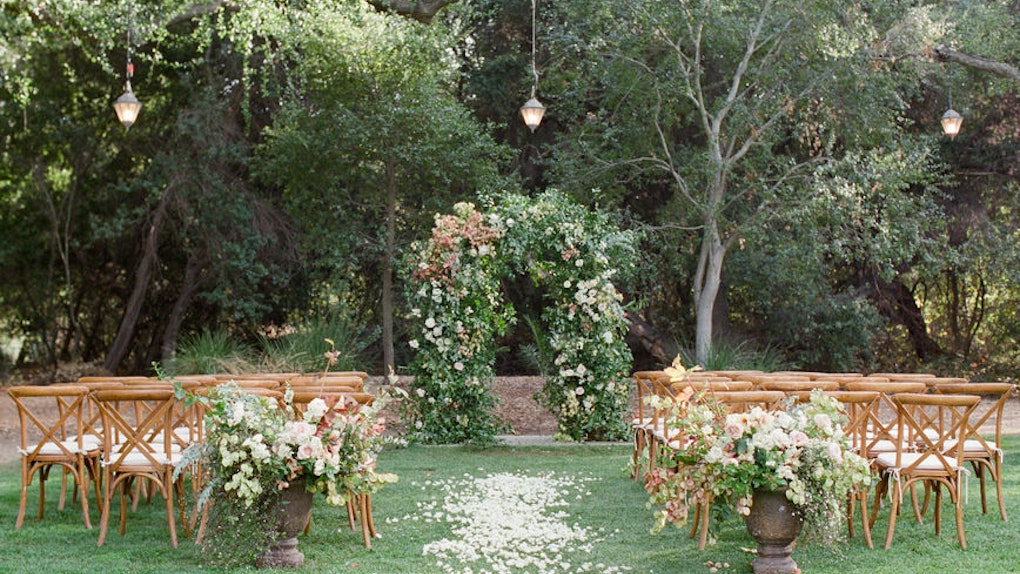 As the temperatures outside being to rise, flowers start to bloom, and the snow melts away, the greatest time of the year is upon us: It's wedding season, y'all! A time of year that's filled with gorgeous floral arrangements, bad DJs, and all the cake you can dream of. It's a wonderful time, but for those in the wedding industry, it can also be v stressful, especially when working with couples who are — how can I put this — demanding. OK, that's harsh, but hearing about these wedding planners' most challenging requests from couples might just have you gasping out loud.

Let me be clear: When it's your wedding day, you should be able to celebrate on your own terms. But there's something to be said about following your heart, while still remaining respectful of those who work so hard to make your special dream a reality. From getting upset at pregnant bridesmaids, to making outrageous demands from guests, there are some lines are difficult to uncross. .

I asked a few wedding planners about the most outlandish, cringe-worthy request they've ever gotten, and trust me, their responses were absolutely jaw-dropping. These wedding planners have seen it all.

My most cringeworthy request from a couple occurred a few years ago. I had a couple who requested a stripper pole to be installed at the reception venue. I initially thought that it was a joke, but as we neared their date it became obvious that they were serious! The bride had a routine she wanted to perform for her new husband and felt that some guests would enjoy as well.

2. Maybe the dead animals would have actually been better?

A few years ago, my couple picked a Nature Center in their town for their wedding reception. They loved that it was an educational center but at the same time the bride wanted all of the animals covered up that had been taxidermy. The issue was that many of the large scale displays were in the main room, in glass containers that could not be moved. At first she wanted them all covered with a different mix of fabrics, and we were able to get her to just use white clothes to cover them. While it wasn't a look that we loved, we did our best to set up other items in front of the covered displays to take away from the fact that 88% of the room was now had white sheets over glass display boxes. We set up a photobooth in front of one, we moved the DJ in front of some as well, cake and so forth. It was the best thing to do considering the situation we were in.

I've had a bride ask us to ask the best man to leave a wedding. It was our understanding that the bride and best man never got along and the bride had learned the day of the wedding about the bachelor party that had taken place months earlier. She was demanding that he and his parents would be asked to leave. It was a very difficult thing to have to deal with and we did have to address this with the best man, and the groom. After a lot of time spent talking to the bride, assuring her that the day was about her and her groom and that while we understood why she was upset, asking him and his parents to leave before the ceremony would cause more questions and take the focus away from the ceremony.

For the ceremony, we ended up having the wedding party sit down in the first row instead of stand up at the alter, we gave the rings to the Priest, and we politely moved his seat during the reception to a different part of the room and he and the maid of honor did their speech together. It could have all gone very south very quickly but thankfully we had a great Best Man and very understanding one. As an experienced wedding planner, I've learned over the years that sometimes addressing the issue in such a grand fashion can be more destructive once everyone is already there ready to go.

Probably the biggest challenge was finding out the day before the event, the venue sustained a major pipe leak, which resulted in a facility that could not be used to accommodate the reception. To this end, the day before the event, our entire team called every venue possible that could accommodate this event to see if space was available. We were also looking at options within the same general area — at least within a five-mile radius as not to cause any major inconveniences for the guests.

One other problem is the client had already contracted food and beverage service through a caterer and it's obvious that a restaurant and many country clubs provide their own food and beverage operation. Everybody on our team made tons of calls, including the caterer — to find another facility. We did! The logistics were completely changed for the reception and re-worked a lot of the decor to fit within the new space. Guests were notified by the client's bridal party via text of the venue change. Our suppliers were called as soon as possible of the venue change.

The biggest impact was equipment rentals, however, everyone acted as a team player and were professional. It went without saying that we worked tirelessly overnight to pull a rabbit out of a hat. The reception was a success and the client was extremely appreciative. I'm not sure how the dust was settled between the client and the original venue, however, they should have received a full refund to help offset the cost for the new reception venue.

Weddings are happy occasions, but sometimes, in the heat of the moment, the stress of it all can turn the day into a total blur. Thankfully, these wedding planners handled their demanding clients with beauty and grace. But seriously, I could never.