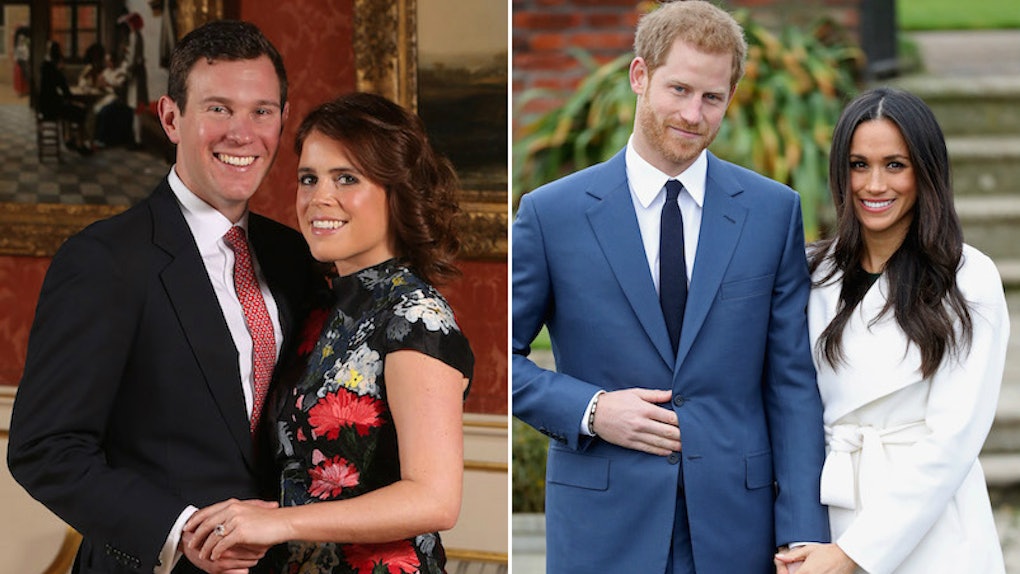 With Princess Eugenie's wedding date rapidly approaching, fans of the royals everywhere are suddenly paying close attention to the Princess of York. While it's impossible to know the actual dynamics within the palace walls, there seems to be an awful lot of comparison going on between Eugenie's impending wedding to wine merchant Jack Brooksbank and Prince Harry's "I Dos" with Meghan Markle. Harry and Meghan, the Duke and Duchess of Sussex, threw a historical event in May 2018 and now some people are like, "Hey, wait a minute... was Princess Eugenie at Prince Harry and Meghan Markle's wedding?" The answer is: Yes, duh. But, I get why you may be confused. Attention is so pointed at Meghan and Harry these days, it's easy to lose track of the other royal family members.

Here's how I know for sure Eugenie and her sister Princess Beatrice were at the wedding: First, there are pictures of them there. Second, their hats.

My first memory of Eugenie and Beatrice is thanks to their memorable (if not infamous) headpieces at the 2011 wedding between the Duke and Duchess of Cambridge. The sisters went down in history when they arrived in statement hats (and when I say "statement," I mean outrageous, shocking, bizarre, remarkable, and any other synonym to "statement").

I know they were at Harry and Meghan's wedding because I was dying to see what hats they picked this time! In a fun plot twist, Eugenie and Beatrice went the total opposite direction and opted for two much simpler, toned down headpieces. Eugenie chose a classic white pillbox hat and Beatrice wore a multi-layered headband.

For comparison, here are the two sisters in 2011 at the Duke and Duchess of Cambridge Prince William and Kate Middleton's wedding, and then again in 2018 at Harry and Meghan's wedding.

What a difference seven years makes on our fashion instincts, eh?

Not for nothing, look at how streamlined Eugenie's dress is at Meghan's wedding compared to her dress at Kate's! And, Beatrice looks like a gorgeous, minimalist peacock, which I mean 100 percent as a compliment.

One more time for the folks in the back.

Of course, this leads us to the next obvious question: What will Eugenie wear at her own wedding? According to the princess, she's known exactly what she's wanted to walk down the aisle in all along. In fact, Princess Eugenie told British Vogue, "I'm not telling anyone who is making it, but I can say it is a British-based designer." She added,

[The dress] is the one thing that I was really decisive about. As soon as we announced the wedding, I knew the designer, and the look, straight away. I never thought I'd be the one who knew exactly what I like, but I've been pretty on top of it.

Additionally, Eugenie says she "isn't stressed at all" about the wedding planning process. "It’s very nerve-wracking because you want it to be perfect but then you [realize] that you’re going to be with the person you love forever and nothing else really matters," she said.

Of course, Prince Harry and Meghan Markle are expected to attend the wedding scheduled for Friday, Oct. 12, at St George's Chapel at Windsor Castle. (Yup. It's the same place they got married.)

Hey, I wonder what hat Meghan will wear...?