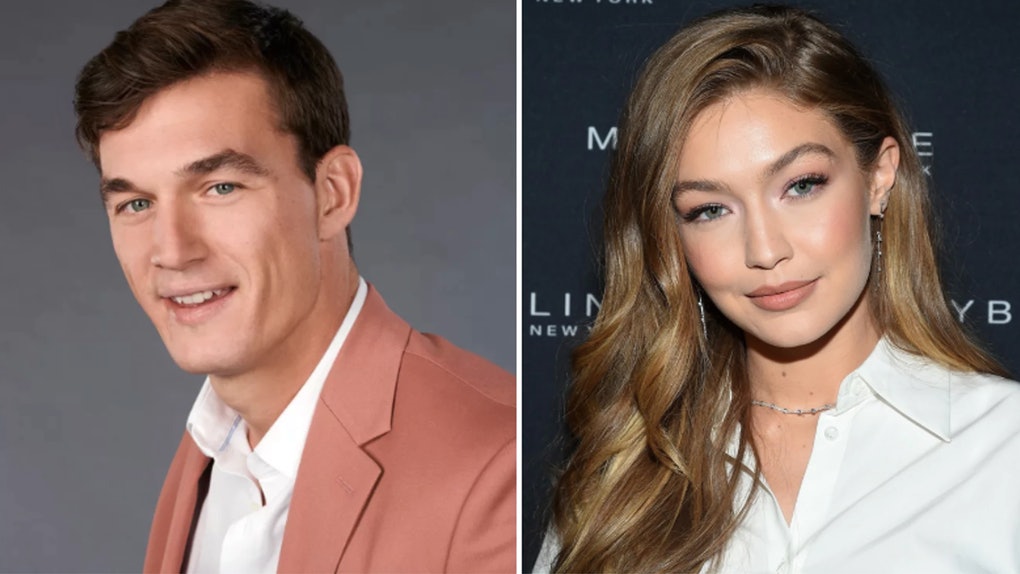 As you're probably well aware by now, one week in a normal person's world is about four months in the Bachelor universe. After all, the show is based around the premise of selecting a spouse from a pool of romantic interests in a matter of 10 weeks, which is something that usually takes, you know, years. It should come as no surprise then that Bachelorette alum Tyler Cameron and Gigi Hadid's vacation to Lake George happened just weeks after the started following each other on social media. In fact, I wouldn't be surprised if Cameron takes Hadid home to meet his family next week.

In case you've missed an episode or two in this saga, let me recap. Since getting dumped by Hannah Brown, Cameron and Hadid have been on four dates together in New York City, so naturally the next step for them was to drive three hours outside the city for a mini getaway in upstate New York. According to Page Six, "two or three girls" came along on the trip to make it #casual, but honestly, the addition of other women just makes this feel even more like the next season of The Bachelor. But here's my question: Is Hannah B. still a contestant?

You might recall that, just a week before this Lake George vaca, Cameron expressed a desire to work things out with Brown. Considering that he and Hadid already had mutual friends in the modeling industry before they started hanging out, it seemed as though they might just be pals. Honestly, the only evidence of their trip was a sighting at Starbucks in Malta on Aug. 15, but considering that there's a Starbucks on every corner in New York City, it seems unlikely that they took the road trip upstate just to visit the Malta location of the coffee chain.

This Lake George adventure wasn't the first time they'd brought friends along for the ride. The maybe-couple also had friends tag along on their date at Frames Bowling Lounge on Aug. 5, as well as on their meet-up at Justin Theroux's bar, Le Turtle, on Aug. 13. It's hard to say whether their occasional group dates are arranged to take off some pressure or because Cameron and Hadid really are nothing more than friends. Unfortunately, the latter doesn't seem to be the case.

Earlier this week, a source close to Hadid told E! News that the couple actually brings friends along to serve as a distraction. "They both like to hang out with a few of their friends to make it seem more casual, but Tyler always ends up staying the night alone at Gigi's house," the source claimed. The same source confirmed that they are "definitely hooking up" and later added, "Their friend groups have been meshing and everything has been very relaxed and easy between the two. It's going in the right direction and he hopes he can hang on to her for a while because they definitely vibe."

Hannah Brown hasn't explicitly commented on the budding relationship since her Aug. 7 appearance on Bachelor Happy Hour podcast, hosted by Bachelorette alums Rachel Lindsay and Ali Fedotowsky-Manno. After Lindsay brought up the potential romance between Cameron and Hadid, Brown acknowledged that she was hurt and confused, but she eventually concluded, "He has every right to do whatever he wants because we were, you know, just hanging out, seeing where it goes. And I am completely fine with that. It was a little confusing, but he can do whatever he wants to, and I know that I can, too."

However, a recent Instagram post indicates that Brown may be having a harder time than she's letting on. On Aug. 12, Brown posted a picture of herself on a beach alongside this caption:

Honest policy: I’m struggling. Life is so different. Since last August, I’ve been a pageant queen, a Bachelor contestant, and the Bachelorette. I’ve been in love with multiple people, I got engaged, I broke off an engagement, and I shared it all with millions of people. My faith has been questioned by thousands who don’t know my heart, and my transparency with my decisions has labeled me promiscuous. Simultaneously, I’ve become a role model for young women and started bigger conversations around faith, and sex.

Does her tough transition from reality TV to reality have anything to do with Cameron? It's hard to say, but I have a feeling that seeing Cameron canoodling with a supermodel (and apparently now going on vacation with her) certainly hasn't been easy.