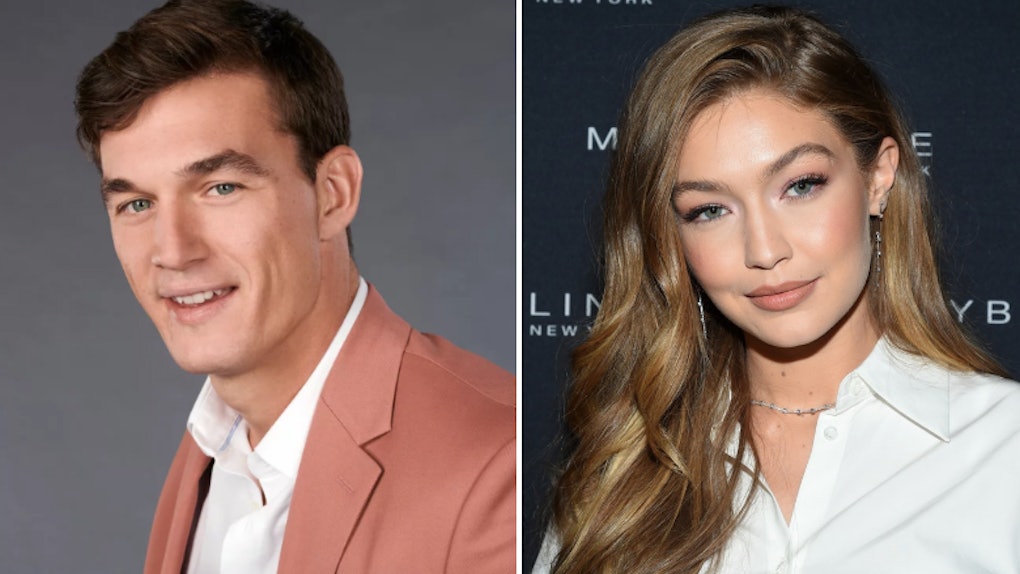 Well, fam, it’s happening. Not long after they were first photographed together in New York City, Tyler Cameron and Gigi Hadid's third and fourth dates took place on back-to-back evenings earlier this week. At this point, I think it’s safe to say their connection is super strong, and they seemingly can’t get enough of spending time together. Are they officially 2019’s new "It" couple? It’s too soon to tell, but nonetheless, I’m incredibly invested in this saga.

On Monday, Aug. 12, Cameron and Hadid were spotted leaving her apartment separately after spending time there together. Us Weekly reports that Cameron left first, followed by Hadid around 45 minutes later. And then, the next evening, they were photographed (together this time!) out and about with friends. Marie Claire reports that they went to Ray’s, a new bar in Manhattan owned by actor Justin Theroux, on what looks like a double date with two pals.

So far, both Cameron and Hadid look pretty casual in all the photos from these reported dates — T-shirts, crop tops, relaxed denim, and sneakers. While neither of them has spoken publicly about spending time with one another, a source told E! News last week, "Gigi is definitely interested in Tyler … They are both taking things slow but have both made it clear they are interested in each other."

I’ll say! Four dates in the span of nine days is a pretty revealing sign of their chemistry. Observant fans also noticed that Cameron liked Hadid’s Instagram post on Friday, Aug. 9 — the first time either one had publicly acknowledged the other since they followed each other on IG back in July. They’re seemingly staying pretty subtle about whatever is going on between them.

In the photos from their reported fourth date on Aug. 13, Hadid and Cameron both look super chill and happy. And while I’m excited to see them together, I feel conflicted… especially after reading Hannah Brown’s Instagram post from Aug. 12, in which she admitted she was “struggling” post-Bachelorette. “Since last August, I’ve been a pageant queen, a Bachelor contestant, and the Bachelorette,” Brown wrote. “I’ve been in love with multiple people, I got engaged, I broke off an engagement, and I shared it all with millions of people. My faith has been questioned by thousands who don’t know my heart, and my transparency with my decisions has labeled me promiscuous. Simultaneously, I’ve become a role model for young women and started bigger conversations around faith and sex.”

Brown wrote that she missed the friends and family who “watched my life explode” in the past several months. It’s no doubt that the reality star has dealt with a lot of drama since her Bachelorette journey ended. After her breakup with Jed Wyatt, it looked like Brown might have a second shot with Cameron — they even spent the night together at her Los Angeles home in early August — before this Gigi Hadid romance blossomed for him just two days later. And while Brown has said that Cameron has “every right to do what he wants,” she also admitted on the Bachelor Happy Hour podcast on Aug. 6, “I wish I would've got a little bit more than two days, but, you know, it's OK."

Truthfully, this is a tough one for me, because I love Brown and want to see her find happiness. But also, after watching Cameron get his heart broken on the show, it brings me joy to see him bouncing back with one of the biggest supermodels on the planet. Last week, a source told E! News how Hadid reportedly feels about her new man. "Gigi thinks Tyler is really cute and nice and liked that he was a good listener," the source revealed. And can anyone blame her? Cameron is a dreamboat.

I guess we’ll have to wait and see what happens from here, but it looks like Tyler Cameron and Gigi Hadid might be doing this thing for real! What a time to be alive, am I right?