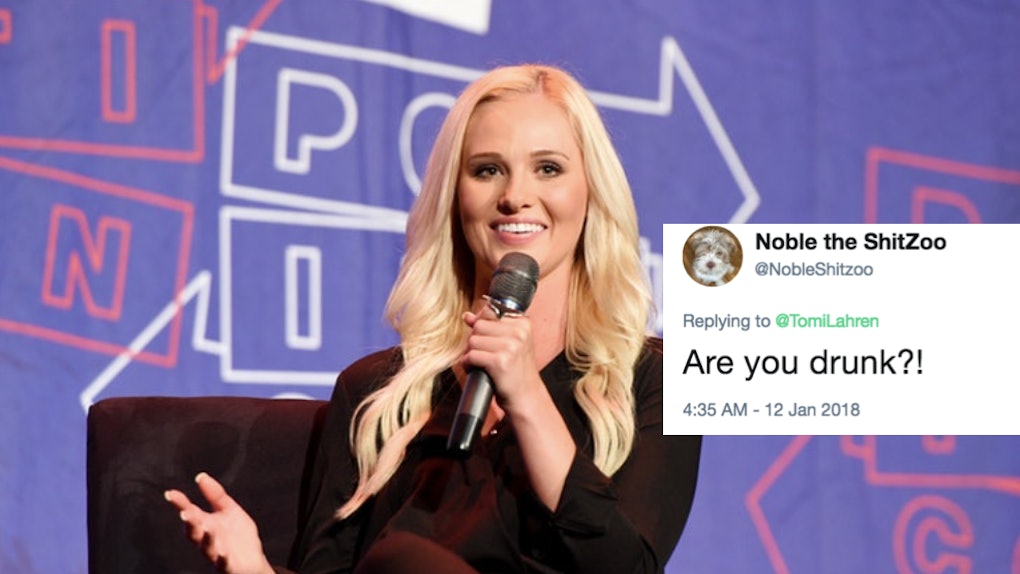 While many of us hoped that pure ignorance would be left behind in 2017, those dreams were unsurprisingly and very quickly crushed by our POTUS, as well as Fox News poster child Tomi Lahren. On Jan. 11, when the Oval Office came together to discuss DACA, Donald Trump — predictably and inappropriately — reportedly referred to overseas countries as "sh*thole countries," according to The Washington Post. (Trump denied that he made the comment.) Lahren replied to the reported quote in an equally offensive tweet that read, "If they aren’t sh*thole countries, why don’t their citizens stay there? Let’s be honest. Call it like it is." So, obviously, tweets about Tomi Lahren's response to Trump's DACA comment are totally calling her out.

If you aren't already familiar with DACA, it was an action created by former president Barack Obama in 2012. It allowed young, undocumented immigrants in the U.S. — known as Dreamers — to apply for deportation protection. The adolescents would undergo a background check and, if eligible, ultimately receive a renewable two-year permit that allowed them to to work and study in the United States. An estimated 800,000 Dreamers in the U.S. are currently protected by DACA. In September 2017, the Trump administration announced its termination.

On Jan. 11, when asked about protection for immigrants at an Oval Office meeting, Trump reportedly grew angry with lawmakers' incessant questioning, and asked, "Why are we having all these people from sh*thole countries come here? Why do we need more Haitians? Take them out." Trump has since denied in a tweet that he used that language, saying his language at the meeting "was tough, but this was not the language used." However, Senator Dick Durbin, who was in the meeting, claimed on Friday that Trump did.

If that doesn't somehow manage to completely ruin your day, our conservative pal with a habit of putting her foot in her mouth, Lahren, came in, since she never fails to drop in with something distasteful to say. Backing up Trump's totally nonsensical and widely controversial alleged statement on DACA, Tomi stated her own offensive POV in a tweet:

As horrific as her comment was, Twitter came in with some excellent intellect and attitude. Hundreds of replies came through to support the anger and disbelief that many people felt after seeing Lahren's response. And regardless of if they support Trump or not, many people on Twitter are almost totally united as one against Lahren's overt insensitivity.

Some reactions are a little more fact-based and strategic, to prove Lahren wrong:

Others' tweets were just straight-up hilarious, because nobody on Twitter was having any of of that B.S.

Thank you, Twitter, for coming in and telling Tomi like it actually is. Everyone came to America from another country at some point, since, as we all learned in elementary school, America is one giant "melting pot." Everyone has lineage outside of America in other countries, so in addition to being incredibly offensive, Trump's alleged comment and Lahren's tweet don't make any sense in the slightest.

If you're still feeling down about the whole situation, there are also a ton of tweets to President Donald Trump that might improve your mood, because they totally tear apart his viewpoint. Plus, news anchors and journalists such as Don Lemon and Anderson Cooper have responded to Trump's reported comment with powerful statements that are leaving the internet #shook. Hopefully, Trump and Lahren will read at least a few of these intelligent and argumentative reply tweets — but if not, at least the comments can give the rest of us some faith that there's still plenty of humanity and compassion in our nation.