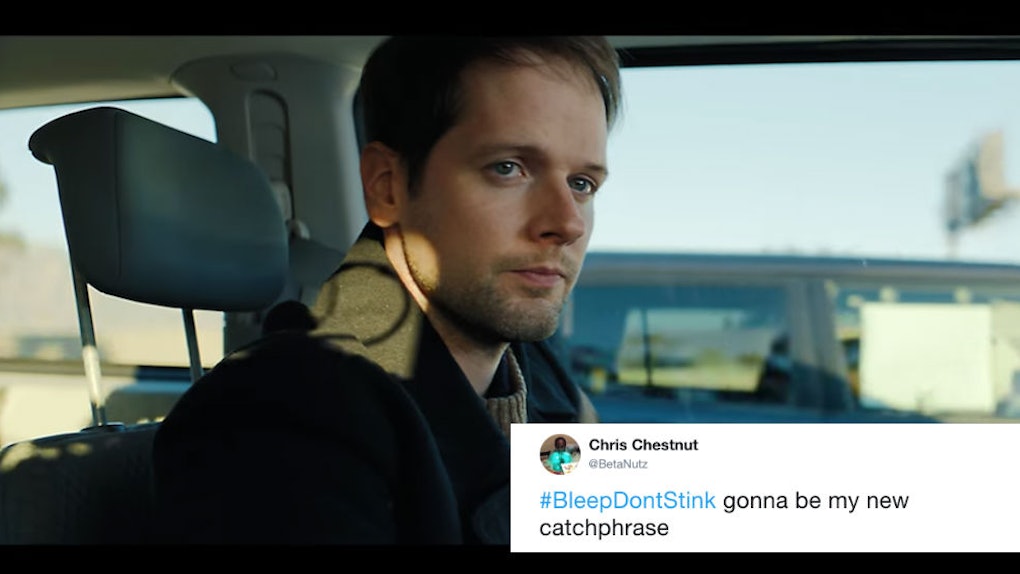 The Super Bowl may be a ton of fun, but there is also one major drawback to every football party. After all those chips, dips, wings, and other tasty treats that populate every single Super Bowl party all over the country, it is the bathrooms that become a real war zone. Thankfully, Febreze has your bathroom covered. The air fragrance's new ad introduced viewers to Dave, a man whose #BleepDontStink, and offers its services in taking care of all your non-Dave party guests. Right after it aired, tweets about #BleepDontStink proved Febreze's commercial was a winner. Check them out below.

The new Febreze ad was one of the standouts of a night known for premiering the best commercials of the year. The hilarious clip was a short mockumentary about a man named Dave, who was born with the enviable superpower of going to the bathroom without stinking it up. Or, to put it bluntly, his #BleepDontStink. A couple ads about Dave popped up during the night, interviewing his parents, ex-girlfriend, and high school coach, all of whom marveled at his strange ability to take a trip to the bathroom without leaving it smelling like... well, it usually smells after someone pays a visit. Although Dave's bleep doesn't stink, we know all too well that those people you invited over for your Super Bowl party are dropping some stinky bleeps, which is where Febreze comes in to save the day.

Check out some of the best Twitter responses to Febreze's hilarious #BleepDontStink Super Bowl ads below:

You can check out the full, minute-long #BleepDontStink Febreze ad that had Twitter blowing up below:

That longer commercial was split into a couple of 30-second ad spots, which aired during the second quarter of Sunday night's Super Bowl game between the Philadelphia Eagles and the New England Patriots. While the football game was heating up on the field, Febreze came to play in the game's annual commercial wars with a viral campaign already in mind and ready to implement. Febreze even got some celebrity help with some #BleepDontStink tweets from football superstar Terrell Owens and rap star/actor Nick Cannon:

The creative director of the ad team behind the Febreze commercial, Lance Parrish, shared his vision with the ad and the #BleepDontStink social media campaign with AdAge, saying that he hopes someday, spraying Febreze after doing your business in the bathroom will become a secondhand part of everyone's bathroom routine, like flushing the toilet or washing your hands:

The long-term vision we're percolating here with Febreze is really creating behaviors and habits. We'd love someday to have it so somewhere between flushing the toilet and washing your hands, spraying Febreze is top of mind for everyone.

Leave it to Febreze to turn a rather unseemly topic into one of the funniest commercials of the Super Bowl LII night. The mockumentary nature of the ad could also easily lend itself to followup commercials, which continue to follow Dave and his mysterious #BleepDontStink superpowers. I guess we will see how far this new ad campaign will go throughout 2018, if Febreze continues to air these Dave commercials.

The full minute-long #BleepDontStink Febreze ad did not air in its entirety during Super Bowl LII on Sunday night. You can check out the actual ad spot that NBC aired below:

Febreze's commercial was one of the many big ads that stole the night in between the Philadelphia Eagles and the New England Patriots' nail-biting plays throughout the night. Other standouts included Peter Dinklage and Morgan Freeman battle-rapping in a Doritos and Sprite commercial, Cardi B voicing Amazon's Alexa, and Danny DeVito bathing in chocolate dressed as an M&M.

More like this
Britney Spears Fans' Tweets Reclaiming Justin Timberlake's May Meme Offer Alternatives
By Cianna Garrison
This 'Stranger Things 4' Theory About Eleven's Past Is Super Dark
By Ani Bundel
These Tweets About Beyoncé On Netflix's 'Selena: The Series' Are Too Much
By Dylan Kickham
Stay up to date