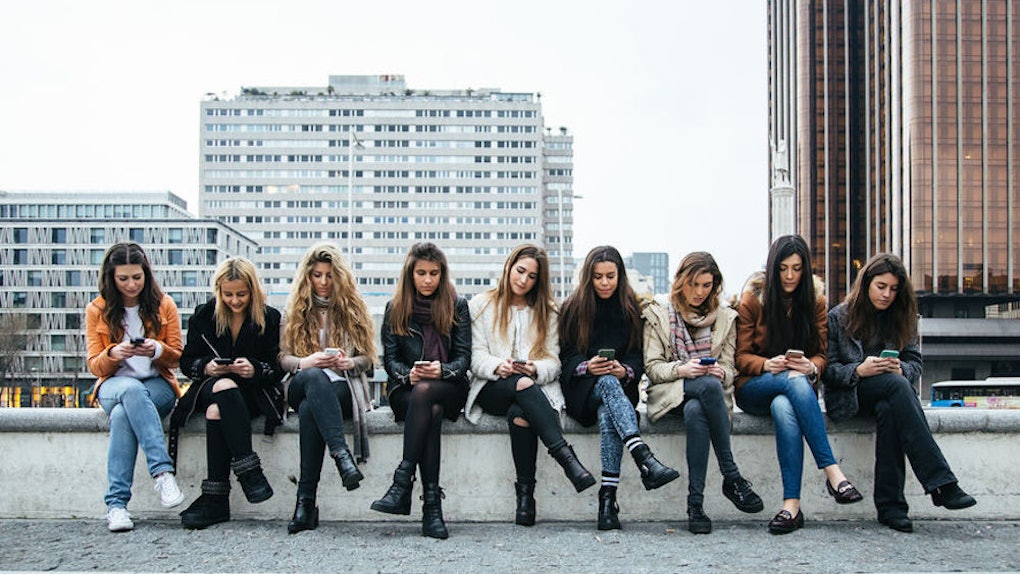 Trying To Make Plans With A Big Friend Group Is Such A Struggle, TBH

Summer means lots of time spent with your girl crew. You'll likely take a trip, even if it's just for the weekend, and hit up the local spots on a Saturday night. If you're all working, then you'll meet up for happy hours when the day is done and email during the day with summer getaway ideas. But, it's not always as easy as emojis and saying, "Be right there!" To be honest, trying to make plans with a big friend group is such a struggle, and you really have no choice but to go with the flow.

Everybody means well when they're trying to make plans, but it's never as simple as picking a time and place. When your friend group is gigantic, there are so many schedules to coordinate, and then you have to count on the fact that Lindsey will likely be late. You need time to curl your hair, but what if you guys ended up ordering takeout instead? It's a mess.

You try and keep up with the group chat, but the second you look away, you've missed out on a thousand memes and a game plan that's buried amongst them. The red notification bubble reads in the hundreds, and you have at least one missed FaceTime call from a friend. These are the 10 phases you definitely go through when you're trying to make plans with a big friend group. Thank goodness, you're always down for pizza and a movie.

All of the chaos starts with one text. Your friend saw a food special for her favorite restaurant, or is bored and wants to hang with every single one of her besties. So, she takes to the group chat with a simple "What's everyone up to?" Seems innocent, right? Think again, because the best form of chaos is about to go down, and you may want to hit mute if you're in the middle of something important. You're already going through your schedule in your head, and coming up with ideas for the group. But, you figure you'll wait until someone else responds first.

2. At First, Nobody Responds

At first, everybody's busy or likely not by their phones. Some people may see the message and choose to ignore it for a few minutes while they wrap up a bit. Others won't respond until hours later. (You know if this is you.) It's like in all of those cartoons when you see the ball of dust roll across the screen. Everything's so quiet — almost too quiet. Enjoy it for that second, though, because soon enough, all of your besties are chatting it up. Are you and your besties saying "same," yet?

3. Then, The Group Chat Is Chaotic AF

This is when your phone can't stop lighting up. You'll be in an important meeting, or having dinner with the family, and have to flip your screen to the back side. You turn the sound off because hearing the "ding!" go off every five seconds is causing such a scene. Suddenly, everybody has something to say, and that's when a thousand ideas get thrown onto the table. Maybe you should all see a movie, or I heard that new Thai food place could be really good! It's basically one big brainstorm session, and you have to assume during this phase no decisions will be made.

There's always one friend who has food on their mind. This is the person in your crew who's basically Joey from Friends, and has a lot of love for pizza. They pack snacks whenever you go somewhere, even if it's just shopping at the outlets or taking a jog around the park. Take it from me (because I'm so that friend), that you never know when hunger strikes. I'll always be the first one to mention dinner or grabbing ice cream in the group chat, and that's likely when things get even more complicated.

Two things happen when you're making plans with a big group of friends. The first: Everybody has a place in mind they want to go. The second: No one knows where in the world they want to go. Each scenario is equally troublesome. On the one hand, you need to make a compromise, and on the other, you need to come up with some options.

Especially when it comes to food, people never know what they're truly in the mood for. One second your bestie is suggesting breakfast food at the diner, and the next she's looking at menus online for sushi. Oh, boy.

6. You Start Talking About Something Else

At this point in the conversation, no decisions have been made. You've tried your hardest to keep everyone focused, but The Bachelorette got brought up, and everything went up in flames because somebody didn't get a rose. One friend starts talking about her relationship drama, and the next found something funny on Twitter that just couldn't wait.

In this phase, you always need to step up and get the group back in order. Otherwise, no plans will get made or someone will fall asleep, and it's game over.

7. You Finally Make A Decision

Thank goodness, am I right? Somewhere amongst all of the memes and chaos, you and your friends have finally made a decision. You're going to grab dinner at that new Greek place, and then catch a movie. The new film with Ryan Gosling is always a good idea, although you may see the animated one if you all get there and change your mind.

Yes, decisions still come with some options here and there, but you're just glad that you're going to get to hang with your crew. There's so much to catch up on, even though you've spent all day talking and planning the next trip.

8. Somebody Always Bails At The Last Minute

There's always one person who, when all of the plans have been settled, has to back out. This is the girl who's a bit flakey, or just genuinely forgot that she had a family event. Maybe she's tired, or decided that going out probably wasn't a good idea considering she has work bright and early. In the moment, when everyone was hyping up the bar, she just didn't want to bail. But, she sends that a text for canceling plans in the group message and a heartfelt, "Have a good time, though!" You'll miss her, but you're also on a time crunch. No time to be persuasive when there's an outfit to pick out.

9. Everybody Has To Be Picked Up

You likely have one or two friends who always offer to drive. This is probably the most functional part of making plans with a big friend group, although it's also quite tedious. You all either decided that you'll meet at one person's place, or are waiting until the girl with the biggest car makes the rounds. Grabbing Ubers is sometimes necessary, and you have to do some quick math to decide whether you need an X or an XL. On the bright side, this phase normally means everyone is ready to go and that you've started making some sweet memories with your besties.

10. You Have So Much Fun, And Do It All Over Again Tomorrow

Despite the fact that making plans with a big friend group is such a struggle, you'd do it all again tomorrow if you had to. Truth is, the last phase makes it all worth it, because you're having the time of your life with your crew by your side. Even if it's not the greatest night, or the trip doesn't quite go to plan, you alway come out of the experience with lots of stories to tell.

The group chat will be lit with messages the next morning about how Alexa ordered those super good churros, or how next time you all go hiking, you should probably pack more snacks. Those moments make all the stresses of planning worth it. So, back to phase one?