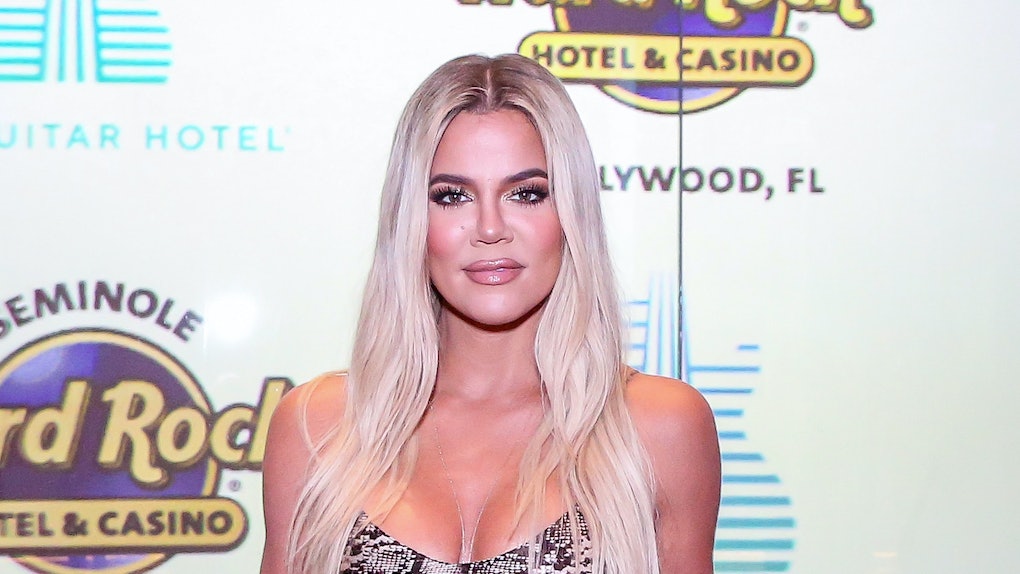 Just two days after Tristan Thompson raised eyebrows with a super flirty comment on Khloé Kardashian's Instagram post, the basketball star is showering his ex with affection once again amidst the launch of her KKW Fragrance, Pink Diamond. While it might normally mean something if your former boyfriend got you balloons spelling out the name of your new perfume, the Keeping Up With the Kardashians star took to Instagram to clear the air about their relationship. According to the fitness guru, Tristan Thompson’s gift for Khloé Kardashian doesn't mean what you think it does, instead shedding some light on their current relationship.

If you've been keeping up with the new KKW Diamonds Fragrance Collection by Kourtney, Kim, and Khloé Kardashian, you know that the three individualized scents finally dropped on Friday, Nov. 8, giving fans just one more chance to emulate their favorite Kardashian sister. To celebrate the drop of her individual perfume, Pink Diamond, Khloé took to her Instagram Story to share a photo of a festive balloon arrangement that she was gifted from none other than Tristan Thompson.

As she panned over the metallic pink balloons, which spelled out "Pink Diamond," Kardashian told the camera, "Today was the launch of my Pink Diamond collection with KKW Fragrance and I got these balloons sent to me from baby True and Tristan, and I really appreciate the love and the thoughtfulness."

Seeming to allude to fan speculation surrounding the nature of the exes' relationship, Kardashian cleared the air and confirmed that things were strictly platonic. "I’m really proud at the co-parenting place that we are in," she added.

It's not the first time that the mom-of-one has opened up about keeping things civil with Thompson as they co-parent their daughter True together. When Ryan Seacrest asked her about how she felt about the father of her child back in September, she told him that she was ready to "move on."

"I’m not someone who holds a grudge. If I do that it’s only going to affect me," she told the host. "That chapter is closed for me. I want all of us to move on and to be happy, successful people. I just want everyone to just be better people with each day. That’s genuinely how I feel."

While Kardashian has made no secret of where she stands with Thompson, the NBA star has been keeping people guessing (and sometimes even angering fans) with his recent string of flirty comments on his ex's Instagram. Just two days earlier, he commented with hearts and crown emojis on a promotional photo that the reality star shared for her fragrance, and in a recent KUWTK promo, he can be seen giving his former girlfriend a pink diamond ring.

We might not know how Thompson feels about his ex, but Kardashian is making it clear once again for the people in the back that she's moved on and the former flames are currently concentrating on co-parenting their daughter True as best as they can.