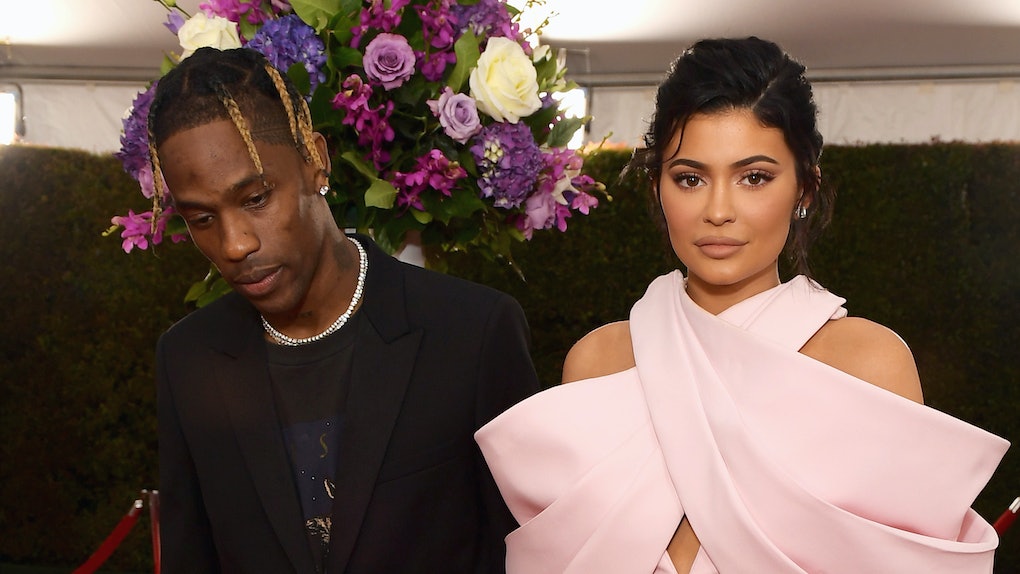 These last few weeks have brought us not one, but two reported Kardashian cheating scandals. Mercifully, one of them seems to have blown over already. The day before Jordyn Woods' appearance on Jada Pinkett Smith's Red Table Talk, during which she gave her reported side of the Tristan Thompson cheating scandal, reports surfaced claiming that Kylie Jenner had confronted Travis Scott for reportedly cheating on her. The reports were never commented on by anyone in the family, but Scott did cancel a show in Buffalo, NY, that night. Elite Daily reached out to Scott and Jenner's teams for comment on the rumors, but did not hear back by the time of publication. Scott is back on tour now, and Travis Scott's shoutout to Kylie Jenner at his concert on March 3 will come as a relief to all of you Ky and Trav stans out there.

According to Us Weekly, during his concert in New York City on Sunday, March 3, Scott gave some sage advice to the audience. He reportedly said to the crowd, “Remember to keep your family first,” then reportedly referred to Jenner as his "wifey" again. Elite Daily reached out to Scott's team for comment on the shoutout, but didn't hear back by the time of publication.

On Thursday, Feb. 28, Scott tweeted that he had to cancel his concert in Buffalo, NY, due to illness. TMZ reported, however, that the concert was actually canceled so Scott could stay in Los Angeles and work things out with Jenner, who had reportedly "accused him of cheating." Elite Daily previously reached out to Jenner and Scott's teams for comment on the cheating rumors, but did not hear back by the time of publication.

Scott had reportedly flown home to L.A. on Feb. 27 to spend some time with Jenner and Stormi, and while home, Jenner “claimed to discover 'evidence' he cheated on her," reportedly causing a big fight between the two that continued into Feb. 28.

In a statement to E! News, however, Scott's representation "strongly" denied the cheating rumors. "The reason he stayed home from his show tonight was very much because of illness," the statement said.

In the days since, Scott has deleted his Instagram (his Twitter account is still active), but it doesn't appear that the couple has broken up or anything like that. So let's take him reportedly giving Jenner a shoutout during his show as a good sign for now.

Outside of this reported Jenner and Scott drama, the internet is still reeling with the Kardashian-Jenner clan's public reactions to Jordyn Woods' Red Table Talk appearance.

On Friday, March 1, Woods appeared on Smith's Facebook show to reveal her reported side of the whole cheating scandal. She told Smith that at an after-party at Thompson's L.A. house that went early into the morning, Thompson kissed her as she was about to leave the house. There was a moment in the interview where Smith asked Woods if she felt she was the reason Kardashian and Thompson broke up. Woods said no, and Khloé Kardashian had a very public reaction to that.

She followed that up with another tweet that kind of defended Thompson, while also not defending him... ?

Tristan is equally to blame but Tristan is the father of my child. Regardless of what he does to me I won’t do that to my daughter. He has been addressing this situation PRIVATELY. If Tristan were to lie publicly about what conspired,then yes I would address him publicly as well.

Kardashian got a lot of backlash in response to these tweets, as they put the onus of Kardashian and Thompson's failed relationship on Woods, whereas people on Twitter believed Kardashian should have been angrier at Thompson for cheating on her multiple times.

Kardashian eventually backtracked in more tweets, saying it had been a hard week and admitting that it was Thompson's actions that broke up their family.

Suffice it to say that between Kylie Jenner and Travis Scott and Khloé Kardashian and Tristan Thompson's cheating rumors, we could all use a break from trying to keep up with the Kardashians.