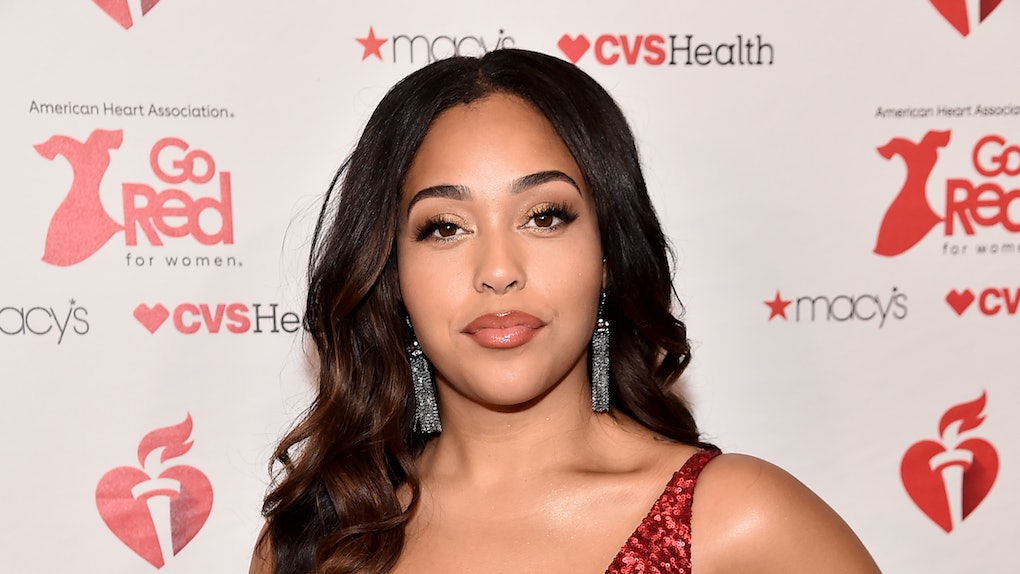 We knew she was going to try and save herself. We just didn't know how. But Jordyn Woods appeared on Jada Pinkett Smith's much-anticipated Red Table Talk Facebook Watch show on Friday, March 1, where she straight-up denied that she hooked up with Tristan Thompson behind Khloé Kardashian's back. You heard me. And if you missed this thing you need to go watch it ASAP, because Jordyn Woods' quotes from her Red Table Talk interview will legit have your jaw on the floor. I mean, after weeks of speculation, we now finally have confirmation of how this shady mess actually went down!

But let's rewind the tape for a sec, because it's been a minute since TMZ first broke the news that Tristan Thompson and Khloé Kardashian had reportedly broken up after Thompson allegedly cheated on her with Woods at an L.A. house party on Tuesday, Feb. 19.

Sidebar: How does one go about getting a life where you get to turn up on a Tuesday? Lemme know.

Anyway, TMZ then reported on Feb. 26 that Woods would be appearing on Jada Pinkett Smith's Red Table Talk show, and a source claimed that Pinkett Smith intended to "to create a healing between Jordyn and Khloé" and "give Jordyn a platform to tell her story."

I had questions. And so did Kardashian family friend Larsa Pippen.

"Can’t wait to see which version of her story she tells,” she wrote under a video Hollywood Unlocked posted on Instagram ahead of the Red Table Talk interview. "Hope it’s the same she told @khloekardashian when she checked her."

Look, I'm not gonna lie, I was mad excited to see how Pinkett Smith was gonna get this whole "healing" to go down. And now that Woods has finally broken her silence, we know that she went with a combination of facts from rumored stories.

And there were tears. Lots and lots of tears.

Woods told Pinkett Smith that her friends were the one to suggest going to an after-party at Thompson's home and that he did not personally invite her over. Later in the interview, she said:

I should have gone home after the party. I shouldn’t have even been there ... Never once was I giving him a lap dance, making out with him, sitting all over him. It’s just we’re all together; we’re in a group. Never once did we leave the public area, go to the bedroom, go to the bathroom ... I was drunk. I was not tipsy – I was drunk. But I was not beyond the point of recollection. I know where I was. But on the way out, he did kiss me ... No passion, no nothing.

Woods clarified that she was sitting on the arm of the chair Thompson was sitting in, which led to the reports that she was giving the NBA star a lap dance. She took responsibility for her body placement and admitted to not "thinking right" in the moment. Explaining her early morning departure from the gathering, she said there was always someone else with her and Thompson.

The question is, do we believe Woods? Do the Kardashians? Because the 21-year-old model also used the opportunity to reach out to both Khloé and her (former?) bestie Kylie Jenner and plead her case.

Here's what she said about the sisters:

I know I was trying to protect Khloé's heart. She doesn't deserve this either. People have even dehumanized her in this situation to where they can't feel for her, and it's not fair that she has to deal with this either. And the last thing I wanted to do was be that person. I'm no homewrecker, I would ever try to hurt someone's home, especially someone I love... I really just hurt so many more people by not telling the truth...I know I'm not the reason Khloé and Tristan are not together.

She didn't exactly beg the family for forgiveness, but Woods has definitely spoken her truth. As for the Kardashians' reactions... well, time will tell.

More like this
Peter Weber’s Quote About How ‘Bachelor’ Producers Get Contestants To Kiss Is Wild
By Abby Monteil
Colton Underwood Is Reportedly Making A Netflix Show After Coming Out As Gay
By Dylan Kickham
This 'Drag Race' Season 13, Episode 14 Clip Shows The Top 4 Getting SO Real
By Lexi Williams
Stay up to date