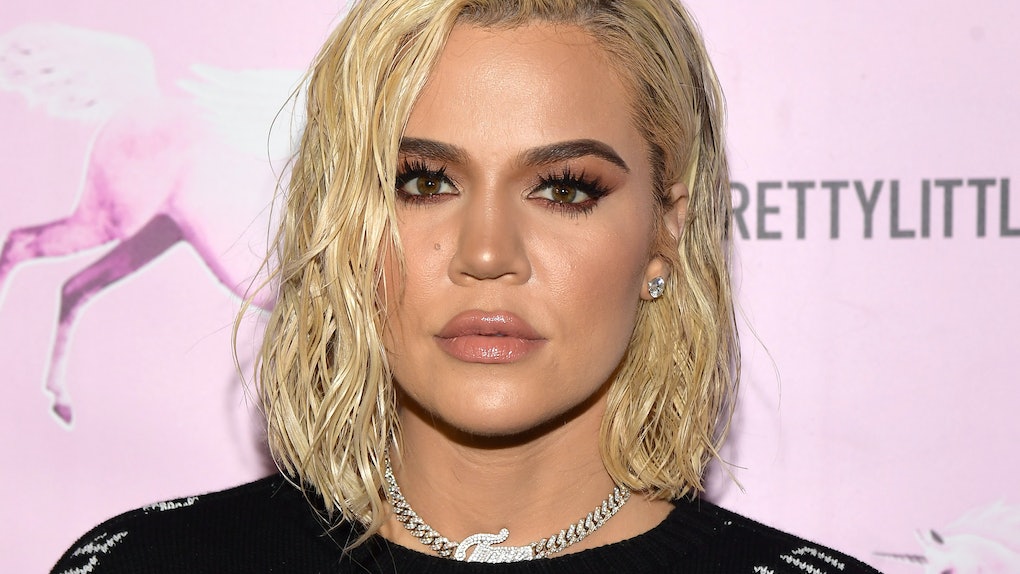 Khloe Kardashian's Tweet About Tristan Thompson Just Put Him On Blast, Too

Khloé Kardashian just made it very clear that even though Jordyn Woods has been getting a ton of heat from her reported hook up with Tristan Thompson, Thompson himself is also to blame. After Woods appeared on Red Table Talk with Jada Pinkett Smith to address the rumors that she and Thompson hooked up, Kardashian called her out for lying on Twitter. But don't worry, Khloé Kardashian's tweet about Tristan Thompson shows that she's not taking his side at all in this either.

A small recap on this whole saga: It was reported on Tuesday, Feb. 19, that Thomspon reportedly cheated on Kardashian with Woods a few days earlier. Multiple sources told Us Weekly that the pair were spotted getting cozy and "making out" together at a house party in his home. Elite Daily previously reached out to Woods, Kardashian, and Thompson's teams for comment but no party responded in time for publication.

And now, Woods revealed her side of the story on Friday, March 1, telling Smith, "Never once was I giving him a lap dance, making out with him, sitting all over him," and adding "It’s just we’re all together, we’re in a group. Never once did we leave the public area, go to the bedroom, go to the bathroom."

Woods admitted that Thompson did kiss her before she left the party, but claims that there was "no passion" and "no tongue" involved. She also told Smith that she "can't point fingers" at Tristan, because she "allowed myself to be in this position", and that she was "drunk" when the kiss went down. She told Smith that after it happened, she "was in shock".

But Khloé was having none of it, tweeting about Jordyn Woods' interview and claiming that she was lying. She also added that Woods has yet to call her privately and talk about the situation, and that Woods is the reason her family "broke up." She wrote,

Elite Daily reached out Jordyn Woods' team following Khloé's accusation, but did not hear back by the time of publication.

But Kardashian took to Twitter almost immediately after to tweet her thoughts on Thompson as well, telling her fans that while he's also "to blame," he hasn't lied about the alleged hookup publicly like Woods has. She wrote,

Tristan is equally to blame but Tristan is the father of my child. Regardless of what he does to me I won’t do that to my daughter. He has been addressing this situation PRIVATELY. If Tristan were to lie publicly about what conspired, then yes I would address him publicly as well

Thompson has not spoken publicly about the matter, though I'm not sure anything he could say could make the situation any less dire than it already is. Stay tuned, guys.

More like this
Travis Barker's Birthday Instagram For Kourtney Kardashian Was So Extra
By Lydia Wang
Why Did Addison Rae Deactivate Her Twitter? Fans Think This Is The Reason
By Brandy Robidoux
Britney Spears' Instagram Message To Fans "Concerned With Her Life" Is So Positive
By Brandy Robidoux
Stay up to date