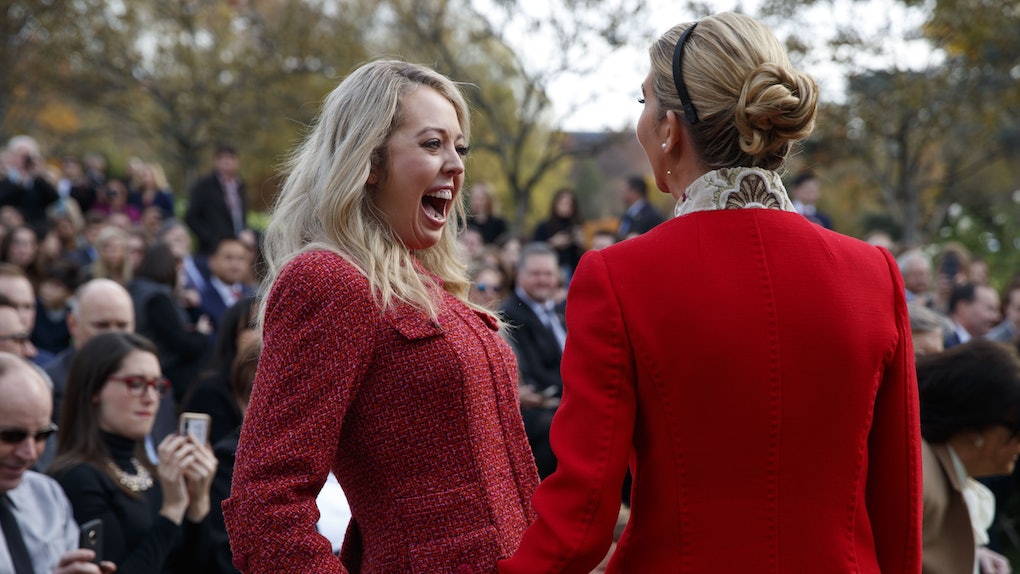 This month will mark the first full year President Donald Trump has been in office. While much of the focus on the White House drama has revolved around first daughter Ivanka, Trump's younger daughter Tiffany has remained largely out of headlines (and the picture at large). So what's the deal with these two? Tiffany and Ivanka Trump's body language suggests it's a complicated relationship, according to experts.

On Dec. 26, the half-sisters made waves (pun intended) when they joined forces whilst poolside at Mar-a-Lago to wish the world a Merry Christmas. The Instagram video featured both women bikini-clad and making selfie kissy-faces. Not surprisingly, it rubbed some people the wrong way. And this was the second time in two months the duo's public appearance involved puckered lips, following the Thanksgiving turkey pardoning ceremony at the White House (a joyous occasion indeed).

But any of you who've been selfie-ambushed by a well-meaning drunk acquaintance know that the reality of the friendship is not always as rosy as the filter might make everyone believe. So when we see the air kiss thing happening between two high-profile half siblings repeatedly, it's fair to ask whether it's frenemy posturing or legit love, or even something more complicated. (Dare I invoke the Queen Elizabeth/Princess Margaret comparison? Anyone else out there having to refrain from making constant parallels to The Crown?)

The two women obviously have a connection, but what it entails remains an enigma for most of us. Fortunately, I spoke with two body language experts to help cut through all the noise. One of the experts, Dr. Lillian Glass, offered her assessment of the first daughters' dynamic.

Glass sees clear a genuine affection and love between the two women. "Tiffany really lights up when she sees Ivanka," she says. "You can tell in the first photo as she leans back, in excited body language and genuine facial expression, with open mouth and raised cheeks."

Glass also perceives a dynamic in which Tiffany knows her place in the family and doesn't vie for attention. "[Tiffany] knows Ivanka is the one that needs to be out front and center," she says. "There is genuine respect for her sister and her position. Tiffany stays in the background with Arabella and Ivanka, once again knowing she is not out front and center and knowing that is her sister's child as to not hog the limelight. She maintains her distance respectfully."

But Susan Constantine, the second body language expert, didn't totally share the same view of the sisters' connection. She saw their dynamic to be, at times, at odds, with Tiffany tending to display more of a spontaneous vibe that her sister may be put off by. (Classic Margaret!)

Constantine notes the way Arabella strays closer to her aunt than her mother, and how Tiffany seems to be enjoying herself. She says, "I think Ivanka is more threatened by Tiffany [than the other way around]. Her sister is much more spontaneous, and Ivanka tends to be a bit more reserved; she may be resentful of her playfulness. Ivanka is in control, in power. I don’t see Tiffany that way at all." (And in the photo of just the two of them, where Tiffany grabs her sister's arm towards her hip, Constantine says this is a power play.)

As for the red-dressed hair kiss? Constantine describes it as "very phony, insincere," and added that "the air kiss is never a felt kiss. It has absolutely no significance whatsoever. Phony, artificial, not genuine affection."

Their poolside Christmas video didn't seem to improve the sisterly image much, in Constantine's view. "All of it is contrived, it’s designed specifically to gain attention," she says. "Even though they’re close to one another, they’re both disconnected. They’re connected with the camera in front of them, individually. They’re both focused on their own display for self-gratification." (Ouch.)

Beyond their physical chemistry, there are various points of evidence from which to extract clues to what Ivanka and Tiffany's relationship is like. In her first book, The Trump Card: Playing to Win in Work and Life, Ivanka mentions how she put in a good word with her father to help Tiffany get a credit card with an allowance when they were younger. "Tiffany was thrilled and relieved," she writes, referring to herself as "Big Sis." (Ahem, Elizabeth.)

Clearly there's some sisterly love happening, but rumors abound about their actual dynamic — like one that Ivanka reportedly tried to kick her sister out of Donald Trump's will — especially since Donald Trump took office and Ivanka's role has become central in the White House. As Vanity Fair points out, while they have a self-described closeness, there's the issue of their father's divorce and affair with Tiffany's mother, Marla Maples, that's hard to erase from memory.

So we can't necessarily confirm or deny the status of this friendship/sisterhood/ripe-for-the-picking Netflix Original fodder. But based on their body language? The dynamic between Tiff and her "Big Sis" might not be that much of a stretch to Elizabeth and Margaret after all.