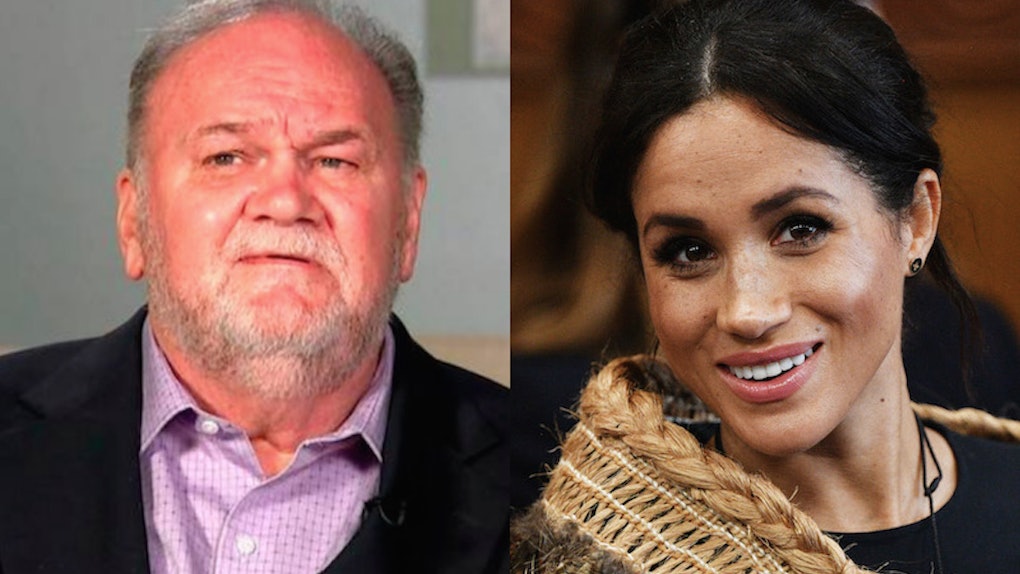 Thomas Markle's Comments About Meghan "Ghosting" Him Are So Unhelpful

Thomas and Samantha Markle aren't letting 2018 end without getting into the news cycle one last time. While Samantha Markle spent her weekend tweeting her grievances about the royal family's Christmas card, Thomas Markle did another TV appearance during which he complained about his duchess daughter. Thomas Markle's comments about Meghan "ghosting" him are just another addition to the never-ending list of interviews he has done this year. Seriously, I feel like these interviews have happened once a month for the entirety of 2018, and all I have to say is oy-freaking-vey. Elite Daily reached out to Kensington Palace for comment on Thomas Markle's recent comments, but they declined to comment.

In an interview with Good Morning Britain, his first since Meghan's pregnancy was announced, Markle said it's "ridiculous" that his daughter has ghosted him. Referencing the staged paparazzi photo incident that led to him not attending Harry and Meghan's wedding, Markle said to Piers Morgan, “For that incident, I’ve apologized 100 times – I don’t feel that’s worthy of being shunned or ghosted, that’s ridiculous.”

He went on to say that he's surprised she's acting in such a "rude" way, seemingly not realizing that he has been rude in interviews toward her on a boatload of occasions this year.

His overall complaint throughout the whole interview was her lack of responding to him when he tries to reach out. “I’ve been trying to reach out for several weeks – every day I try to text her, I just haven’t received any comment back," he said. "I just keep asking her to respond back to me and I haven’t got any response back. I’ve sent letters as well.”

Markle also spoke of Meghan's pregnancy, saying, "There has to be a place for me, I’m her father — and I will be a grandfather to her children." It seems like the Duchess of Sussex really isn't interested in adding any more stress to her life and current pregnancy than she needs to, which is fair, considering all of the stress Thomas and Samantha Markle have caused since the spring.

Morgan asked if Markle had any message he wanted to send to his daughter, to which he responded, "I love you very much, you’re my daughter and I would really like to hear from you. Whatever differences we have, we should be able to work them out."

Morgan also gave Markle the opportunity to send a message to Queen Elizabeth, which is laughable, because if Meghan Markle isn't responding to his messages, the Queen of England sure as hell isn't going to.

"I would appreciate anything [The Queen] could do," Markle said.

According to a screenshot obtained by Twitter users with access to Markle's private Twitter account, Markle tweeted on Dec. 14, "Interesting that the Duke and Duchess of Sussex have their backs turned. Is this towards the world or just the Ragland and Markle family? It's a bit sad. Face the Christmas spirit." Anytime anyone says something shady to me from now until New Year's, I'm going to reply with "Hmmm, a bit sad. Face the Christmas spirit." Elite Daily reached out to Kensington Palace for comment on Samantha Markle's tweets, but they declined to comment.

The photo Samantha Markle is complaining about is a black-and-white photo from Harry and Meghan's May wedding showing them watching a fireworks show.

There is literally nothing wrong with the photo, but according to Samantha Markle, this is an insult to Christmas.

According to E! News, Markle went on in her tweets, "It's incredibly rude to turn your back in a Christmas photo that is meant to share warmth and good wishes with the world. Those. that criticize me for pointing out the truth, need to get that brown stuff off their noses. I hear the worlds smallest violin playing."

Something tells me this "ghosting" of Thomas and Samantha Markle is going to continue, because their continued commentary on the situation isn't exactly helping the situation.