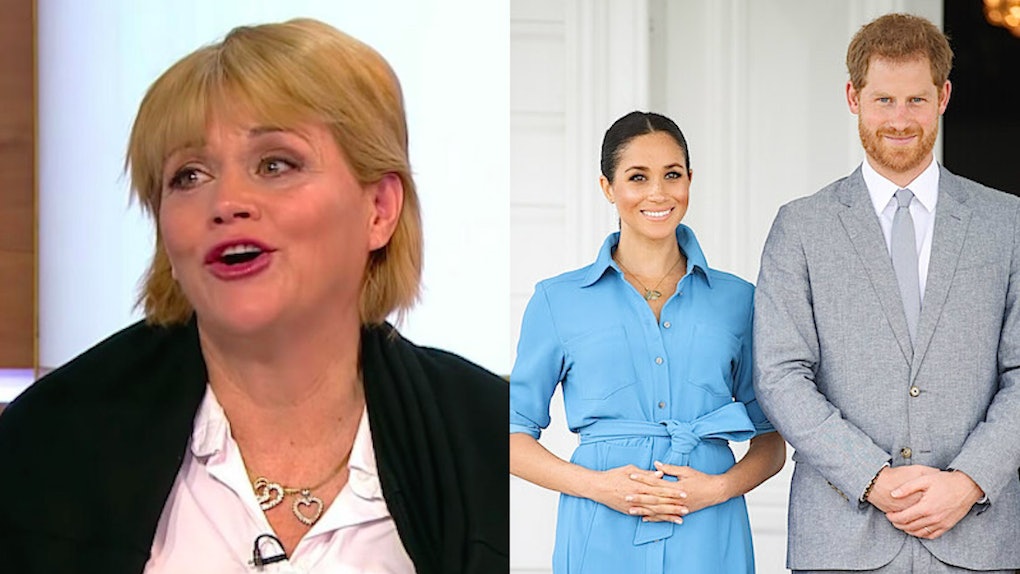 Samantha Markle is always keeping me on my toes. Just when I think she's finally had enough with the public bashing of her half-sister, she comes out with a new statement proving me wrong, once again! I truly love this cycle we're all in! And just in time for the holidays! How quaint. The Duchess of Sussex's sister's most recent complaint is about something that wouldn't seem like a big deal at all: a Christmas card. Yup, Samantha Markle's reaction to Meghan and Harry's Christmas card is the newest addition to her litany of shady comments about her sister. Elite Daily reached out to Kensington Palace for comment on Markle's latest comments, but did not hear back by the time of publication.

Markle's latest bone to pick is with an altogether unoffensive set of photos the royal family is including in its Christmas card this year. The photos, released by Kensington Palace and Clarence House, feature a photo of Prince Charles and Camilla, Duchess of Cornwall, William and Kate with their three kiddos, and a photo of Harry and Meghan at their wedding in May.

The black-and-white photo of Harry and Meghan shows them in their reception garb, looking off into the distance as fireworks are going off outside of Frogmore House where their wedding reception was held. Their arms are intertwined sweetly in the photo, and it really is just a gorgeous shot. You'd think there would be nothing offensive about it, but according to Samantha Markle, it disrespects the spirit of Christmas. Y'all, I wish I was kidding.

"Interesting that the Duke and Duchess of Sussex have their backs turned," she tweeted on Dec. 14, according to screenshots captured by users with access to Markle's private Twitter account. "Is this towards the world or just the Ragland and Markle family? It's a bit sad. Face the Christmas spirit." You hear that, Meghan and Harry?! The power of Christmas compels you to turn around and face it!!

This is... the funniest thing I have ever heard coming from Samantha Markle.

The photo is such a non-issue that Markle had to find something as innocuous as Meghan's back to pick a fight with.

And of course, she didn't stop with that tweet. Markle, feeling the need to explain why it's rude to show your back on a Christmas card, kept on tweeting. "It's incredibly rude to turn your back in a Christmas photo that is meant to share warmth and good wishes with the world," she continued, according to E! News. "Those. that criticize me for pointing out the truth, need to get that brown stuff off their noses. I hear the worlds smallest violin playing."

"Turn your backs to people on a Christmas card is rude," she continued. "If you want to be private you don't do it on a Christmas card but the world sees. That's like saying merry Christmas look at my butt." Y'all, I cannot with this. And I especially can't deal with Markle theorizing that the photo of Harry and Meghan was chosen specifically to insult both the Markle and Ragland families (Meghan's mother's side).

First of all, the Duchess of Sussex has a very close relationship to her mother, Doria Ragland, so the idea that she would try and insult her in a Christmas card is laughable.

Second, there is literally nothing offensive about these photos! (Side note: how heckin' cute is Louis?)

Normally, seeing new comments from Samantha Markle annoys the hell out of me. But these tweets gave me a good laugh on this fine Monday, so I'm going to thank her this time around. What a time.

More like this
Meghan Markle & Prince Harry's Beef With The British Tabloids, Explained
By Brandy Robidoux
Meghan Markle's Wreath For Prince Philip's Funeral Was Full Of Meaning
By Cianna Garrison
Meghan & Harry's Statement About Prince Philip's Death Is Simple, But Moving
By Sydney N. Sweeney
Stay up to date