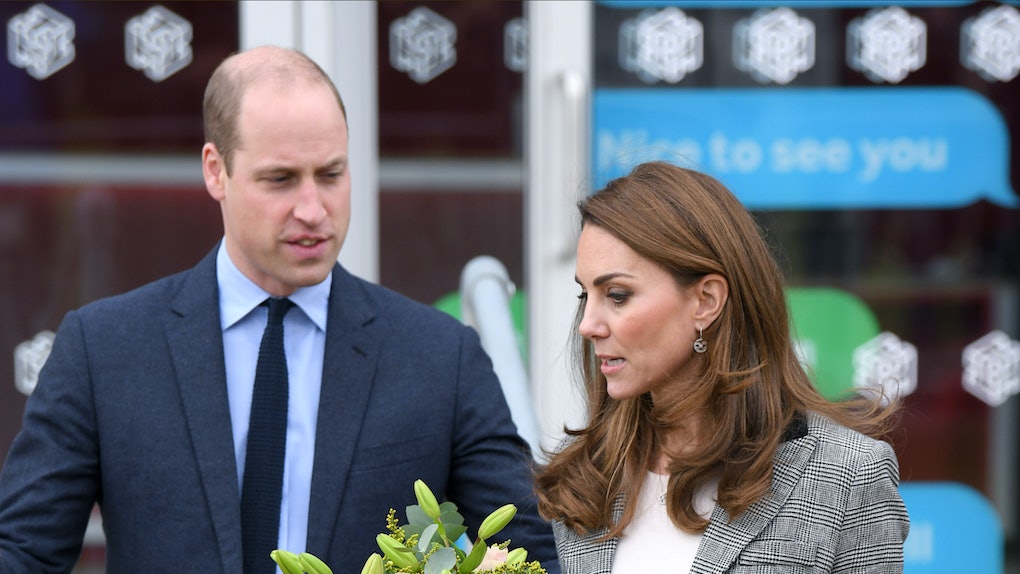 This Video Of Prince William Rubbing Kate Middleton's Back Is Everything

It's not exactly rated R, but this video of Prince William rubbing Kate Middleton's back on Nov. 12 is pretty much as racy as it gets for the Duke and Duchess of Cambridge. The couple hardly ever shows any sort of PDA in public, but one astute Daily Mail reporter managed to snag a video of Will giving Kate a cute little back rub as they arrived at Shout's Crisis Volunteer celebration event at Troubadour White City Theatre on Nov. 12. A quick little back rub may seem like no biggie to the untrained non-royal eye, but within the royal family it's actually reportedly a pretty friggin' huge deal.

You see, the royal family reportedly has an unwritten "no PDA" rule that has been put into place by Queen Elizabeth. OK, to be clear it reportedly isn't so much a hard and fast rule, as it is a precedent she's reportedly chosen to set with her husband, Prince Philip. This little reported unwritten rule first made waves with the media when Harry and Meghan shocked British fans by publicly holding hands (gasp!) on multiple occasions.

While Meghan and Harry have obviously decided to throw the reported unwritten "no PDA" rule out the window, William and Kate have mostly stuck to it (though there have been a few exceptions over their near decade of marriage). That's why the world was majorly amped to see them showing this super rare PDA moment:

Just can't get enough of the video? Here, let me further delight you with this picture of them on their way out of the event that I may or may not be saving to my desktop and also printing out to hang in my living room:

Obvi William touching Kate's back for, like, a millisecond is nothing compared to your friend shoving her tongue down her boyfriend's throat in the middle of a crowded bar, but the point is that in the world of the royals this is reportedly a huge deal.

It's especially a huge deal for this particular couple because they tend to keep the PDA to a major minimum. There's definitely no need for the royal couple to force themselves to show more PDA if they're uncomfortable with it but, for the sake of the people, I sure hope they do.