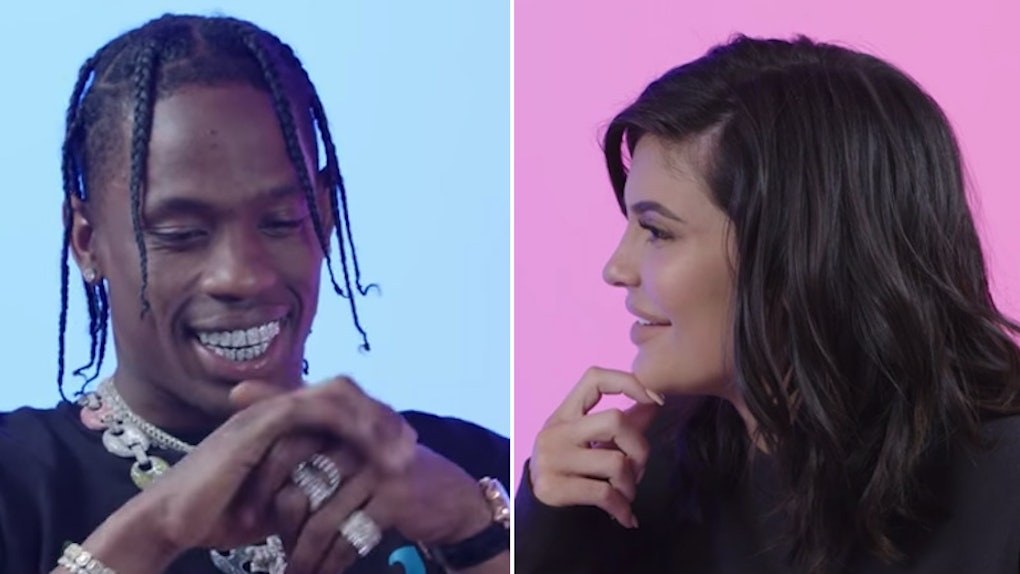 Wait a second. Something is happening to me. Do I suddenly love Kylie Jenner and Travis Scott together? Admittedly, I haven't been able to put my finger on their dynamic. It hasn't been clear to me what their whole "relationship vibe" has been up until now. I've only known it involves lots of diamond jewelry and mystery. Now that GQ released a video of Kylie Jenner quizzing Travis Scott on how well he knows her, I'm suddenly changing my tune. They're adorable together. Easy-breezy. Comfortable. Ya know, all the things you would want out of your own relationship. Guess I feel like a big ol' hater now, don't I?

Jenner and Scott's GQ feature marks their first cover photoshoot together and the first joint interview I've personally read. The pictures are probably more of what their fans expect — lots of glam, expensive clothing, moodiness from Scott and sultriness from Jenner. Yada, yada. The interview is interesting enough. They discuss the "Kardashian Curse" (which suggests any man who dates a Kardashian/Jenner will quickly fall to some sort of personal, professional, and/or public demise), plus how and why they value privacy in their relationship. Honestly, the most fascinating stuff comes out of the video.

Jenner and Scott play a game called "The Kylie Quiz" which is basically a series of questions designed to find out how much Scott knows about her. While the questions and answers are fun and playful, the real joy comes from watching their interaction together. Jenner and Scott high-five, fist bump, and pick on each other like two best buds might in a totally normal situation. You almost forget she's about to be a billionaire and that he's Kanye West's protégé.

The truth is, Scott totally crushes the quiz. He scores 20 out of 23, nailing every question except for the name of Kylie's dogs (Norman, Bambi, Harley, and Rosy), her definitive number of tattoos (five-ish?), and her parent's birth names (Kristen and William, just fyi). Beyond that, he's flawless.

Anyone in a serious relationship knows one of the defining moments in your romance is when your partner learns your pizza order. In Jenner's case, Scott meticulously explains she likes "pepperoni pizza with a little bit of oregano and salt and pepper" from MOD Pizza. The answer earned him a hive-five and fist bump. I know it sounds cheesy (HA! A PIZZA JOKE!) but just watch. You'll have fun.

They're normal together, right? Almost like it could be you and your partner, like, if you were a professional rap artist with diamond teeth and your partner made $900 million selling makeup. Close enough.

At the end of the video, Jenner affectionately sits on Scott's lap and coos, "You did really good. I love you."

If I can be the most real with you guys, I think I love him too? Life is weird.