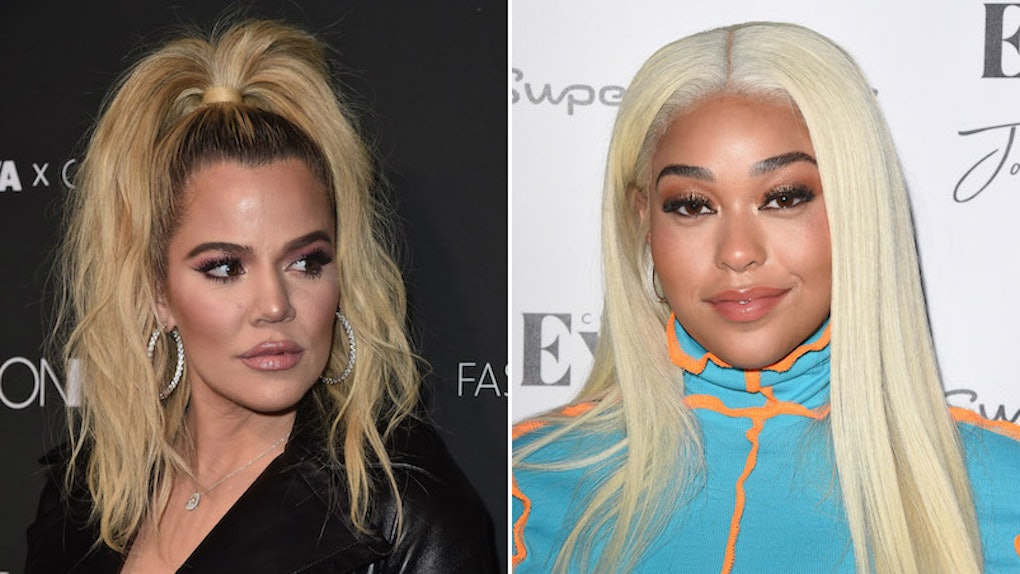 Oh, God. Oh no. I can't look. (Just kidding, yes I can.) But still, this video of Khloé Kardashian praising Jordyn Woods before all of the drama went down with Tristan Thompson is so awkward. Now that we know Kardashian and Thompson's relationship is kaput and Woods remains exiled from the famous family, seeing the two enjoy a meal together and celebrate one another on Keeping Up With the Kardashians just feels... kind of... ugh.

During the week of Valentine's Day 2019, Thompson kissed Woods after a night of partying, according to Woods' Red Table Talk account of the night.

Thompson was reportedly in town to celebrate the romantic holiday with Kardashian, who was still trying to save their relationship after videos of Thompson seemingly kissing other women emerged online as she was going into labor with their daughter, True. That story, in an of itself, was dramatic enough. However, things spiraled out of control a second time when reports surfaced regarding Thompson cheating on Kardashian again, but this time with Woods. Elite Daily previously reached out to Woods, Thompson, and Kardashian's teams for comment on the report but did not hear back by the time of publication.

According to reports, Kardashian called things off with Thompson the moment she found out something had happened between him and Woods. Later, Woods would go on to tell Jada Pinkett Smith on her show Red Table Talk that Thompson did kiss her on her way out of his home in the wee hours of the morning. Woods even copped to leaving that part out when she described the night's details to Kardashian and Kylie Jenner the next day — but only because she didn't want to hurt Kardashian.

While this is all common knowledge now, the current season of Keeping Up With The Kardashians is still catching up to real time. In the episode that is scheduled to air on Sunday, May 12, Jenner throws a party to celebrate her and Woods' Kylie Cosmetics makeup collaboration. As seen in the KUWTK clip, Kardashian raises her glass to make a toast. In her speech, she congratulates Jenner on all of her success and thanks her for including not only herself but also her sister Kourtney and of course, and Woods in her work. When it comes time to speak about Woods, Kardashian states:

And, Jordyn, for you to be turning 21 — I've known you forever. And, I'm so proud of you and the woman that you have grown into and that you're growing into. And to see you guys just stick together and be best friends through thick and thin, it's such a blessing. Congratulations on everything and this will be a huge success!

Ironically enough, after the reports broke about Woods and Thompson, Jenner's Lip Kit in the shade "Jordy" went on mega sale. Within 48 hours, prices were dashed online and fans could purchase the kit for half price. You can still find their collab collection KYLIE X JORDAN online, but it looks like Jenner isn't rushing to restock any items that have sold out.

Inevitably, production on KUWTK will catch up to Valentine's Day 2019 and fans will have a closer look at what really went down. No one look away yet.