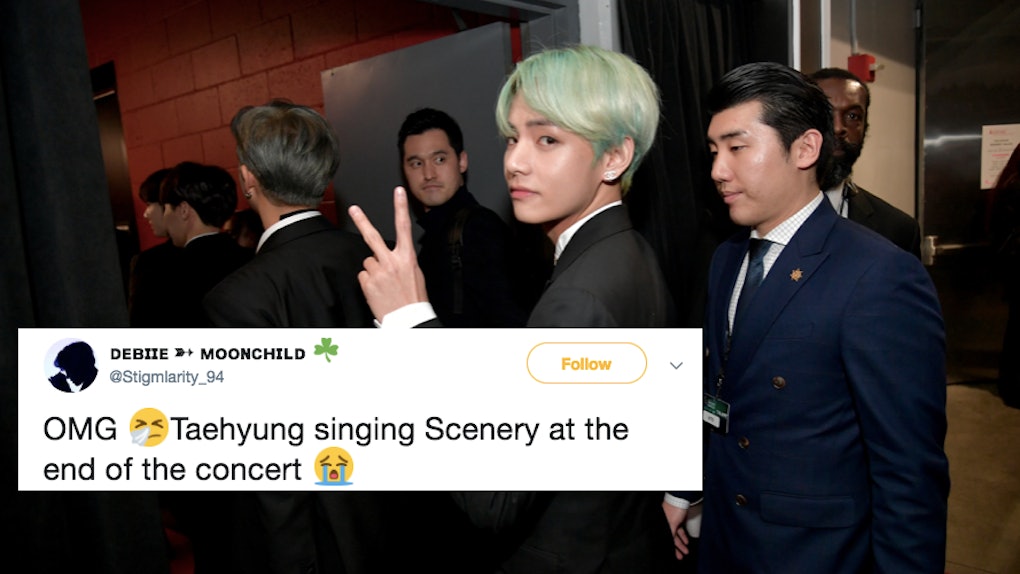 Every now and then, a BTS member steps slightly out on his own to release a solo song. Sometimes, if fans are lucky, they'll also get a live performance of the song at a BTS concert. Well, that's exactly what happened on Saturday night, Feb. 16, at a BTS show in Japan. Don't worry if you weren't there, because this video of BTS' V singing "Scenery" live in Fukuoka will give you an inside look at V's performance of his new song — and it will make you feel so many emotions.

On Sunday morning, Twitter user @AnnieLuvsBTS1 posted a video of BTS' V, aka, Taehyung, performing "Scenery" live on stage. "Scenery," of course, is V's solo song that he released back at the end of January. The tweet was captioned:

Taehyung’s live version of Scenery is everything!! Singing it a cappella with the audience clapping along, and the members watching on affectionately. What an absolutely beautiful moment!!

In the video, V is standing alone on stage with no backup vocalists or instruments, and he starts singing "Scenery" into the mic. The audience occasionally cheers until eventually everyone starts clapping along. In a second tweet, @AnnieLuvsBTS1 posted another video and wrote, "I just can’t get over how gorgeous Tae’s voice sounds. It’s raw and tender and hits you right in the heart. You can feel every emotion he put into the lyrics he wrote. I’m beyond amazed."

But don't take someone else's word for it, check out footage of V singing "Scenery" for yourself.

Are you OK after watching that? I don't know about you, but I need a minute to recover from all. The. Feels. Of course, I love when BTS jams out together, but something about this a capella solo session is a very welcome slowdown at the end of a super hype concert.

Two weeks prior to the song's release, V told fans at the 28th Seoul Music Awards that he had a "gift" for them. It turned out the gift was "Scenery," V's self-composed song which he released on Jan. 30, 2019. According to Korean pop culture site Soompi, V wrote the lyrics, composed the song, and also took the photo for the cover. Just over two weeks after V released "Scenery," the song surpassed 100 million streams on Soundcloud and became the fastest track to reach that many plays in the history of the streaming service. Let's be real, if anyone can set a record, it's the BTS ARMY.

Many fans shared videos of V singing "Scenery" and their reactions to the surprise performance in Fukuoka. Twitter user @jeen4tae wrote, "Taehyung sang SCENERY I cant believed he granted our wish! And his vocal is amazing while singing it in acapella! Hail to the Vocal King!"

Need more proof this song was all about the ~feels~? People got freaking goosebumps. Can you blame them, though?

People were also very much here for the BTS brotherly love.

"Scenery" is almost five minutes long and produced by BTS producer DOCKSKIM. Give it a listen below if you haven't already heard it — you wont regret it.

If you don't speak Korean, the Twitter account @cafe_army provides a translation of the lyrics for the English-speaking BTS ARMY. Be warned, though, the lyrics may get you super in your feelings, like the following:

V isn't the first member of BTS to release a solo track. Just recently, Jimin released his first solo single "Promise" at the end of December, which surpassed one million streams on Soundcloud within the first 54 minutes of its release and also went on to beat Drake's record for most-streamed track within the first 24 hours of its release on SoundCloud. Ain't no fanbase like a BTS fanbase.

More like this
I Tried Singing While Running Like Miley Cyrus & OMG, My Lungs
By Rachel Varina
Olivia Rodrigo's Reaction To Getting Her First Parking Ticket Was Priceless
By Brandy Robidoux
21 Taylor Swift's 'Fearless' Lyrics For Throwback Pics That Belong On The 'Gram
By Rachel Chapman
Stay up to date