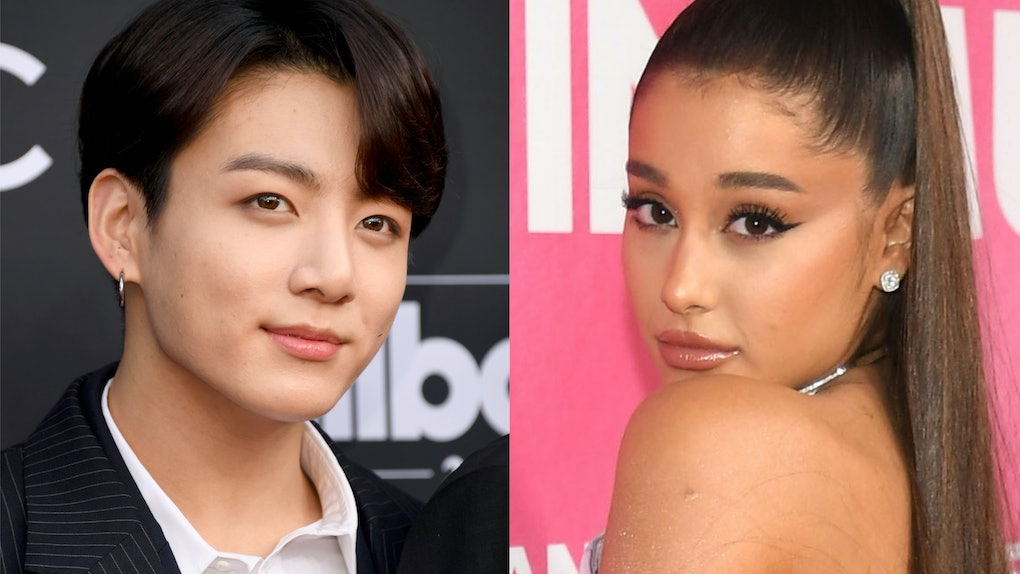 After performing two back-to-back concerts at the Rose Bowl in Los Angeles on May 4 and 5, BTS has been spending some free time off in the City of Angels before their next two Love Yourself: Speak Yourself tour stops. As per their latest tweets, Jin spent a fun day at Six Flags, J-Hope and RM visited art exhibitions, and Suga went to see Avengers: Endgame. The BTS ARMY are breathing a sigh of relief knowing that their guys have been enjoying some time off in America. While most of the BTS guys have been spending their breaks away from the music scene, it looks like Jungkook just can't get enough of it. He decided to attend Ariana Grande's concert in Los Angeles on May 6. Does this man ever get tired? Apparently not. (It's Jeon Jungkook after all). This video of BTS' Jungkook at Ariana Grande's LA concert is making me feel all kinds of emotions, especially with how much fun he seemed to be having at the show.

On May 6, Ariana Grande performed at the Staples Center as part of her Sweetener tour and her manager, Scooter Braun, was in the crowd cheering her on. Throughout the night, Braun recorded tons of videos and shared them on his Instagram Story. During Grande's performance of "Goodnight and Go," Braun panned around and showed a glimpse of Jungkook enjoying the concert. It's a blink-and-you'll-miss-it kind of moment, but it's no doubt Jungkook of BTS. He was wearing an all-black outfit and his trademark bucket hat. Yep, that's definitely Jungkook.

Watch the video below:

One fan also captured Jungkook bopping to Grande's "Bloodline." Okay, that man has taste, because "Bloodline" is one of the best tracks on Grande's Thank U, Next album.

I don't know about you, but it seemed like Jungkook really enjoyed the concert and was totally inspired by Ariana Grande's performance. After the show, Jungkook shared his thoughts about it on Twitter in all English (since, as ARMYS know, he's been studying). He continued, "I felt and learned a lot after seeing her stage. I am really challenged by her stage and will try harder!"

Even while attending concerts, Jungkook is always thinking about the BTS ARMY and how he could put on a better show for them. Someone grab my tissues because this boy is too much to handle.

Jungkook shouldn't have to worry because his recent performances for BTS' Love Yourself: Speak Yourself tour have reached new heights — literally. For past performances of his song "Euphoria," Jungkook would just do choreography, and while that was amazing already, the 21-year-old singer has kicked it up a notch by taking his performance into the air, making him look like a literal angel to ARMYs watching down below. Don't know what I mean?

Watch the video below:

Jungkook was meant for the stage (or in this case, meant to fly off it?). Maybe that's why he can't seem to stay away from the concert atmosphere for long. With him attending Ariana Grande's LA concert, I think it's safe to say that Jungkook is officially an Arianator (if stanning her whenever he got the chance in the past didn't already make that perfectly clear, I mean. Remember the 2018 BBMAs?). Now, my one question is, did Jungkook meet Ariana Grande? Neither has posted about an interaction just yet, but my ARMY and Arianator heart will wait and hope for the best.

More like this
Demi Lovato Called Out A Froyo Shop For Promoting Dieting Culture, & It's Getting Mixed Reactions
By Brandy Robidoux
These BTS x McDonald's Meal Memes Will Crack ARMYs Up
By Michele Mendez
Chris Evans' Response To Lizzo's Drunk DM Was Absolutely EVERYTHING
By Michele Mendez
Stay up to date