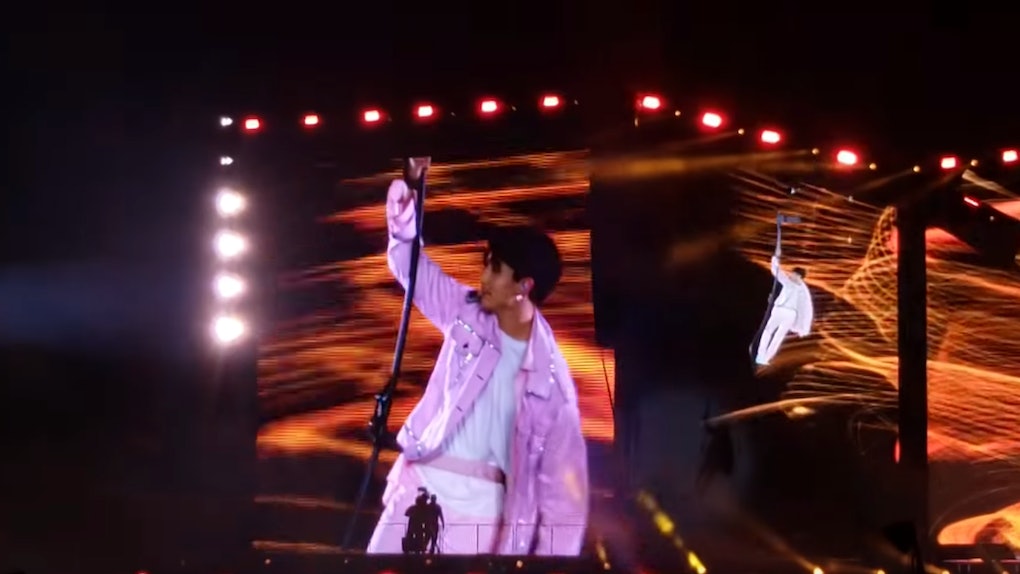 BTS is back on tour, y'all, and it's officially time to freak out. The world-famous K-Pop group recently kicked off their Love Yourself: Speak Yourself tour in Los Angeles, and RM, Jin, Suga, J-Hope, Jimin, V, and Jungkook performed their hearts out. In addition to their traditional choreography, BTS showcased some pretty rad moves that had everyone in the packed stadium at the edge of their seats. This video of BTS' Jungkook performing "Euphoria" in LA features him flying across the stage like an actual angel, and you have to watch the video to see what I mean.

On Saturday, May 4, BTS performed for a sold out audience at the Rose Bowl Stadium in Pasadena, California. At the beginning of the group's 24-song setlist, nestled between "Trivia: Just Dance" and "Best of Me," the boys performed the song "Euphoria" off their 2018 album, Love Yourself: Answer. The boys started the performance off in regular BTS style — great vocals, killer dance moves, and gorgeous on-stage effects. For the first minute and a half, it seemed like it was just going to be a regular performance, that is, until something magical happened.

Just over two minutes in, Jungkook, who had been standing on some kind of pulley contraption, was hoisted up into the air and started fully flying like an angel. Not only was it visually incredible to see one BTS member soaring above the stage, but it was also striking because Jungkook was the only member sporting an all-pink look, while the rest of the boys were wearing blue and white, making him stand out all the more and appearing angelic beyond belief.

TBH, you have to see it to believe it.

Needless to say, Los Angeles ARMYs freaked out in the best way possible as Jungkook flew and sang perfectly at the same time. Jungkook remained airborne for an entire minute, flying atop the stage and singing as if it were totally NBD. About a minute in, he decended back down toward the stage while still hovering a little, belted out a few lines, and ascended back up towards the heavens while singing, "You are the cause of my euphoria." No, Jungkook, you're the cause of my euphoria.

Understandably, ARMYs on Twitter had a lot to say about the impressive display. One Twitter user, @stxrryjeon, wrote "[J]eon [J]ungkook was only 21 when he said f*ck gravity and flew over a full stadium while perfectly singing euphoria." Another Twitter user, @jinjoonies wrote, "[I] cant stop thinking about how [J]ungkook is literally our angel and the way he’s flying over everyone while singing euphoria and looking at all the armys and trying to make eye contact with every single one of them :( mayhaps im crying." It's OK, @jinjoonies, I also cried a little.

After flying around for a few minutes, Jungkook finally came down to earth and effortlessly rejoined the group dancing on stage just as the song was ending, making the "Euphoria" performance one of the most noteworthy ones of the whole show for ARMYs in the audience and on-lookers all over the world. Honestly, May 4 should just be dubbed Jungkook day.

Since this Los Angeles performance was the first show of the tour, it remains to be seen if other audiences will get to witness the angelic goodness that is Jungkook soaring over head. I definitely plan to stay tuned to see what else BTS has in store for concertgoers.

More like this
Olivia Rodrigo's Reaction To Getting Her First Parking Ticket Was Priceless
By Brandy Robidoux
Demi Lovato Said She Won't Share Details About Her Recovery Again After Being Criticized
By Brandy Robidoux
Who Plays Jamie In 'Cruel Summer'? You've Seen Froy Gutierrez Before
By Rachel Varina
Stay up to date