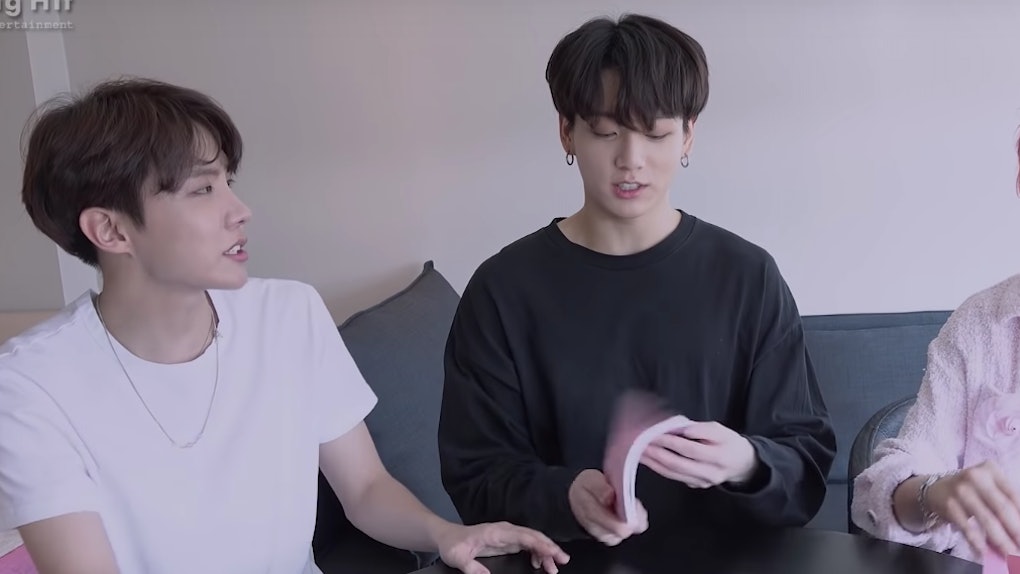 The Video Of BTS' Jimin, Jungkook, & J-Hope Unboxing The 'MOTS: Persona' Album Is So Cute

Just when the world thought the BTS boys simply couldn't get any cuter, they proved everyone wrong once again. A recent official BTS YouTube video shows three members of the world-famous K-Pop group unboxing their newest album, Map of the Soul: Persona, and it looks like they had a heck of a good time doing it. This video of BTS' Jimin, Jungkook, and J-Hope unboxing the MOTS: Persona album is almost too cute for words.

On May 4, 2019, the official BTS YouTube channel, BANGTAN TV, posted a video called "'MAP OF THE SOUL : PERSONA' Album Unboxing," featuring three members of BTS — Jimin, Jungkook, and J-Hope — opening packages containing the physical album. The video starts off with the three opening up the box, ripping open the bubble wrap, and taking a look at the various goodies inside. During the unboxing, fans see that the package doesn't only come with a physical CD, but it also contains a photo book featuring some of the album's concept photos, framed images of various BTS members, and full-sized posters for dreamily staring at all day (ahem, I mean using them to decorate bedroom walls).

The boys speak in Korean throughout the video, but if you don't speak Korean I can guarantee you it's still a delight to watch them chat and laugh through the unboxing.

If you do want to know what Jimin, Junkook, and J-Hope are saying to each other throughout the process, I have good news. Twitter account @cafe_army provides Korean-English translations for BTS content, and it highlighted various parts of the 17-minute unboxing video that demand translation. For example, there's a moment in the video where the boys are looking through the photo book and see a picture of V who they proceed to call, per the account's translation from Korean to Englush, "really good looking" and "most handsome man." There's honestly nothing cuter than BTS members gassing up their bandmates.

At the beginning of the unboxing video the boys even joked about being "big" BTS fans, saying things like, "I’m a really big fan too so I even stole their outfit!" That was followed by, "[W]ow, really? [W]ow i’m so jealous!" as if they themselves weren't BTS but were just like all the other BTS-loving ARMYs out there. LOL!

My favorite moment of the whole unboxing video is when the boys sing about grapes. Yep, you read that right, at one point in the vide they join in on a group harmony singing "I want to eat grapes" to the melody of the song "Epiphany" off the album Love Yourself: Answer.

While watching BTS perform, compete in music shows, and answer questions in interviews on late night shows is a lot of fun, it's equally as enjoyable to watch the boys be totally natural and themselves on camera as well. Videos like this unboxing help ARMYs see the real BTS behind the glitz and the glam, and their realness is obvious thanks to their casual demeanor in the video. Seriously, I could watch them laugh at each other's jokes all day.

Hopefully fans get more videos like this one, because I think everyone enjoys a behind-the-scenes look into the lives of RM, Jin, Suga, J-Hope, Jimin, V and Jungkook.