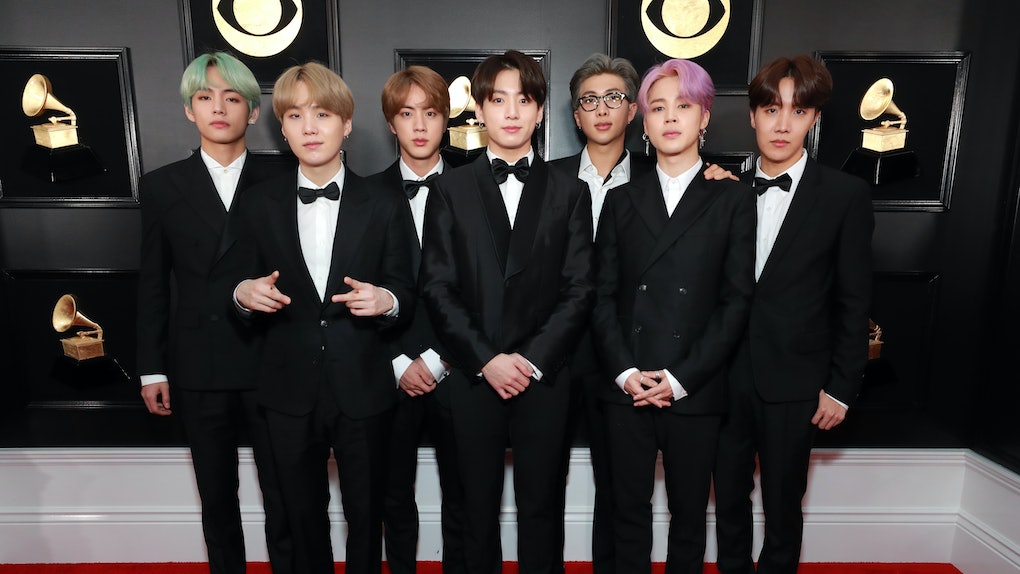 BTS' 'Map Of The Soul: Persona' Concept Photos Give A Peek Into Their Morning Routines

Big news, BTS fans. The K-pop group just released a set of concept photos for their upcoming album, and you'll definitely want to see these ASAP. BTS' Map of The Soul: Persona concept photos give fans a sneak peak into the boys' morning routines. Basically, get ready to both swoon and amp up your excitement levels for their new album.

On Sunday, March 31, BTS' management company Big Hit Entertainment posted two sets of concept photos for the group's highly anticipated new album, Map of the Soul: Persona. The first set, shared on the official Big Hit Twitter account, features rose-toned group selfies of RM, Jin, Suga, J-Hope, V, Jimin, and Jungkook. "Concept Photo version 1," as they are captioned, includes some serious photos, some silly photos, and even a blurry image or two where the boys are clearly having so much fun.

In addition to group selfies, the first set of pics also includes individual photos of each member posing in a unique way with different props, like a vintage camera, cookies, a selfie stick, a balloon, and even confetti. The overall theme of the first batch of photos seems to be lighthearted, fun, and carefree — possibly illustrating a party-like album to come.

OK, now for the more personal phots that show the boys on a bathroom set. "Concept Photo version 2" maintains the overall rose gold look, but it shows the boys from a different perspective.

In this set, each member of the K-pop group is shown posing in front of a bathroom mirror practicing his morning routine, like fixing up a hairstyle, getting dressed, or putting in earrings. It's a different side of BTS for ARMYs to see, especially since they're usually seen just killin' it on stage.

Each photo in the second set features one big color photo and multiple smaller black and white frames, and though the boys are posed more seriously in the second group of photos than the first, both sets of concept photos maintain the same lighthearted tone.

But don't take my word for it! Check out these sweet concept photos for yourself.

You guys, there's even a group bathroom mirror photo, and if that's not the best thing you see today, then I don't know what is.

BTS fans took to Twitter after the release of the concept photos to speculate about how the photos might relate to the new album. Twitter user @Ali_WMK317 wrote, "Both sets of concept photos (highlight reel & getting ready) kind of echo back to the idea of a Persona; mirror, putting on your look for the outside world, your presentation, etc."

Another Twitter user, @btsbeangifs, referenced the second set and wrote, "Let's talk about the washing machine! They actually took the DNA concept pictures in a laundromat I have a theory! The LY journey follows a similar 'color' as the Map of the Soul. 'Her' was about bliss in denial. Persona is about the 'fake' face you put out to the world."

Why are here so many photos? @SWEETDANGER0309 has thoughts, sharing, "That’s why there are so many different pictures of BTS in their concept photos, it’s representing BTS’ different personas they are playing bEHIND THE MASK !!!"

Map of the Soul: Persona is scheduled for release on April 12, 2019. According to a press release from Big Hit Entertainment, the album accumulated 2.5 million pre-orders in just five days, because the BTS ARMY truly is the most loyal and loving fan group in the world. If the concept photos weren't enough and you're just itching for more Map of the Soul: Persona, you might be excited to hear that Big Hit Entertainment released a trailer for the album featuring RM being, well... really hot.

Let the countdown to April 12 begin!