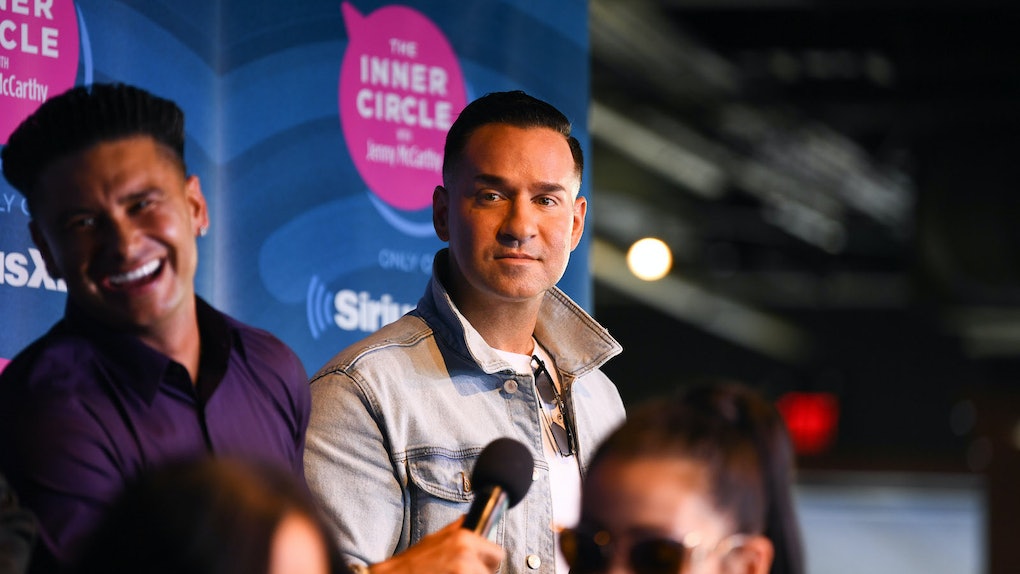 Prison life sounds like the exact opposite of a good time, but apparently, Mike Sorrentino's current situation is not so bad. The Jersey Shore star is approaching the three-month mark in prison after pleading guilty to charges of tax evasion, and his castmate and friend Nicole "Snooki" Polizzi just filled fans in on how The Situation is holding up behind bars. Let's just say that Snooki's update about The Situation's prison life is not what you probably expected.

Since we have not seen the Jersey Shore gang a lot recently, Snooki gave some updates on what everyone is up to right now in an interview with E! News. The biggest question mark of the group is The Situation, who surrendered himself to prison on Jan. 15 after pleading guilty to a charge of tax evasion. The Situation was sentenced to eight months in prison, and is scheduled to be released on Sept. 13. Fans were curious about what prison might be like for The Situation, but Snooki revealed that he is "having the time of his life." She said that she is in regular contact with him via email, and he seems to be making the most of his time in jail:

Mike's having the time of his life. It's like he's in a senior home, he's playing Bingo, he's helping people recover in jail. We all talk to him through an email, so I talk to him like once a week. He's in the gym a lot, so he's probably gonna come out ripped. You know, he's not gonna be BDS anymore — Big Daddy Sitch — he's gonna have his, probably, six-pack again. But he's doing... he's doing good in there.

It sounds like The Situation's sober and laid-back lifestyle is treating him well even behind bars. Although the reality star first became famous as one of the most hot-headed and confrontational guidos on the original run of Jersey Shore, he shocked fans on last year's revival series Jersey Shore Family Vacation with his completely new persona. Rather than being the horned-up juicehead who was quick to start a screaming match, the new Mike Sorrentino is three years sober, happily married, and more interested in scarfing down junk food than getting involved in petty drama.

Although it sounds like The Situation is thriving in prison, the downside is that he will likely miss out on appearing in the upcoming third season of Jersey Shore Family Vacation. Snooki revealed that the cast is about to start filming Season 3 right now, but with The Situation in prison for the next five months, it seems impossible that he would be able to make an appearance in the new run of episodes.

But there is still a ton of drama to focus on in Season 3 without The Situation there. JWoww is going through a rocky divorce with her long-time husband Roger Mathews, which Snooki said she is handling very well. And although Ronnie's relationship with his baby mama Jen Harley has not made headlines recently, there is still a lot going on there that fans are curious about.

More like this
Are Olivia Lux & Utica Dating After 'Drag Race'? Olivia Gave An Update
By Dylan Kickham
Dan Levy's Quotes About The 'SNL' Note Tradition Clarify Who Really Started It
By Dylan Kickham
This Reported Update About HBO Max's 2021 'Friends' Reunion Is Great News
By Cianna Garrison
Stay up to date