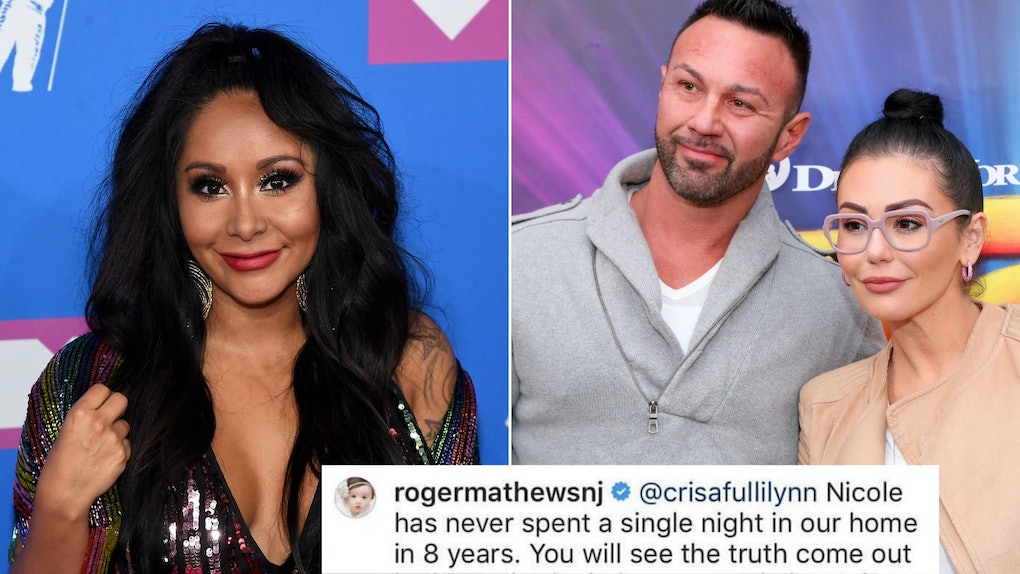 Jersey Shore Family Vacation may be packed with drama, but it is nothing compared to the intense soap opera going on in the personal lives of the cast members. On Friday, Jenni "JWoww" Farley's separation from her husband Roger Mathews took a dark turn when JWoww was reportedly granted a temporary restraining order against her husband following a private dispute. JWoww and Roger's teams previously declined Elite Daily's request for comment. That private dispute then became very public thanks to Mathews' constant Instagram posts, and Nicole "Snooki" Polizzi stepped in to defend her best friend. Now, Roger Mathews' comment on Snooki's Instagram about JWoww is taking this whole mess to a new level.

Following a wild, allegation-filled weekend between divorcing spouses JWoww and Roger, Snooki stepped in to defend JWoww by posting security camera footage of JWoww speaking to the police. On Thursday night, police officers reportedly visited the couple's home in response to a reported civil matter, and the visit ended with JWoww being awarded a restraining order, followed by the cops driving Roger to a separate location. Nobody was arrested during the event.

While in the police car early on Friday morning, Roger posted a video on Instagram alleging that the fight began over JWoww being unable to stay with their sick daughter due to work despite promising to do so earlier. In several follow-up videos, he went on to claim that JWoww was going out of her way to make sure he would not be able to see his children. JWoww herself has declined any public statements about the incident, but she did post a note from her team implying that Roger's multiple posts about the night are false and misleading:

Later on Friday, Dec. 14, Snooki posted footage from a security camera in JWoww's home in response to Roger's claims. Snooki's post claimed that JWoww fought for Roger to remain a part of their children's lives, and the video appears to show JWoww telling the police that Roger is "not a bad dad." Under the video, Snooki wrote that Roger is painting JWoww out to be someone she is not:

I've decided to post this video because Jenni's intentions were to never keep the kids from Roger. She is fighting for him to be in their lives and never once tried to take them away ... I know my sis and she is NOT the person Roger is painting her out to be. So congratulations, you gave him what he wants. Your attacks and bullying.

Elite Daily reached out to Snooki and Roger's teams for comment on this story. Roger has declined to comment, and Snooki's team did not respond by the time of publication.

Snooki's post caused one fan to comment that the reality star should stay out of the whole mess, a sentiment that Roger Mathews echoed in a comment of his own. Roger claimed that Snooki has not spent a night in his and JWoww's home for years, and alleged that she has "[skeletons] in her closet" that will come to light in the end. Elite Daily reached out to Snooki and Roger's teams for comment on this story. Roger declined to comment, and Snooki's team did not respond by the time of publication.

Back in September, JWoww filed for divorce from Roger Mathews after three years of marriage, citing irreconcilable differences. Elite Daily reached out to JWoww and Roger's teams at the time but did not hear back. The couple has two young children together, daughter Meilani and son Greyson. Shortly after the divorce filing was announced, Mathews posted an Instagram video stating that he intended to work to win JWoww back, and that the couple was attending marriage counseling to try to make things work.

Unfortunately, it looks like things have not been getting better between JWoww and her husband. Meanwhile, the second season of Jersey Shore Family Vacation just concluded airing last week, and MTV paired the season finale with the announcement that a third season has officially been picked up.