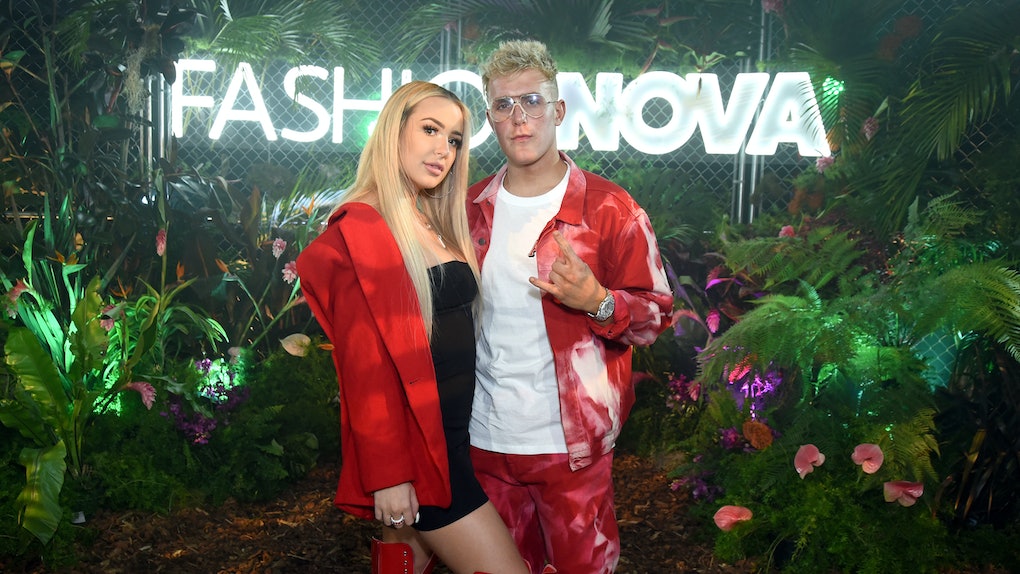 Love them or hate them, the nuptials of YouTube stars Tana Mongeau and Jake Paul may have been one of the biggest pop culture moments in 2019 so far. (I know, I know. But it's true.) If you're looking to do a timely Halloween costume, they're the perfect couple to look to for inspiration. I can't promise that a Tana Mongeau and Jake Paul Halloween couples costume will ever be quite as iconic as some other celebrity couple looks. However, I can promise that dressing up as these two is easier than you might think — even if you take on their epic wedding ensembles.

It's a tale as old as time: Boy buys girl a Mercedes Benz G-Wagen after two months of dating, boy proposes to girl three days later at her televised 21st birthday party, and then boy and girl get married a month later at a mall in Las Vegas. OK, not totally traditional, but neither is a costume inspired by the pair, and wouldn't you rather be original? If you want to wear the most 2019 costume ever, here's how you can put Mongeau and Paul's unforgettable wedding looks together without spending as much as Paul (maybe?) spent on Mongeau's engagement ring.

Some background on their wedding day: Mongeau and Paul tied the knot on July 28 and held their reception at a Sugar Factory in Las Vegas' The Fashion Show Mall. To say it went off without a hitch would be, well, incorrect. A fight broke out, their livestream didn't work, and the two left the reception separately, but what fun is a well-executed wedding anyway?

Luckily, Paul later posted a video from the big day on his YouTube page so that all those devastated about the faulty livestream could view the highlights. My personal favorite part of the day (besides Paul cutting the cake with a giant sword) had to be their top-notch formal wear, which you can recreate for Halloween (and even wear again for your own wedding day, if you're really into it).

Paul's outfit has a lot going on, so let's take it piece by piece. Rather than the usual black suit/white shirt combo, Paul reversed the classic look and, for good measure, added a white wide-brim hat and a black fanny pack (worn across the chest in true 2019 fashion). Here's what you'll need to get to replicate this iconic outfit:

Complete the look, add a pocket square, some dangling cross earrings, and a black umbrella to carry around with you.

Mongeau's look is less involved, but a little tricker to nail while staying within a reasonable budget. The YouTuber actually wore two separate dresses: a lacy Veronica gown from Glaudi by Johana Hernandez, and then later, the same designer's Cindy ball gown, which features a white sweetheart top and pink ruffled skirt. As actual wedding dresses are, you know, kind of pricy, I'd recommend this alternative to her second gown with these accessories:

Bonus points if you can find a black lapel microphone to pin to your top.

I can't say I'm totally convinced by this whole union, but here's what I do know: This Halloween costume idea is sure to earn the appreciation of pop culture enthusiasts everywhere. .