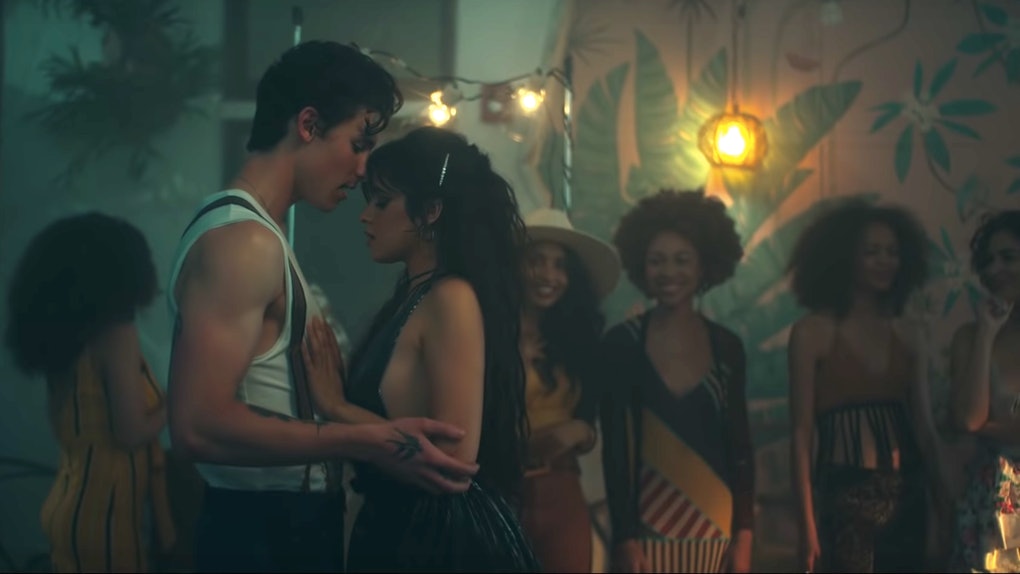 I know I'm not the only one who's watched the "Señorita" music video more times than I care to admit. I can't help it — it's hot as heck, and the only thing hotter than the sexual tension may just be all of the outfits. If you and your boo are looking to do a Shawn Mendes and Camila Cabello couples costume for Halloween 2019, the "Señorita video" is positively packed with inspiration, and the only question is: Which look are you going to go with?

While Mendes keeps it simple, several more outfit changes follow for Cabello — including a black fishnet dress, an oversized white sweater worn over a tank top, a gauzy white A-line dress, a floral tiered chiffon gown, and a white blouse with jean shorts — but my favorite look has to be her little black dress from the club when she and Mendes lock eyes as he's strumming the guitar.

Let me set the scene for you. Mendes is jamming in the club, looking muscular and gorgeous. Cabello is standing surrounded by her girlfriends. She and Mendes make eye contact, recognizing each other from the diner. Mendes takes her hand and leads her out onto the floor. They dance for an agonizingly short period of time and then, like Cinderella at midnight, Cabello rushes away from him out of the club. Before long, she's back in her waitress uniform. But for those precious few moments in the club, she and Mendes look like sheer perfection.

The jury is still out on whether these two are an IRL item. At Elle's Women in Music event on Sept. 6, Cabello told E! News, "I love him with all my heart and always have," in reference to Mendes. They've also been spotted canoodling just about everywhere and — oh, yeah — even posted a video of themselves making out on Instagram. Mendes has yet to comment on their relationship status, but together or not, there's no denying that there are some serious sparks flying in the "Señorita" video. I can't give any advice on how to get their incredible chemistry, but I can tell you how to recreate their outfits for Halloween.

The actual dress worn by Cabello in this scene is a Saint Laurent Metallic Cocktail Dress, which is going for a casual $1,590 at Barneys, so it's probably not in your Halloween costume budget. Luckily, you can get a copycat cocktail dress with the same plunging V-neck, halter straps, and metallic detailing for a whole lot less. Pair this look-a-like little black dress with these accessories to get Cabello's look.

Complete the look by fashioning a necklace out of a black shoelace, putting on a pair of hoop earrings, giving yourself a smoky eye, and voilà — you're a walking sex goddess!

Mendes' look during this scene is a lot simpler and much easier to replicate than Cabello's. All you need is a white tank top, brown suspenders, and a pair of blue pants, and you'll totally look the part.

If you really want to commit, you can carry around a guitar and attempt to recreate all of Mendes' visible tattoos as well.

I can't say for sure that these two are an item, but I can say that recreating their "Señorita" looks will allow you and your SO to have your sexiest Halloween yet.