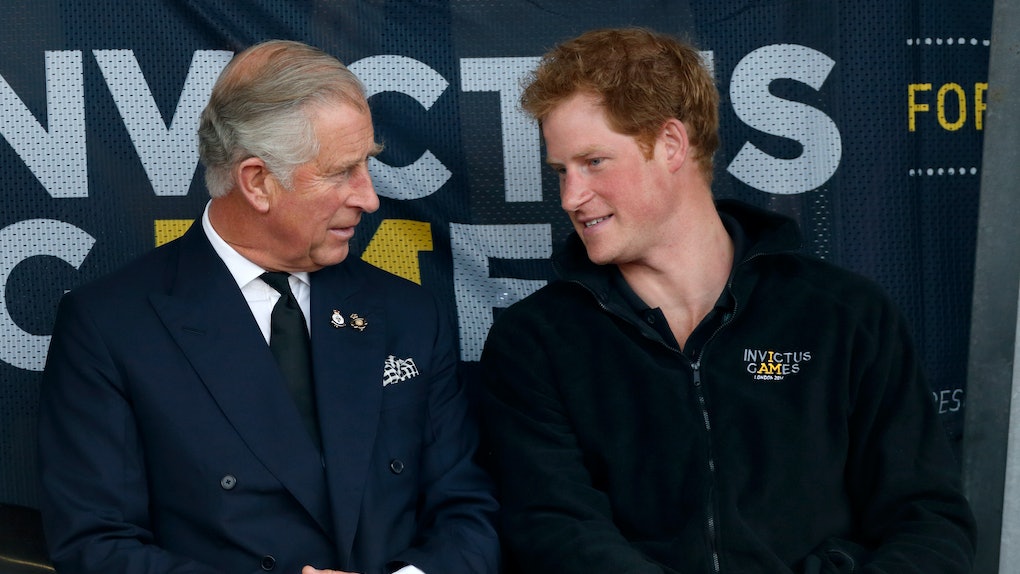 This Prince Harry & Charles Relationship Update Is Not Encouraging

Prince Harry made his way across the pond for the late Prince Philip's funeral on April 17, and, at the funeral, things seemed amicable enough between him and the rest of the royal family. However, tensions are apparently still high behind the scenes, a new report from Page Six claims, and Harry didn't speak to a number of his family members one-on-one. As it turns out, things are reportedly still rocky between Harry and his dad. This Prince Harry and Charles relationship update is disappointing, y'all. Elite Daily has reached out to reps for the Sussexes and Buckingham Palace for comment, but did not hear back by time of publication.

Philip's funeral was a televised event, but on-camera interactions between Harry, his father, and his brother William were few and far between. While much of that dynamic could be attributed to strict safety measures amid the coronavirus pandemic, the report from Page Six claimed that, even behind the scenes, the royal family was unwilling to have in-depth conversations with Harry because they don't "trust him."

A source who spoke with the outlet revealed William and Charles wouldn't speak to Harry without a witness present out of fear he would leak their conversations. (To be fair, plenty of details about Harry and Meghan have been leaked to newspapers, so it's not a one-sided phenomenon.) Additionally, the site reported previous talks ahead of the funeral service between Harry and his family were "not productive."

Charles and William didn't completely brush Harry off, though. The report stated the three of them had a brief 'clear-the-air talk' at Frogmore Cottage," the insider added.

Harry's decision to relinquish his royal duties drove a wedge between him and his family, and the distance became literal when he revealed he was settling down in California long term in August 2020 after buying a house with his wife, Duchess Meghan Markle. Then, things turned especially sour after his tell-all interview with Oprah Winfrey aired this past March, where he accused the royal institution of not doing enough to protect Meghan from racist attacks, and claimed one family member expressed concern over little Archie's skin tone. After all of the headlines about what's really been going down between the royals, they're intent on keeping the details private.

“They are being protective of one another — no one wants anything private being reported back to anyone," a royal source told Page Six. "Nobody wants anything out there. And no one can pretend to know what was said on Saturday — it was just immediate family after the service.”

As sweet as it would be to see Harry patch things up with his father, it sounds like this reconciliation is going to take some time.

More like this
Matt James' Update On His Relationship With Rachael Kirkconnell Is Surprising
By Candice Jalili
Meghan Markle's 'The Bench' Children's Book Was Inspired By Prince Harry In The Sweetest Way
By Sydney N. Sweeney
Is James Charles Single? Here's What To Know About The Sister Squad Star's Love Life
By Tara Martinez
Stay up to date