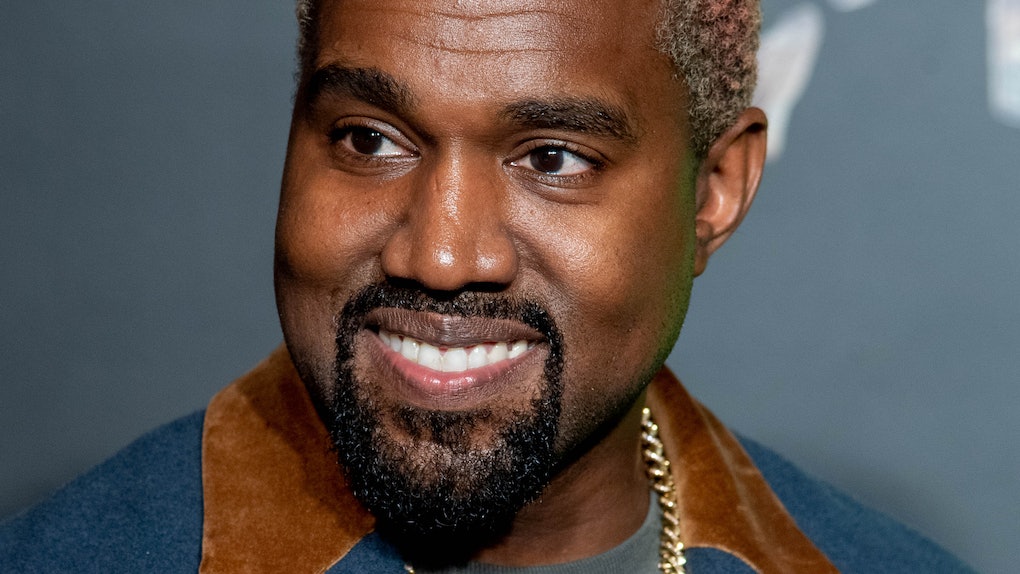 Here's a dynamic I never think about: What's the relationship like between Rob Kardashian and Kanye West? I'm so busy focused on all of the women in the Kardashian/Jenner clan, I almost forgot that the man who invented the line "I just talked to Jesus, he said: what up Yeezus” is the brother-in-law of the guy who sells socks with the word "DILF" printed on the bottom for $15. However, the photo of Kanye West with Dream Kardashian reminded me of this special dynamic and now I'm loving the idea of Rob and Ye literally bro-ing out together.

According to reports, Rob and Kanye spent Father's Day together along with their families. In the photo, little Dream is nuzzled up next to Uncle Ye with a giant smile on her face. West is, ya know, doing his best to smile. He looks happy-ish, which is good enough for Rob. Rob shared the photo on Instagram with the caption, "Best picture ever," and tagged his sis, Kim. She then re-shared the photo on her own Twitter feed with the hashtag #UncleYe. (Do I smell a new album title coming on or what?)

It's unclear if the photo was taken during their Father's Day celebrations, but for our purposes, let's just assume this was before the group enjoyed a scrumptious Father's Day feast.

Peep the little one here:

Rob co-parents Dream with his ex-girlfriend Blac Chyna who has, for all intents and purposes, disappeared from the Kardashians' public persona. For a while there, when Rob and Chyna were in the process of breaking up, things were incredibly messy. Today, Dream shows up more on the family's social media accounts than either of her parents. However, based on this photo of Kanye and Dream, Rob is clearly still hanging around the family. He's just not doing much for the 'gram, as the kids say.

I scoured the internet for other times Rob and Kanye might have been photographed together and came up short. However, I did find one funny tweet exchange. Presumably after (maybe even during) a Twitter rant in 2018, West tweeted out: "try telling people you love them it actually feels weird at first. We're really good at hating each other. We have to get good at loving each other."

Rob replied by retweeting the post and writing, "I Love You Kanye."

Rob notably decided to skip out on Kanye and Kim's wedding in May 2014, but seems to be making up for lost time now. Earlier this year, Kylie Jenner helped Rob throw Dream an epic birthday party after the devastating Woolsey Fire ruined their original celebration plans. Fans watched as the family gathered in Jenner's household to sing "Happy Birthday" to a fairy princess Dream.

Kris Jenner told cameras, "I can't think of a better way to recover from all of the fire drama than to celebrate Dream's birthday. I'm so glad that this happened for Rob and Dream. It's a huge success."

It's unclear what #UncleYe got baby Dream for her birthday, but my guess it starts with a Yee, ends with a Zy, and comes with shoelaces...

More like this
Kim Kardashian Asked Addison Rae If She's Hooking Up With Kourtney Kardashian
By Joyann Jeffrey
Here's The Kardashian-Jenner You're Most Like, Based On Your Love Life
By Candice Jalili
A Kim Kardashian Skin Care Line May Be Coming Soon
By Margaret Blatz
Stay up to date