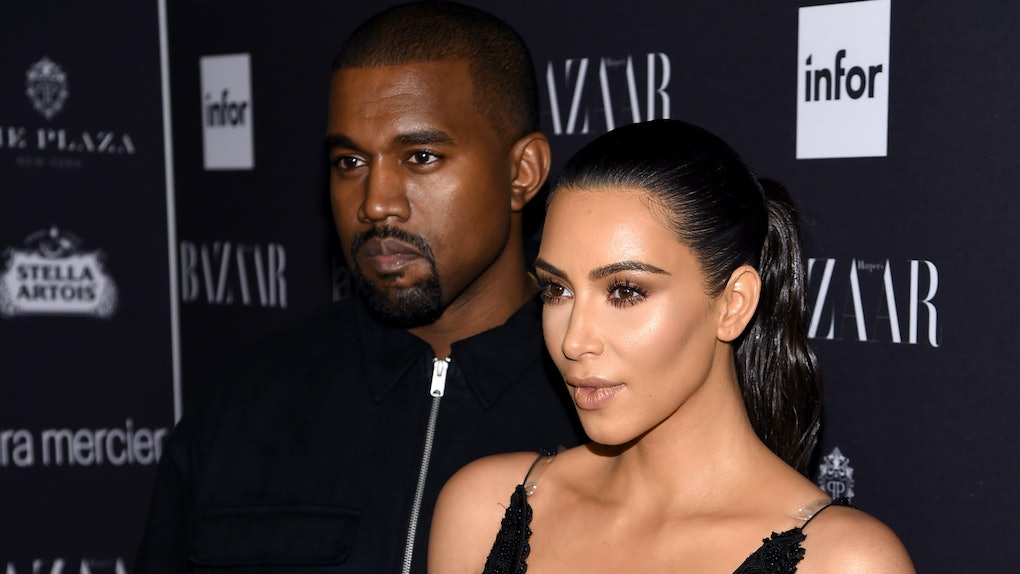 Less than a month after welcoming their fourth child into the fold, Kim Kardashian is recognizing her husband for all his help in raising their brood in honor of Father's Day. On Sunday, June 16, the Keeping Up with the Kardashians personality appeared to be taking a trip down memory lane as she shared three photos from a family vacation that shows her, West, and their two oldest kids, North and Saint, all taking a stroll on a tropical beach. Judging from the aesthetic and the fact that Chicago and Psalm are nowhere in sight, Kim Kardashian's Father's Day 2019 post for Kanye looks like a major throwback — and it's bound to give you some serious nostalgia.

ICYMI, it's been just over a month since Kardashian and West brought home their fourth child, Psalm, who was born via surrogate on May 9. At the time, the reality star announced the baby's arrival on Twitter, writing, "He’s here and he’s perfect!" For those clamoring to see the infant, she teased, "He’s also Chicago’s twin lol. I’m sure he will change a lot but now he looks just like her."

Unsurprisingly, Mother's Day was a special affair in the Kardashian-West household this year, and the makeup mogul took to Twitter just days later to share a sweet celebratory message from 'Ye to mark the occasion.

On the social media platform, she posted a screenshot of a text conversation between her and her husband, which showed that he'd written "Beautiful Mother’s Day / With the arrival of our fourth child, we are blessed beyond measure / We have everything we need," along with a photo of their newest addition.

There's nothing like a new baby to make you make you reflect on parenthood (and appreciate having a partner to ride along with you on the journey), and on Sunday, June 16, Kardashian took to social media to return the favor and let 'Ye know how much she appreciates him.

Considering that it's been just over a month since the parents-of-four brought their newest addition home, Kardashian opted to share a photo collage from a calmer time. In the images, Kardashian can be seen strolling with the "Gold Digger" hitmaker and their two oldest kids, North and Saint, on an unnamed beach. Chicago, 1, and Psalm were not pictured.

She captioned the collage:

Happy Fathers Day! You are the best daddy to our kids!!! We love you so much!

I did some sleuthing, and judging by the coloring and editing effects, it looks like the throwback photos might be from the family's 2017 vacation to Costa Rica or Bali, although Kardashian didn't specify when or where the images were taken.

Even though the couple now have one more member of the family to take care of, they have gotten into the swing of things and "have really found a way to parent as a team," an inside source told People.

That's not to say that there wasn't some initial trepidation. The source told the publication, "There were definitely points where Kim was nervous — four kids is a lot!"

Still, they've figured out a way to balance out parenting duties ('Ye reportedly likes dropping off the kids at school, and they take turns watching the kids. "She’s so happy and loves seeing all the kids interacting," the source added. "Kanye is so happy to have a big family."

From the sounds of things, it looks like this pair has got the whole parenting a newborn thing down and are enjoying getting to know the newest member of their family. Happy Father's Day, 'Ye!