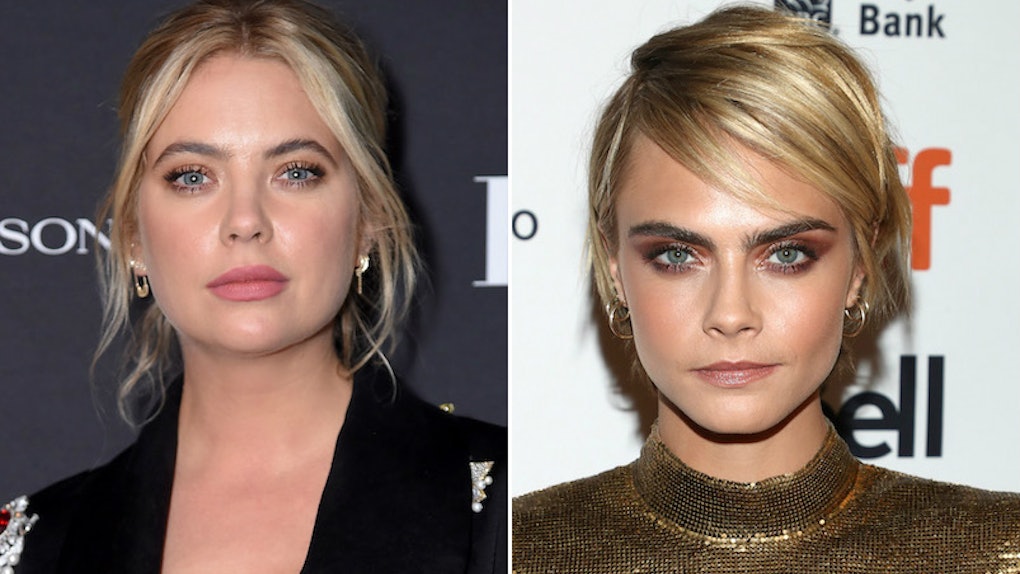 Well, this is a fun development. A new photo of Cara Delevingne and Ashley Benson cuddling in a car could be the "Instagram official" announcement we've all been waiting for. The actress and model have kept their status pretty private despite the occasional PDA moment in an airport and casual selfies here and there, but let's be real. They seem like they're together, right? They just haven't confirmed anything yet. Elite Daily reached out to both Benson and Delevingne's teams for comment on their relationship status, but did not hear back by the time of publication.

Here's the skinny behind the photo: Delevingne and Benson were reportedly attending a Chanel fashion show to view the late, great Karl Lagerfeld's final collection. On their way home from the event, stylist Jamie Mizrahi snapped a picture of the two celebrities snuggling in the back seat of a car. Delevingne looks serene and peaceful while Benson nuzzles her neck. It's... intimate. Yeah. The moment seems particularly telling because the two have clearly worked so hard to keep their relationship off of social media and away from the press.

Mizrahi shared the picture on her own Instagram feed and captioned the photo, "post show cuddle puddle 👩‍❤️‍👩 @chanelofficial." I suppose there are less cringe-worthy captions she could have chosen, but whatever. After six hours, the photo gained 12,000 likes. However, if it was shared by either Benson and Delevingne, one can assume that number would be much, much higher.

Fans sounded off in the comments writing things like, "Finally!," "Cute!," and, "OMG!"

Again, while this isn't the exact same thing as a full-blown confirmation, these girls know people are watching them. If they don't want people to think they're together, then a picture like this probably wouldn't pop up. It's now been almost a full year since the public starting linking them together, which makes it a good time to become IG official.

According to reports, the two met on the set of their joint film Her Smell which stars Handmaid's Tale hero Elizabeth Moss. They then attended Kylie Jenner's birthday party around the same time this telling selfie popped up on Benson's Instagram account:

Fans were quick to notice Benson was rocking a gold necklace with the letters "C" and "A" delicately dangling from a simple chain.

Just a few days later, the two women were photographed at Heathrow airport days after Delevingne celebrated her own birthday. In those pictures, they stood next to each other like a real longterm couple. Delevingne draped her arm over Benson like she'd made that move a million times before, and she even laid a sweet kiss smack on her lips. The Daily Mail released the photos, which again, could just portray two close friends waiting for their luggage. But, I definitely smell love in the air.

In October, a source told US Weekly, "Ashley and Cara are dating. This is the first girl [Ashley's] ever dated." The insider added, "This relationship with Cara is the first time she’s been in a healthy relationship and she feels as if it’s really easy with her.” Elite Daily reached out to Delevingne and Benson's teams for comment on the report, but did not hear back by the time of publication.

But, their relationship definitely looks easy from here. Fingers crossed!