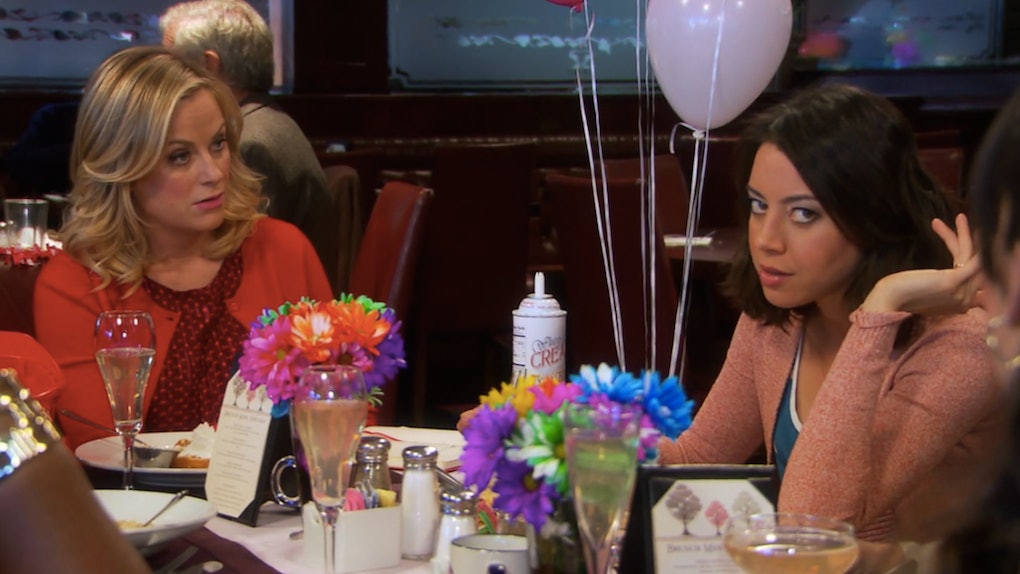 Although Parks and Recreation may have ended four years ago, the women of Pawnee are still celebrating their treasured holiday of Galentine's Day together. The invented holiday was first introduced in a 2010 episode of the NBC sitcom, when Leslie Knope explained that she likes to have a day for "ladies celebrating ladies" the day before Valentine's Day each year. Since then, Galentine's Day has transcended the show to become an unofficial holiday every Feb. 13, and this Parks and Rec Galentine's Day reunion photo proves that it is still just as important for the women who started the holiday.

Galentine's Day became a central part of Parks and Recreation fandom after the holiday was first introduced in Season 2. Leslie Knope and the rest of the Pawnee women celebrated the holiday once again in a Season 6 episode as well. By that point, Galentine's Day had already become an annual event for fans of the show, with Feb. 13 becoming a day to celebrate female friendship. Clearly, the holiday is as important to the Parks and Rec actors as it was to Leslie Knope, because Aubrey Plaza posted a photo of herself having a Galentine's Day dinner with Amy Poehler and Rashida Jones in honor of the occasion. Check out Leslie, April, and Ann's celebratory reunion pic:

And this is not the first time that the Pawnee women have gotten together to celebrate Galentine's Day on Feb. 13. Last year, Aubrey Plaza, Amy Poehler, and Rashida Jones had another reunion on the hallowed date, and that one included Kathryn Hahn (who recurred as campaign manager Jennifer Barkley on Parks and Rec) as well.

I guess this means that we can expect these Galentine's Day selfies to become an annual tradition now, which adds even more magic to the already magical holiday.

Oh, and this is only the first Parks and Recreation reunion coming our way. The entire Parks and Rec cast is reuniting next month at PaleyFest in Los Angeles. The reunion panel is taking place on March 21, and all of the main cast is confirmed to be in attendance: Amy Poehler, Nick Offerman, Rashida Jones, Chris Pratt, Adam Scott, Aubrey Plaza, Aziz Ansari, Rob Lowe, Retta, Jim O’Heir, and co-creator Michael Schur.

Of course, the most exciting part about this reunion and the biggest question on every fan's mind surrounding it is the possibility of a Parks and Rec reboot. The whole cast has confirmed that it is interested in rebooting the comedy series for the past year, and the show certainly still has the fan love to justify a return to Pawnee. There are some hurdles to overcome, though. Chris Pratt's schedule has obviously become a lot harder to work around since becoming a major movie star after Parks and Rec ended, and showrunner Mike Schur is currently helming his hugely beloved NBC series The Good Place.

Still, if the Parks and Rec team is able to figure out a way to make a reboot work, then next month's reunion panel would be the perfect place to announce it.