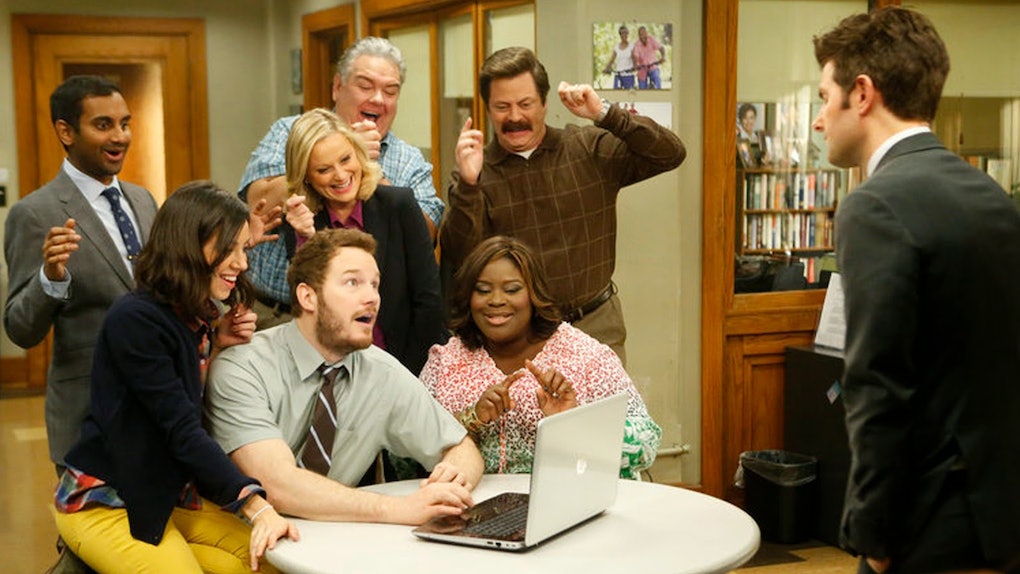 It has almost been a full decade since TV watchers everywhere were first introduced to the only person who has ever made government bureaucracy seem charming and funny: Leslie Knope. And to celebrate that upcoming anniversary, the whole Pawnee Parks Department is getting back together again. The Hollywood Reporter has just revealed that a Parks & Recreation 10-year anniversary reunion panel is set to occur in a few months, which promises to bring back the entire main cast of the beloved sitcom to reminisce about their favorite memories, reveal some behind-the-scenes secrets, and maybe even drop some news regarding those reboot rumors that just won't die down.

The Parks & Recreation reunion will headline 2019's PaleyFest L.A., which is set to run from March 15-24 at the Dolby Theatre in Hollywood. The Paley Center has not yet confirmed which date the reunion will take place on, nor has it yet released a full list of which cast and crew members will be part of the panel, but the announcement does promise to reunite the full cast of the show. Two people who are confirmed to be on the panel are Leslie Knope herself Amy Poehler and the show's creator Mike Schur. Poehler and Schur issued a joint statement saying that this reunion will be easy for the cast since they all hang out all the time anyway:

We’re thrilled to be reuniting at PaleyFest. And truth be told, we were all hanging out already anyway, so carpooling will be easy.

Although the reunion panel will not fall on the exact date of the premiere episode's 10-year anniversary, it will come pretty close. The Parks & Recreation pilot first aired on April 9, 2009, so this panel will be only a couple weeks before that important date.

This should also excite fans because it would be the perfect occasion for the cast or crew to drop any major revelations about all those reboot rumors. Throughout this past year, many of the key players in Parks & Recreation have all voiced their eagerness to get back together for a possible reboot series. Nick Offerman said he would be in at the start of 2018, and Amy Poehler said shortly afterwards that she can speak for everyone and say they would all be down for a reboot. Even the possible snag in the reboot, the now mega-famous Chris Pratt, said that he would find space in his movie schedule for a potential reboot. Tina Fey even pitched an idea for a 30 Rock-Parks and Rec spinoff series as another way to bring the show back.

But despite everyone in the cast seemingly ready to jump into a reboot, it sounds like the obstacle keeping it from happening is actually the success of showrunner Mike Schur. When asked about a reboot just last week, Amy Poehler said that everyone is ready to go when Schur is, but Schur is currently focused on his hit NBC sitcom The Good Place. Once Mike Schur is able to find some time to focus on other shows, then it sounds like the potential Parks & Rec reboot could begin gaining some traction.

We will just have to sit tight and see what news comes from this Parks & Rec reunion panel. The full list of panel attendees is going to be announced by the Paley Center on Jan. 14, and tickets will go on sale shortly afterwards.

More like this
'All-American' Star Samantha Logan Is Putting Herself First
By Rachel Varina
'Elite's Season 4 Release Date Teaser Introduces The New Cast Members
By Abby Monteil
Who Are The Touched In 'The Nevers'? Their Abilities Are Completely Wild
By Ani Bundel
Stay up to date