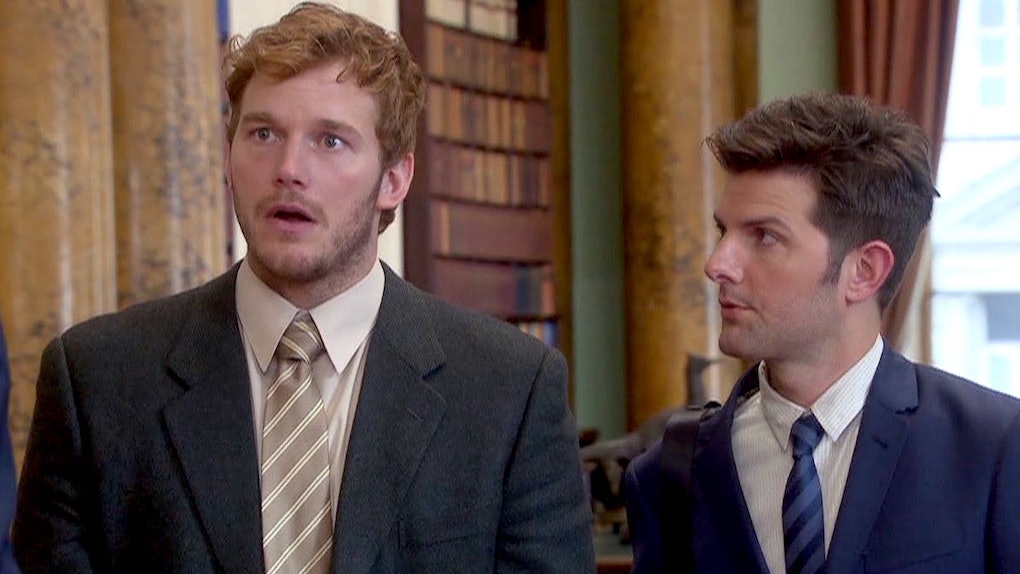 The Paley Center's 'Parks & Rec' Reunion Will Have All Your Faves, Including Chris Pratt

It is finally time to head back to Pawnee, Parks & Recreation fans! This coming April will mark a full decade since when we first met Leslie Knope and all the other eccentric inhabitants of Pawnee, Indiana, and to celebrate the occasion the whole Parks & Rec crew is getting together again for a reunion. And yes, that even includes a certain major movie star. The Paley Center's Parks & Rec reunion will include Chris Pratt, as well as all of your favorite actors from the show, the newly released PaleyFest list confirms.

Although Chris Pratt is in the midst of back-to-back press tours for his new movies The Lego Movie 2: The Second Part and Avengers: Endgame — not to mention his recent engagement to Katherine Schwarzenegger — the action star is making time to return to the comedic roots that first made him famous. While everyone from Parks & Recreation has gone on to have incredible careers in film and television following the show's ending in 2015, Pratt has definitely become the biggest name after attaching himself to blockbuster franchises like Jurassic World and Guardians of the Galaxy. Because of his demanding schedule, Pratt was the big question mark for fans when PaleyFest first announced its Parks & Rec reunion panel back in December, but now we know for sure that Andy Dwyer will be part of the reunion.

The rest of PaleyFest also includes some really exciting panels, featuring the casts of The Marvelous Mrs. Maisel, This Is Us, and more. You can purchase tickets here, and check out the full schedule below:

An Evening With Stephen Colbert (7 p.m.)

Jane the Virgin and Crazy Ex-Girlfriend: The Farewell Seasons (7:30 p.m.)

More like this
8 Theories About The 'Gossip Girl' Reboot That Simply Must Come True
By Rachel Varina
What's Leaving Netflix In May 2021? Say Goodbye To Some Faves
By Ani Bundel
'Cobra Kai' Season 4: Netflix Release Date, Cast, Trailer, Plot, & More
By Ani Bundel
Stay up to date