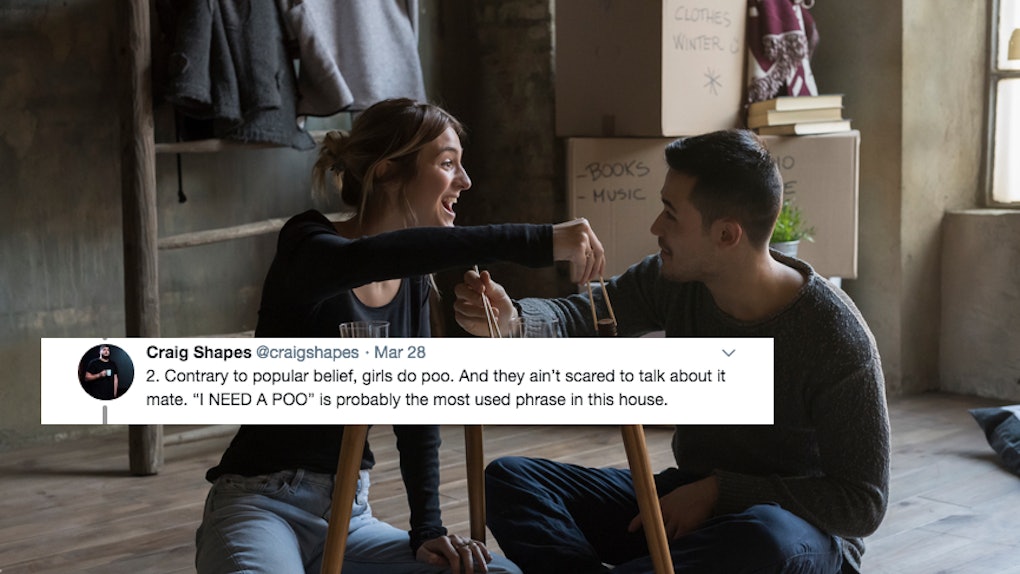 My family is very heavy on women. I grew up with a mom, a sister, and two female cousins my age who were never not with me. Yes, I did have my dad for some refreshing male energy, but for the most part, it was all ladies. Then, I went to college and lived with female roommates for all four years. And now, I live in NYC where I live with — you guessed it — more women. So it's safe to say I know what it's like to live with ladies. That said, this guy's Twitter thread about living with girls is pretty much the most accurate thing I have ever read in my entire life.

On the off chance that you don't quite understand why Craig moving in with his girlfriend and her best friend is any different from moving in with just his girlfriend, allow me to unpack this a little bit. You see, moving in with a significant other of the opposite sex is definitely an eye-opening look into the way the other person lives, but for the most part, it's happening on an even playing field. Moreover, because the two of you are ~lovers~, there might be more of an effort to keep your less desirable habits at bay in the beginning.

But when a man moves in with his girlfriend and her best friend, the dynamic completely shifts. This man is entering the land of women. Women who are, most likely, a lot more... comfortable with their best friend than they may be with their romantic partner. (Of course, everyone's different, though.) At the end of the day, this is a really awesome opportunity for Craig because, for the past year, he's gotten an unfiltered, behind-closed-doors view of what female friendships are really like.

Craig was an astute student and learned a lot from his girlfriend and her best friend, so much that he decided to make a list of 15 lessons he learned from this experience and post them on Twitter. Read along for yourself below.

Screenshots are unnecessary when every single text message you read is burned into your brain until the end of time.

Despite what society wants you to believe, girls really do poo. Because that's normal. And healthy. And everyone should poo.

Sitting on something prickly and hard? It's probably a hair clip. (Also, I fully understand how that sounded like it was about to be a dirty joke, and I'm sorry to have disappointed).

Getting ready for a night on the town is so much more than putting on some lipstick and slapping on a random outfit.

Candles come in all sorts of scents — some you would have never even imagined.

We live in a glorious time where there is truly no shortage of incredible reality television.

When it comes to dieting, every day is cheat day. As it should be.

You don't have to be a member of the CIA to be an excellent cyber stalker.

Pajamas aren't only for sleepwear.

There doesn't need to be a reason for breaking into spontaneous dance.

I think we can all agree there's nothing more devastating than cold weather on a day you expected to be warm.

Getting ready for visitors is a process, to say the least.

Why wouldn't you combine your wardrobe with your bestie's to create one giant mega-wardrobe?

GIRLS SHEDd. Deal with it!

There is no friendship quite like that shared by two women who really love each other.

That's the most key point of them all. There's something really beautiful about a real, genuine friendship between women. There's a loyalty and a depth of understanding that truly doesn't exist within any other sort of relationship. I hope everyone gets a chance to experience something like this at some point in their lives.

In case you were wondering who these amazing women are...

Now, obviously, every single female friendship doesn't conform to the 15 points Craig listed above. Those points were catered around the habits of two very specific women: his girlfriend and her best friend. Who sound freaking awesome if you ask me.

Here's the amazing trio posing for a cute pic this past Easter!

Here's to hoping we all get a chance to experience a friendship like that shared by these two women at some point in our lives.

More like this
This Couple Met On BLK & Shares A Deep, Spiritual Connection
By Veronica Lopez and Hannah Orenstein
Travis Barker Tattooed Kourtney Kardashian's Name On His Chest
By Joyann Jeffrey
Queen Elizabeth & Prince Philip's Relationship Timeline Is Legendary
By Corinne Sullivan
Stay up to date