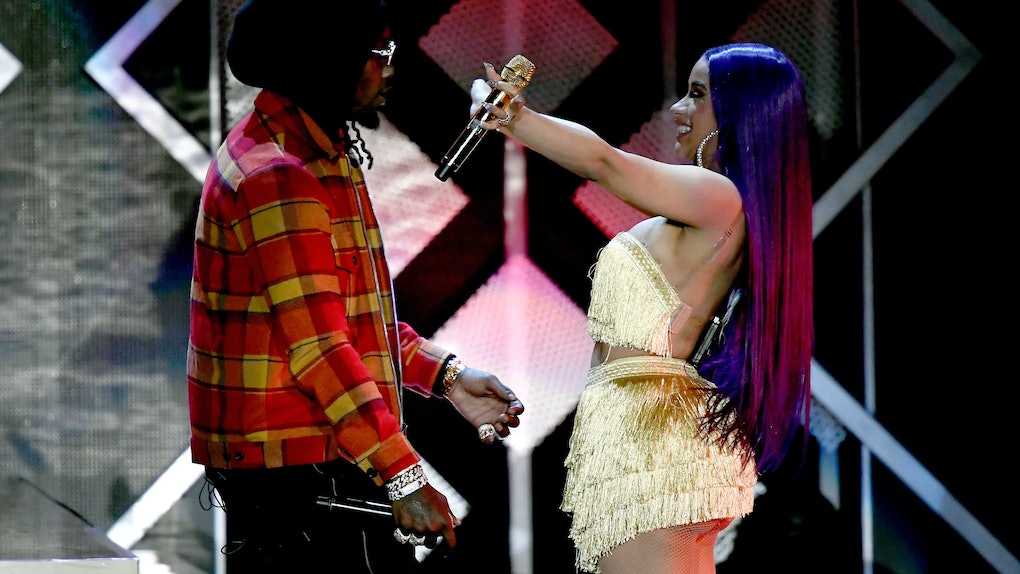 Looks like Dua Lipa was right on the money with those New Rules of hers. Especially the one where she's all, "If you're under him, you ain't getting over him." Because I've got some big news, you guys. Big! After splitting up two months ago, but remaining pretty vocal about the fact that they were still hooking up, this Cardi B and Offset relationship status update could mean the couple is getting back together for real.

Multiple sources told TMZ that Cardi has returned to the Atlanta home she shares with the Migos rapper and their baby girl, Kulture. "This is the first time she's been back to stay there with Offset and Kulture since December when she ripped into her husband for allegedly cheating," the publication reported. Elite Daily reached out to both Cardi B and Offset's teams regarding the rumor but did not hear back by the time of publication.

Here's some more proof of a reconciliation: After her assault case was postponed to April on Jan. 31, a reporter caught Cardi as she was leaving the courthouse and asked her about the status of her relationship with Offset. Here's what she reportedly said:

We're working it out, baby.

And let's not forget that on Jan. 22, the "Bodak Yellow" singer posted a screenshot of a FaceTime sesh she was having with Offset, and then added the caption "I want to go home" along with a couple of heart emojis.

Looks like she may have finally gotten what she wanted.

Cardi originally announced that she was done with Offset amid cheating allegations, via a now-deleted video on Instagram, which she posted on Dec. 5.

"I've been trying to work things out with my baby father for a hot minute now," she said at the time. "We're really good friends and you know we're really good business partners. And you know he's always someone that I run to talk to, and we got a lot of love for each other. But things just haven't been working out between us for a long time. It might take time to get a divorce, and I'm always gonna have a lot of love for him because he is my daughter's father."

So what made Cardi reportedly decide to take back her man? According to TMZ's sources, it's because Offset has finally proven himself to her. How? Well, for one thing, he reportedly changed his phone number in order to show Cardi how down he is with remaining honest and faithful to her now.

Oh, and get this: The couple has reportedly now created a new rule of their own: No groupies. Of course, both Cardi and Offset will be in Atlanta this weekend, since both rappers are performing at Super Bowl events. But according to TMZ, Offset's plan is to not allow any female fans near him during his appearances because he wants Cardi to know how serious he is about their marriage.

I reallllly hope this all works out for you, sis!