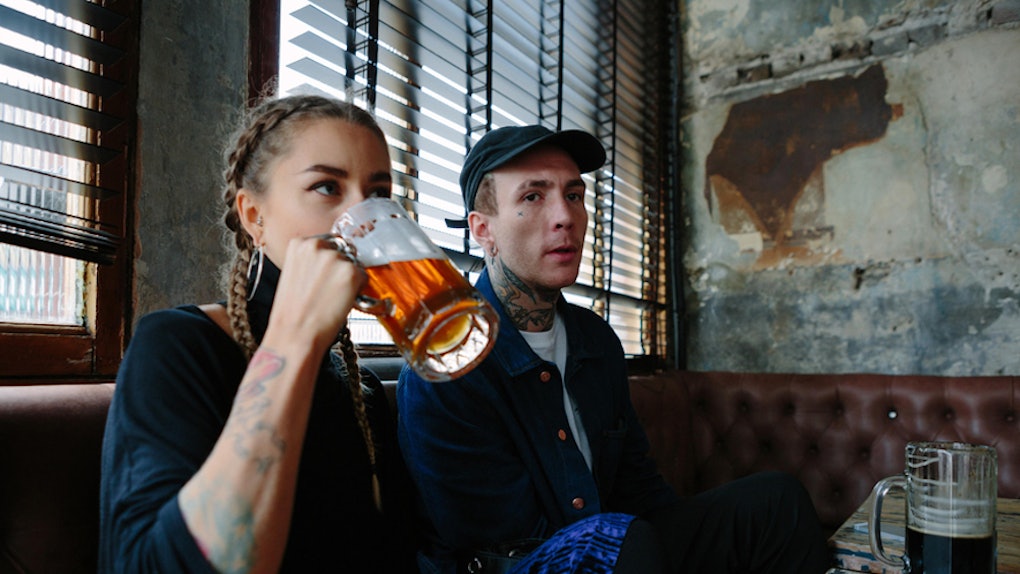 Things You Can Tell About Your Crush, Based On Their Bar Order

I'll take a tequila sunrise, please! Our mornings are meant for coffee, but when happy hour hits or the weekend comes around, many in the 21 and up crew make their way to the bustling bar scene. After a crazy week, it's nice to be able to live it up and dance until dawn. You want to stare into the dreamy eyes of your soulmate, not a screen! So, you pick out your cutest outfit and strike up a conversation over a couple of beers with your crush. Truth is, there are some things you can tell about your crush just based off of their bar order. So you really won't want to stay in this Saturday night. Take a rain check on the snuggle sesh and movie marathon, because it'll be so worth it.

Maybe you're ordering a drink during a romantic dinner, or hitting up the local spots with your significant other and your cool friend crew during a casual night out. Having a crush can be so nerve-wracking, but they had you at merlot.

There are thousands of drink orders in this world, so we'll stick to some of the more obvious signs. These 10 things will totally tell you more about your crush just from the liquor they choose to like. So, scroll down and drink up (if you're 21 and up, of course).

1. If They Order Something Fruity

Something fruity means that your crush is very flirty. They love the sweeter things in life, and that's why they're so attracted to you! Maybe they go for something mixed with pineapple juice, or that sangria that was on the list of specials. Whatever it may be, it's bound to have an orange slice sitting on the rim of the glass -- if not one of those paper umbrellas, too.

Probably one of the first things you noticed about your crush is that they're optimistic. Sure, this will keep your relationship always heading in a positive direction, but it also might mean they can be a little passive aggressive at times. Nobody likes to ruffle feathers, but your fruity drink lover will especially want keep the spirits high.

2. If They Order A Basic Beer

A basic can of beer can be the brand and brew that everybody loves, with no special notes or surprising flavors like you might find in an IPA. And if your crush chooses to drink one of these basic beers from the bar, then they like to keep it simple. They could order anything, but for now they'll just stick to what they know and don't want to study up on anything more complicated.

Playing it safe isn't necessarily ever a bad thing, but you'll both want to work at getting out of your comfort zone if you want this relationship to truly be an adventure. Make sure you find the middle ground between the two when you're together.

An IPA is a sign that your crush is a little studious, but awfully adventurous, too. They're very particular about the beer they drink, and love trying new things -- and at a bar, they'd rather take a new recommendation than settle for anything else. This will be great for your relationship because they'll always be willing to branch out. You don't want to settle for anything less than amazing, and your crush will most likely keep things interesting at all time.

Being a beer fanatic is sort of like being a gourmet or one of those passionate wine connoisseurs. They've tried every flavor, and know exactly what goes into every step of the brewing process. You two will probably have some fun dates at the best breweries around the world.

4. If They Order Something In A Bottle

Like a basic beer, a bar order that comes in a bottle is beautifully convenient. One of the messiest parts of a night out is getting spilled on over and over again. You wear certain shoes that will never see the light of day, and are sure to avoid all the sticky spots on the counter that could really wreck your cute new shirt. Your crush knows this situation all too well, so they stick to something in a bottle to keep it simple.

This is a clear sign that they're smart, proactive, and maybe even a little protective. They're probably always thinking a few steps ahead, and like to focus on the things that really matter -- like your oh-so-cute company. When you're trying to juggle a million things in life, or just making sure your drink doesn't cause a scene, nothing is getting the attention and appreciation it deserves. You'll most likely always feel like a priority in this person's life.

5. If They Order Something With Tequila

Tequila sunrise, anyone? This liquor is most definitely not for everyone. But, for your crush, it's the best thing at the bar. Maybe they go straight for a shot with some salt and a lime on the side. Or maybe, they mix it with something fruity like orange juice, so that they can truly soak up the tropical taste.

Once you get to know your crush a bit more, you'll see that this drink is a sure sign of their free-spirited soul. They're energetic, super social, and love being surrounded by the people they love. You won't ever have trouble striking up a conversation with your crush, and they'll be a true hit around your friends and family, too. Extroverts have a hard energy to match sometimes, but you'll love the constant opportunity to be outgoing.

6. If They Order An Old Fashioned

Your crush's drink order has their personality right in its name. They're totally old school, and love the finer things in life. Like Schmidt from New Girl, they tend to be a little more sophisticated and could school anyone at the bar during Tuesday night trivia. Yes, their confidence can potentially come across as a bit intimidating. But, stick with it, because this crush will also always have the little things in mind.

Since they have an old-fashioned spirit, your new boo will likely be so romantic and always remember your stories. They'll show you that chivalry is for sure not dead, and hold open every door. Think of Noah from The Notebook, and all of those sentimental moments you thought were only for the movies. This bar order is a sure sign that all of those dreams could come true.

Your crush likes to take their liquor straight. So, that's a sure sign of how they'll handle any situation in your relationship. They'll be incredibly blunt, but trustworthy just the same. They will never be afraid to speak what's on their mind. In the world of dating, this can be refreshing -- and you'll appreciate their honesty and how straightforward they are with their feels.

On the other hand, your crush's bar choice also shows that they're daring. At times, they might come across as flaky because they'll never turn down an experience, but your relationship will be so special because your bae is one-of-a-kind. Don't always try to keep up, but enjoy the ride, too.

8. If They Order A Glass Of White Wine

White wine is where it's at for your crush. Sure, they could settle for a full-bodied red, but they love to live in the moment and wouldn't want the fear of stains to get in their way. Maybe they order a nice dry Pinot Grigio, or a memorable Moscato. They're practical and classy, and likely always on a social mission.

When your crush walks into a bar, they probably know just about everyone. They somehow have friends on every corner of this Earth, but don't take it as competition. Although their life might seemingly be rooted in a passion to party, they also know when they're sipping on something good. Your crush won't jeopardize your relationship, or settle for anything less than either of you deserve.

9. If They Order A Glass of Red Wine

Red wine is like the chocolate of alcohols, and is a sure sign of romance in your relationship. No matter what your crush does, there is a note of sympathy coming from their soul. They catch feels so quick, and love diving head-first in long love stories and deep conversation. This makes them great listeners, and even better people to spend your life with because they're always so passionate.

Sure, they may prefer a solid night in to a bar scene. But, once you get them to open up, you'll surely feel the most candid connection. Wine lovers tend to have such a rich bucket list, and you two will be planning trips to Italy and the like to really embrace the sweet vibes.

The bar isn't all about alcohol, and your crush would rather get a soda than take some shots any day. Truth is, they're just super original and are never afraid to do their own thing. Maybe they have an early morning the next day, or just have a total crush on Coca Cola. They'll have a fun and flirty time just the same, and that's what you'll learn to love about them the most.

In a relationship, like anything else in life, it's all about finding a balance. They'll probably want to do their own thing during the day, but will love spending a lovely Saturday night by your side. Take their bar order as a sign that love is in the air, even when there's not some alcohol in your straw.